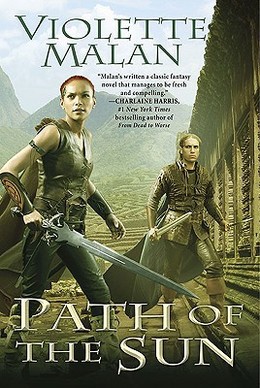 So, I decided to write a serial-killer book. All my friends were.

Perhaps I should explain. A lot of my friends are crime and mystery writers, and with them, after a few glasses of wine, the talk always seems to turn to serial-killer books. Who’s writing one. Who wants to. Who’s never gonna, no matter what. How publishers always push for one. It’s like serial killers are the new black.

Inevitably someone turns to me and says “Well, you don’t have to worry, Violette. It’s not like you could write a serial-killer fantasy novel.” Well, as you can imagine, I regarded those as fighting words – and now you know the origin of my novel, Path of the Sun.

Of course, that friend was echoing the John W. Campbell opinion on science-fiction mysteries that I mentioned a few weeks ago. According to Campbell, it couldn’t be done. Here in the community, experience has shown us that Campbell was wrong. But the attitude among non-fantasy or SF readers is still pretty much the same as his.

The trick, as most of you know, is to solve the crime – sometimes after figuring out how to commit the crime – within the parameters of our created worlds. Sometimes, we can even create crimes our pure-mystery-loving friends have never even thought of. Any common thief can steal money, the Fantasy or SF thief can steal your soul. Or a few hours of time out of your life. Or, perhaps, the best time of your life.

But let me get back to my serial killer.

I had an added difficulty because I wanted to use my series characters, Dhulyn Wolfshead and Parno Lionsmane. I’ve written about them in other contexts, but let me review. These are a pair of Mercenaries, female (Dhulyn) and male (Parno), who belong to the Mercenary Brotherhood, a cross between Samurai and Musketeers, with their own peculiar points of honour thrown into the mix. There aren’t very many of them (most die in training), but they’re generally well respected – if for nothing else than their ability to kill.

The Dhulyn and Parno Novels are secondary world fantasies, so I couldn’t draw any direct linkages between our world and theirs. In our world, we all pretty much understand the mechanism of serial killing via the various media available to us. We feel that we have a fair grasp on what a psychopath* is, even if we don’t know what makes one. Most of us know that all serial killers are psychopaths, even though not all psychopaths are serial killers. 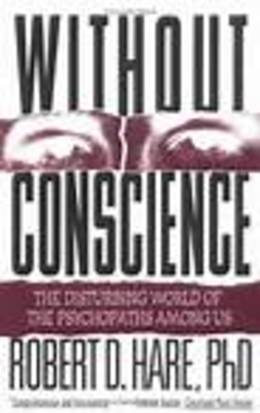 And come to think of it, the knowledge and experience you get from watching TV and reading other people’s novels is only sufficient to watch TV and read novels. It isn’t enough to write a novel yourself. Just think of all the other things those TV guys don’t get right  – you know, sounds in the vacuum of space, and women waking up with their make-up perfect.

But I think TV guys do quite a lot of research – okay, maybe not all of them, but most of them. I want to think so because they’re writers, just like me. But sometimes how things are in real life won’t work well for fake life. You know. How truth is stranger than fiction? Because fiction has to make sense, and truth doesn’t?  The slightly altered reality that, say, Criminal Minds, or Dexter, can use, can’t be taken over wholesale by another writer and applied to another situation – well, not this writer, anyway. So I did what any writer of my acquaintance does: I went to primary sources. To books, and to acquaintances in the criminal justice system.

Did I speak to any psychopaths? Well, let’s just say I think we all have, haven’t we? Though I’ll pass along the warning Dr. Robert D. Hare gives repeatedly in his excellent book, Without Conscience: don’t diagnose psychopathy unless you’ve been trained to do so. It’s not as easy to spot as they make out on TV.

Which brings me back to Dhulyn and Parno. How would they diagnose a problem for which they have no context?

The “killer” aspect of it is actually the easiest part. You need more than one killing; there’s often a ritualistic component, with repeated details that form the “signature” of the killer. In Path of the Sun, Dhulyn and Parno find the third body, establishing the “serial” aspect. Of course, these two are killers themselves, though I think that as Mercenaries they’re “seasoned” rather than “serial.” The point is that  they could function as both police detectives and forensic scientists, since they’d already be familiar with different types of injuries and wounds. With the aid of witnesses to the condition of the previous corpses, they’d be able to deduce at the very least that the same person had committed the crimes.

From my reading, I learned how psychopaths should act, what they could and couldn’t do, so I knew how my serial killer should behave, and how he could fool people into thinking he was normal. And also that he was far more likely to be a “he” than a “she.”

But as I said, we still don’t fully understand how psychopaths come to be in the first place, so how was I going to deal with that? Well, it’s not giving too much away to say that I linked psychopathy to the possession of a natural magical ability. Exactly how I linked it in what is, after all, the fourth in a series of adventures, you’ll have to read the book to find out.

*for simplicity’s sake, I’m not distinguishing between psychopaths and sociopaths

In most fantasy worlds, there would be the little question of what the psychopath’s little ritual might do magically.

With or without intention.

But it’s an interesting question. I still remember a Dragon article enumerating the rules and translating them to D&D terms. Such as “No Chinaman must figure in the story.” means “Do not exploit racial stereotypes to cast your criminal.” And how to handle the rule “All supernatural or preternatural agencies are ruled out as a matter of course.”

Mary, in this particular case, the killing ritual and magic don’t have an overlap, because the people in question don’t perform magic by ritual. But it is an intriguing idea, and I’d love to tackle it sometime, or see someone else do it.

[…] Last week, in discussing my serial-killer fantasy, Path of the Sun, I started talking about cross-genre writing. I was writing a high fantasy crime novel, but most examples of the crime/fantasy cross are urban fantasies, set in an alternate reality. […]