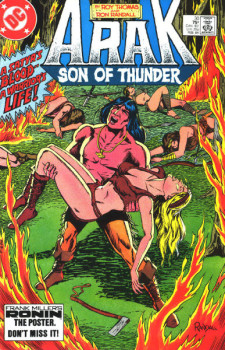 As I embark on a close reading of the complete 50-issue run of ARAK, Son of Thunder, I believe an introductory post is justified, wherein I try to rationalize why I would want to do such a thing. Why Arak? Why now? Why me? (And, for some of you: Who the heck is Arak?)

First, a series of snapshots. These will get at the “Why me?” part, I think:

* I am lying in a hammock outside my grandparents’ cabin, nestled in the ponderosa pine forest on the Mogollon Rim of Arizona…White clouds skim across a blue sky, so close you can almost reach up and touch them… The smell in my nose is pine mixed with the crisp scent of newsprint, courtesy of a Marvel Comics Star Wars and a DC House of Mysteries. 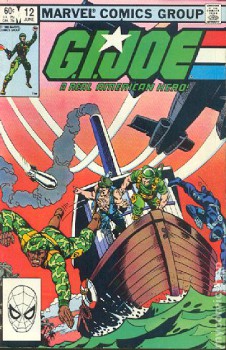 ** I am curled up on the top bunk of my bunk bed (bunk beds rocked! — they were like having a tree-house/fort in your own bedroom), home sick from school. My dad (Happy Father’s Day, Dad!) walks in bringing the latest bounty from the mailbox: the new G.I. Joe comic. I eagerly rip off the plastic bag, anxious with bated breath to find out if Snake Eyes escaped the exploding bunker at the end of last month’s issue.

*** I am pedaling my bicycle down to the local gas station, eager to check the revolving display stand to see if the new installment of ROM or Captain Carrot and His Amazing Zoo Crew has hit the stand (and, damn, I was in good shape back then, pedaling hither and yon. It was all downhill once I got my driver’s license). 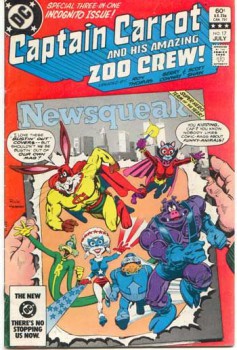 **** I am entering a strange, mysterious place with my Nan and a bevy of rambunctious cousins, encountering shadowy aisles of knick-knacks and bric-a-brac, doo-dads, tools, and unidentified objects in the junk store christened Trifles ‘n Treasures. When I ask “Mister, do you have comics?”, the grizzled old man gives me a knowing look (and a wink?), reaches behind the counter, and pulls out a dusty box full of yellowing specimens, from which I procure a couple trifles that, for me, are definitely treasures: old Stan Lee-Jack Kirby monster comics. As an adult, I have occasionally had a dream in which I come across those comics, now long gone, stashed away in some forgotten drawer — and it is like I’ve rediscovered a treasure because, even though they are not worth much in dollar value to a collector, in the dream it is like I have recovered some hidden secret of my childhood. Then I wake up, and I am bummed.

When I cast my mind way back, my most nostalgically pleasing memories are wallpapered in four-color paneled pages.

What I mean to say is…Well, I don’t know if the next generation after mine will look back, when they reach my age, with a similar sort of fondness for Nintendo Gameboys. But, man, comics are great. For me, they’ll always conjure up good feelings of days gone by.

Arak was a character first introduced in DC’s Warlord comic (another one I often picked up, because of the hook I’ll get to in a moment). He got spun off into his own series, that improbable Native American-cum-Viking, back in the early ‘80s (my formative years) when fantasy comics were having a heyday spurred by the success of Marvel’s Conan comics. When DC wanted to cash in on this success with their own fantasy barbarian hero, they were able to tap the man who wrote all those Conan books for Marvel, Roy Thomas (thanks to a temporary falling-out Thomas had with that publisher). Decked out in his new DC duds, Thomas (along with co-creator/illustrator Ernie Colón) scribed the exploits of the other son of a thunder god (in this case He-No, a Native American deity) for a healthy 50-issue run. 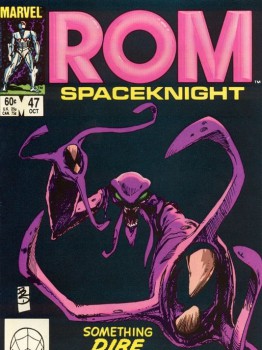 ARAK, Son of Thunder is one of the lost comics, a mostly forgotten comic book from that era when I was cutting my eyeteeth. Which is not to say it was just another among literally hundreds of titles that flooded the market during the late ‘80s and ‘90s comics boom, most of which were churned out by obscure, long-forgotten independent publishers. No, ARAK is in another category: that of once-popular titles produced by one of the two comic-book-publishing juggernauts, a title which is now only to be found moldering away in 25-cent clearance boxes in the back rooms of comic-book stores next to issues of ROM, Captain Carrot and His Amazing Zoo Crew, and Atari Force (because those boxes, you know, often aren’t alphabetized).

Thing is, some of those old titles had special appeal, a certain je ne sais quoi — all those I just mentioned were ones I read and followed for a while during impressionable years of preadolescence. Perhaps that was the “something special” about them: not necessarily something inherent in the stories themselves, but in me and others my age — ten or eleven years old and especially susceptible to the four-color adventures they served up.

In all objectivity, I must confess that when I recall such comics I am seeing them through a powerful, and sometimes distorting, lens of nostalgia. I haven’t read them in thirty years, so what I remember are impressions. A feeling, really — a frisson.

I remember little about ROM, but a two-page spread that opened one issue certainly lingers: human carcasses suspended like butcher’s meat in a sewer, the culprits — aliens that ROM has come to Earth to oppose — lurking in the shadows (man, how did that get past the Comics Code Authority?).

And I remember Arak leaping from the pages of his comic, looking bad-ass with his sinewy muscles and his tomahawk and his mohawk and his pet hawk (did he have a pet hawk? Because that would be funny: a trifecta of ‘hawks.) 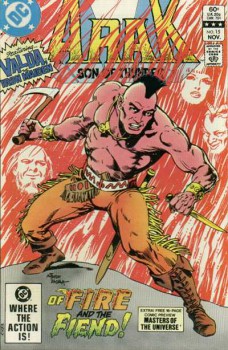 Let’s get this out of the way: what drew me to such comics — the hook — was always, first and foremost, monsters. Dinosaurs and aliens fell into this category. I was psyched for anything that was not part of the world we know, and the stranger the better. Giant animals, like when characters are shrunk down to the size of LEGO figures and the household cat is suddenly a menace, didn’t count: it was still just a cat. I wanted things that didn’t really exist in any size, except in the fossil record or in my imagination. And the more the merrier. I wanted “The Monster Mash,” All Monsters Attack mayhem. If you wanted to market a comic to the young Oz, slap several distinct monsters on the cover. You got me.

And ARAK often did.

So now, thirty years later, an older (and somewhat wiser — but still crazy for monsters) Oz is going to revisit his old friend Arak. I picked up the complete run for a smokin’ deal on eBay.

Join me here next week for the reunion.

Looking forward to it.

Never read Arak — I didn’t do DC back in those days, alas. But I still have something close to a complete run of ROM in the longboxes in the closet. And less-complete runs of Micronauts and Shogun Warriors. I look forward to learning more about what I missed.