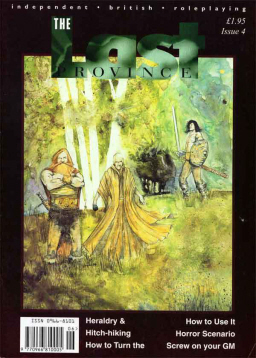 I recently stumbled across a copy of a gaming magazine I’d never encountered before: The Last Province, a bi-monthly British publication that apparently lasted five issues, from October 1992 to September 1993.

This doesn’t happen very often, so it was definitely worth investigating. And I’m glad I did, as it turned out to be a delight.

I think the cover — a Martin Lennon character study of three very different adventuring fellows striding confidently across a green and pleasant land — effectively communicates both the content and editorial attitude. If the art doesn’t do it, the tag words “Independent British Roleplaying” at the top should give you the idea.

Paz Newis’s page 4 editorial is a perfect mix of defensiveness towards gaming stereotypes, and contempt for what others consider ‘normal.’ Pretty much exactly how I remember gamers talking in the 90s.

To my mind ours is one pastime with a wealth to offer its participants. It is to those of you who wish to take roleplaying out of the ‘spotty adolescents’ stereotype that this magazine is aimed.

Recently… I thought it would be a good idea to sit in front of the television. I was appalled! It really was brain numbing. All of my higher brain functions seized up. If this is what the majority of ‘normal people’ spend their time doing I have no desire to be normal.

The news section is jammed with headlines on the big events of the day — including Steve Jackson’s quarter-million dollar judgment against the US Secret Service for seizing their computer equipment during an investigation of GURPS Cyberpunk, the report that a young employee at a Glasgow branch of a well known game store chain was apparently fired for being female, and the release of a major new RPG from FASA with the strange title Earthdawn. 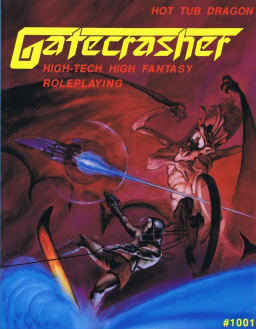 There’s lots of reviews in The Last Province, and they are generally excellent. They give a 6-star (top ranking) score to the first release from an obscure west-coast company called Wizards of the Coast, The Primal Order, and Avalon Hill’s early Runequest adventure Shadows on the Borderland.

But they are just as free with their derision as with their praise, as Malcolm Campbell’s review of the long-forgotten Gatecrasher RPG illustrates:

This has to be the worst role-playing system I’ve seen in a long time. Character generation is largely random, with little choice left to the players. The system is slow, complex, and inflexible. The group of players I arranged to playtest the game with were cringing before they’d even finished generating characters…

Don’t waste your money, it’s a real turkey. And if anyone wants my review copy, PLEASE come and take it away!

There are interesting features as well, including a lengthy examination of heraldry, “Ten Ways to Crack a GM,” and a nice-sized Chill adventure featuring a very nasty hitchhiker, “Motorway Psycho.”

The center section is given over to pull-outs for a fantasy scenario, “The Tower of Gervaen Magnus,” an adventure for a team of wizard familiars. Kind of neat, and the maps look quite intriguing.

The back half has all the things you’d expect of a top-notch gaming mag: some entertaining columns, a comic, book reviews, and even classified ads. Some of the highlights include Phil Masters’s look at the fiction of Cordwainer Smith and Karen Newis’s  miniatures column, “Flash in the Pan.” 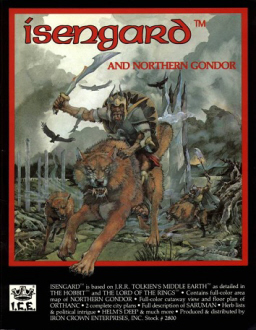 Of course, I can’t resist looking at the classifieds, even if they are two decades out of date. There are plenty of folks looking for people to join their gaming circle:

Grand Duke Andrew of Geoff is ecstatic to announce the execution of Ninevan de Kasomvak, assassin, murderer, philanderer and Agent provocateur. Hung by the neck until dead. Ha.

And of course, collectors were already frantically on the hunt for out-of-print Middle Earth Role Playing supplements: 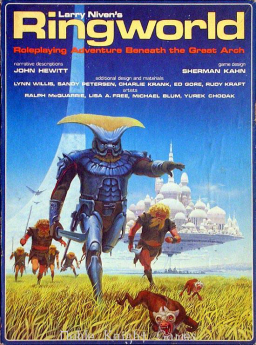 However, the article I read with the most interest was Alex Tingle’s Revenant column, in which he examines the criminally under-appreciated RPG Ringworld from Chaosium, originally published as a box set in 1984 with Ralph McQuarrie cover art.

This game is big! Everything about it is larger than life, not least the structure referred to in the title. The Ringworld is a huge, enormously strong artificial ring, built to encircle a star, and spun at 770 miles per second to provide comfortably earth-life artificial gravity…

John Hewitt, an independent writer, wrote much of the narrative in conjunction with Niven himself, and Chaosium worked a system around it. Unfortunately the game was doomed to be withdrawn almost as soon as it was released.

Ringworld works on many levels. As a source of background information on Larry Niven’s Known Space it is unsurpassed. Niven himself has acknowledged this in the introduction to his book The Man-Kzin Wars… also, the game is perhaps the ultimate version of the Runequest/Cthulhu system. It is simple, elegant, and complete.

But much more importantly, Ringworld is a science fiction role playing game. The science fiction is believable and optimistic, in contrast to the grim and gritty science fiction games that are common these days… Ringworld‘s explorers are not grubby mercenaries constantly scrambling for the next credit. Instead they are adventurers from an enlightened age, seeking knowledge and excitement for their own sakes.

I think that may be the true reward for reading magazines like this, for old-time game collectors like me. It transports us back to a time when the fabulous, dust-covered treasures in our basement were appreciated and celebrated, and reminds us that, at least at one time, others once thought as we do.

The Last Province, issue #4, was published in June 1993 by Last Province Publishing, Ltd. It is 78 pages, priced at £1.95. I paid $6 for a copy in excellent condition on eBay earlier this month.

It is fun to look back at these hidden gems.

Right — the good and the bad!

what a great cover for the Last Province!

I wonder if the name “Gatecrasher” is no longer under copyright, because that is a great title for a game. The name alone almost makes me want to play it–until I read that review.

It was the cover that first captivated me. It’s a terrific portrayal of a confident adventuring party, and the pastoral setting seemed obviously medieval England, so the whole thing said “Independent British Gaming” long before I saw the tag line at the top.

I agree! And after 20 years, I expect you could probably acquire the name for a song, even if it’s not in the clear yet.