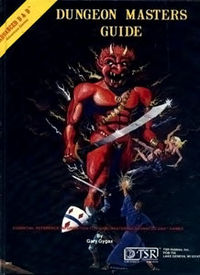 The way I see it, there are two types of Dungeon Masters — two archetypes, if you will: The Storyteller and the Rules Stickler. Of course, most game masters are some mix of both, but I’d like to try to describe these two different styles or approaches to RPG refereeing. And I’d love to hear from folks who are DMs as well as from players who have gamed with one sort of DM or the other.

In the comments section of this blog a few weeks back, an interesting conversation developed about these different styles of dungeon mastering (or game mastering, if you’re not talking exclusively about Dungeons & Dragons); specifically, the broad spectrum between the DM who is a rules stickler and the DM for whom the rules are, at best, optional suggestions. It was intriguing enough that I promised to revisit the topic in its own post.

Here we are. So get your gear (if you’re a rules stickler, be sure to add up encumbrance values and calculate any penalties), pack your Bag of Holding (don’t forget those rations — unless you have a sorcerer who can conjure up food as needed), and get ready to delve into the depths of the dungeon master’s id.

For mapping out this subject, I’m going to focus on the two ends of the spectrum, recognizing that most game masters fall somewhere in between these two extremes. I’ll call them the Rules Stickler and the Storyteller. But first, an observation that applies to the whole lot of them that don the mantle of master…

One of the variables of tabletop RPGs, a fascinating aspect of its social (read: human interaction) nature, is that the rules are malleable and shaped to some extent by the personality of the person sitting behind that Dungeon Master’s screen. Unlike an online RPG controlled by a program that runs automatically at one remove from its programmers and cannot be reasoned with or tweaked (unless you’re a hacker), on the tabletop the DM calls the shots every step of the way.

Sure, the players, if they are conversant with the rules, know when they get to roll the 20-sided die and what bonuses they’ll get to add from their dexterity or their magic item or whatever. Nevertheless, the DM can add any offsetting variable he thinks appropriate. He can override the outcome and, unless he is faced with a player mutiny, so it stands.

So how does each individual DM choose to exercise this (fictional) life-and-death power?

The title is pretty self-explanatory, but here are a few thoughts about the DM who studiously consults every table and keeps track of all the minutiae, all the niggling details.

First, this style of refereeing hews most closely to an automated game system; it’s just a helluva lot slower than a computer. If keeping track of all these calculations was the only, or even the primary, role of a DM, then like so many other jobs that have been replaced with robots, it would have been automated long ago. However, a campaign with even the stickliest rules stickler offers certain discrete benefits that a computer game cannot replicate:

1) the physical, face-to-face interaction and socialization of a tabletop game;

2) the open-endedness of the campaign and the flexibility of a human DM to allow the players to pursue any course of action they want;

3) the role of the imagination in picturing the scenario with few or no visual cues (save perhaps some miniatures to help players orient where their characters are in a given situation).

With regard to the third benefit, as graphics improve, computer RPGs paradoxically become less and less capable of substituting for that distinct pleasure of using one’s imagination, which so many people who are drawn to traditional RPGs find appealing. The lush 3-D graphics of the latest online games leave nothing to the imagination. That sort of visual stimulation has its own appeal, of course, but it will not replace the pleasure of seeing in the mind’s eye — indeed, no more so than movies replaced books. 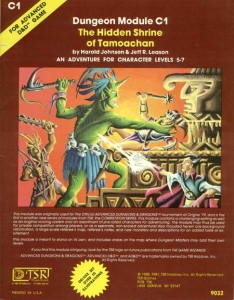 My second observation about the Rules Stickler is that she tends to be driven by a desire for realism, that is, realism within the framework of the game’s world. Sure, it can be a world full of mythical creatures and physics-defying magic, but when that ettin swings his club and lands a direct hit on the barbarian, the rules stickler wants to know exactly what the consequences are. The rules for determining those consequences can get pretty complex, too: optional rules that go beyond just loss of hit points are often adopted by those who want more verisimilitude in their games, providing tables one can consult to determine which segment of the body the weapon struck. Obviously, a heavy blow to an arm will have a specific effect (perhaps rendering the arm useless) that is distinct from a heavy blow to a kneecap.

There are two potential drawbacks to this rules-heavy style of gaming. The first, alluded to earlier, is the inevitable slowing down of the game as books and tables are consulted and rules are cross-referenced. This is anathema to the Storyteller — for whom “The play’s the thing!” or  the story must come first.

The second drawback, which can vary from a minor annoyance to the downfall of a campaign, is when this rules-before-story approach infects a player. In role-playing parlance, sometimes a “munchkin” is born. This is a slang term for a character that a player “maxes out” by taking advantage of the letter, rather than the spirit, of the rules. The player will exhaustively work out every combination of magic item, skill, talent, feat, and ability, consulting every officially licensed supplement, to achieve unintended consequences and outfit a character for maximum destructive potential. Needless to say, such players tend to downplay character development (emotions, personality traits, weaknesses — all of which could hinder the single goal of carnage), treating the character more like a one-dimensional avatar out to “win” the game — a sensible approach to a computer game, but one that is virtually nonsensical for a traditional game that has “role-playing” in its title.

Still, there is something to be said for the framework of stability provided by rules, for the predictability without which the game could devolve into a chaotic sort of Wonderland. And let’s face it, rules are part of the fun, what puts the “game” into role-playing game. Without them, we’d just be sitting around a table making up a story. Which brings us to…

My friend Gabe is a good example of a DM who takes the storyteller approach, although he does not lean all the way to the hypothetical extreme I’ve posited here to give us our spectrum’s bookends. He knows the rules; he uses them. It’s just that for him they’re more suggested routes than they are train tracks. You can veer from them at any time, in service of the story.

His players do regularly roll dice, while they consult their character sheets and he consults a table. Rolling dice is fun (and I’m sorry, but another thing computer games will never replicate is that tactile feel of all those crazy-shaped dice). The outcome of a roll often provides a good deal of the suspense of the game. Is my character’s brilliant gambit to get across the chasm to reach the gem-encrusted idol going to work, or am I in for a nasty fall? Is my arrow going to hit its mark right in the bull’s-eye, or am I just going to tick off this one-eyed bull?

But here’s my friend’s (not-so-secret) secret: Most of the time, the success or the failure determined by a die roll stands, and the adventure proceeds accordingly. But on occasion, if his storyteller’s instincts tell him one outcome is going to serve the unfolding narrative far better than another, he will make sure the better outcome comes to pass. Understand, we’re talking “better” outcome in terms of the narrative — it could be the worse outcome for the player.

And so, for such a pivotal moment, he’ll have the player roll the die. Let’s say the player rolls a 13. Kind of a middling number; could go either way. If Gabe is thinking the player’s quirky idea for getting the character across the chasm to reach the idol is so ingenious it’s the sort of thing that would go down in campaign lore, he might declare, “A 13 was what you needed — Beeble just barely makes it by the skin of his teeth.” If, on the other hand, Gabe is thinking that the characters absolutely cannot reach that idol yet because it would scuttle the whole story arc, then he might say, “You needed a 14,” and Beeble had better hope he’s wearing a Ring of Featherfall.

I can hear some protest, “He’s usurping the role of God!” Well, yes, if your god is the blind, random roll of the dice.

The storyteller DM sees his/her role as more than just a rules-keeper. He/she sees the campaign as a spell being collaboratively woven by the DM and the players. As such, the DM occasionally exercises the role of editor, overriding or ignoring a rule that would hinder the spell.

It’s worth noting that the rules stickler and the storyteller may reach the same game developments via different avenues. For instance, in a rules-heavy campaign a character might lose an eye based on the DM’s consulting of extra tables for severe wounds. A rules-light, story-first DM might also deem that a character has lost an eye from a grievous blow but does so on gut instinct, recognizing the colorful detail and narrative possibilities of a one-eyed elf.

I’ll end by reiterating that most game masters fall somewhere near the middle of the spectrum, incorporating elements from each style. I think the best DMs can navigate both, reliably steering the players along while nimbly juggling the sheer storytelling pleasure of the unfolding journey and the essential rules of the game.