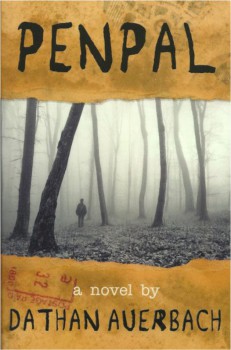 It began in October 2011, when an anonymous poster on Reddit, going by the username 1000vultures, posted a creepy little short titled simply “Footsteps.” Over the following weeks, the fanbase for 1000vultures swelled as five more stories were posted. Eventually, Dathan Auerbach (the author’s “civilian” name) began the process of revising those six little pieces, connecting and expanding them until he had his first novel, Penpal. After a successful Kickstarter campaign (where he made more than ten times his initial goal), he was ready to publish the thing.

Honestly, I picked up all of that after the fact. I’d never frequented Reddit’s No Sleep page, nor did I catch the Kickstarter campaign when it was going on. I just heard about a creepy little book by a new name on the horror scene and thought I’d check it out.

The book is broken into six parts, each set in a different point in the narrator’s childhood. Taken together, the stories come away like snapshots of one great horror, taken from different angles. The first story, “Footsteps,” evokes the universal fear felt by every child at least once: the fear of being lost. “Balloons” is the story that lays out the groundwork for what is to come. “Boxes” takes the story out of being strictly psychological horror and into something more physically threatening. “Maps” is the point when we are shown that the mystery might truly be something unknowable. “Screens” is the point when the author lets some of his own influences show. And the last story, “Friends,” wraps up the cycle with a couple surprises and a revelation of what truly is the heart of the story.

To be sure, this is the author’s first novel and there are some learning curve mistakes made in the narrative. The only problem I really had with the story was a sort of floating timeline. Ordinarily, it shouldn’t matter in what specific year a story takes place, but cell phones and the Internet seems to float in and out of existence. (Seriously, how do you not know how to find somebody’s phone number?) Otherwise, it’s a creepy little novel from a rising talent who hopefully produces many more.