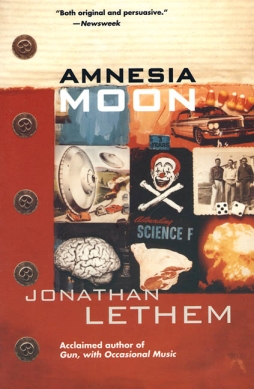 Not long ago, I came across a copy of Jonathan Lethem’s second novel, Amnesia Moon. I was curious: Lethem’s best known for his recent work in mainstream mimetic fiction, but his early novels were science fiction and he also wrote an odd take on Steve Gerber’s already-odd character Omega the Unknown for Marvel Comics in 2007. More, between 2007 and 2009, he edited three volumes for the Library of America collecting various novels by Philip K. Dick; another book Lethem edited — The Exegesis of Philip K. Dick, containing extracts of a journal in which Dick recorded his visionary experiences — was published in 2011. Lethem’s also written an introduction for a recently-released collection of Dick’s short fiction and explored the influence of Philip K. Dick on his work and life in an extended essay at his web site. Given all this, I was interested in seeing what Lethem’s early science fiction was like.

Reading Amnesia Moon, the Philip K. Dick influence is immediately and strongly apparent, in setting, tone, imagery, and structure. The novel takes place in the west of a near-future post-apocalypse United States, but nobody can really remember what the apocalypse was, or how long ago it happened. Robot evangelists preach the gospel at city corners. Some characters live only as drugs, visible only after they’re injected into the veins of someone else. Dreams are communicable. But more than any of this, the book seems to restart itself at unpredictable intervals, dropping all the narrative strands to begin what at first seems a different story, which then intersects or transforms the overall tale.

Still, Lethem’s book isn’t just a rehash of earlier work. It’s strongly evocative of Dick’s writing, yes, but has a voice of its own. Its theme, I think, is the connection between people, the communities and relationships that they make. So it insists on the reality of the perceptible universe, on the otherness outside oneself, in a way that seems to me to be unlike Dick; Lethem’s asking much the same questions, but suggests different answers. As a result, though Lethem’s style is as spare and fast-moving as Dick’s, the characters have a reality and solidity subtly unlike the characters in Dick’s fiction. 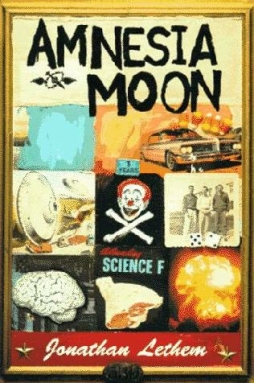 The book begins with a man carrying a message to a man named Chaos, who lives in a projectionist’s booth in an abandoned movie theatre in what used to be Wyoming. Then the perspective shifts: this is Chaos’s story. We follow Chaos as he picks up a sidekick named Melinda, a mutated thirteen-year-old girl with hair all over her body, and sets out in search of a better life — his older life, which Chaos doesn’t remember, as a man named Everett Moon. All through the book, memories come and go, lives and dreams of lives pass through his head; and Chaos’s dreams are dreamt by people around him, as he seems to develop a talent to alter reality itself. His voyage takes him through a number of separate communities created by people in the wake of disaster; finally to San Francisco, where he finds out some (not all) truths about the world and himself, before he doubles back to resolve unfinished business.

The different places Chaos goes read as Dickian conceptions. They all have some element of social parody, aspects of late 20th century American life (the book was published in 1995) blown up to a grand scale. Perhaps most significant is a concern with media; from Chaos’s home in a defunct movie theatre to a community where government officials are movie stars and comic-book heroes, there’s a fascination with the way stories shape us. It’s part, I think, of a larger concern with social programming, and how we build ourselves, and how what we believe is shaped by forces outside ourselves — the robot evangelists being a particularly stark symbol of this.

In that way, the book’s examining identity, consciousness, and individuality; a properly Dickian theme. Chaos, or Moon, regains and loses memory throughout the book, as do other characters. His body is transformed. At his lowest point, he literally becomes a thinking clock. But his dreams can remake the world. These are literalised metaphors, but they’re also living images: it all fits together in terms of plot and of theme. And they build through the book, to a conclusion that deliberately forsakes answering questions in favour of undermining the implication throughout that Chaos/Moon is the centre of all important events: a final acceptance; not that he’s powerless, but that there are other people with their own importance. That, under the influence of forces we cannot otherwise perceive, we all move around each other like the moon around the earth. 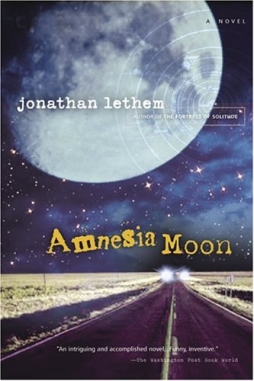 It’s interesting reading the book and knowing that Lethem’s moved on to mimetic fiction. As I said, it’s as spare stylistically as Dick’s work, with minimal description. But there’s a grounding in reality that is not so much at odds with the more hallucinatory or satirical aspects of the work as a distinct complement to them. There’s a complexity implied in the societies of the book, in the images and metaphors it uses, that gives it a different tone than Dick’s fiction. Above all, there is that feel of reality to the characters, a depth perhaps implied by the minimalist prose, but nevertheless very real. In this book, that sense of character works to make the story more credible and indeed coherent — these are fully-realised people in improbable situations. But perhaps you could argue that the book’s conclusion, that insistence on human relationships, points to a set of concerns that lend themselves to mimetic fiction.

I don’t think I’d say that Amnesia Moon is a major work, but it’s a very good minor work. That’s fitting; it’s most reminiscent of Dick’s minor writing. It’s brief, but covers a lot of ground without feeling like it’s hurrying through matter or leaving elements underexplored. Its world is disparate, confused, and therefore much like reality. It bears its influences on its sleeve, but makes something new out of them. All in all, it’s strong writing.

A fine review. I enjoyed Lethem’s first novel, GUN WITH OCCASIONAL MUSIC, although I hated hated (hated hated hated) the ending – so much so that I’ve never picked up anything by him since.

John, I can vouch for Lethem’s Motherless Brooklyn, a book that satisfied from start to finish and left me wanting to be a better writer.