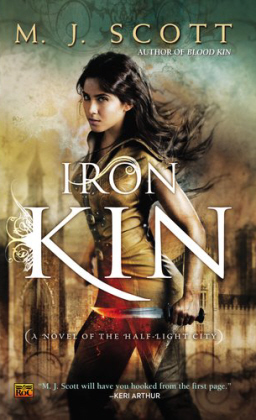 We work in a genre ruled by series. It makes for some tough choices sometimes.

Case in point: I just received a review copy of M.J. Scott’s new novel Iron Kin. It looks like a fun, quick read with an intriguing setting and what could be a genuine POC on the cover:

Imagine a city divided. Fae and human mages on one side, vampire Blood Lords and shape-shifting Beast Kind on the other. Between these supernatural forces stands a peace treaty that threatens to shatter at the slightest provocation….

I was raised to do the right thing. But to my family that means staying safe behind the walls of human society. To be a respectable metalmage and never put myself at risk. But the treaty is faltering. And if it fails, nothing is safe. To help save the city and everyone I care about, I will use whatever means I can to ensure the negotiations to renew the treaty are successful — even if that means forging an alliance with a man who is the very opposite of the right thing….

Fen is trouble. Wild. He would rather bind himself in iron and drink himself into oblivion than learn to master the visions that come to him. Those visions might just hold the key to peace, and it seems that my power might hold the key to his control — if I can keep it around him….

Normally I’d plop down in my big green chair with my dog Pepper at my feet, and give it a try. Except for these tiny words at the bottom: A novel of the Half-Light City.

In the fantasy world, that’s code for: This isn’t the first book, dummy. According to a hasty Amazon search, Iron Kin is actually the third book, following Shadow Kin (2011) and Blood Kin (2012), neither of which I have.

And that brings us to those tough choices I mentioned. Do I set it aside and set out on a quest for the first one? Or do I settle in with Iron Kin, and figure things out as I go? 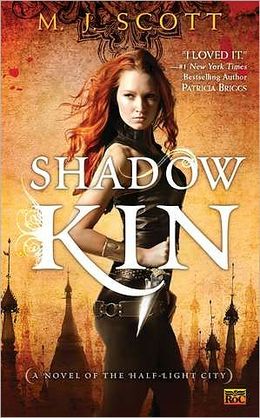 I know, this problem is hardly new. And that’s part of the issue. It’s repeated every time I go to the book store. Half the time I pluck some novel that catches my eye off the shelf, it’s the third or fourth installment in a series. Which means that I’m expected to put the novel I want back on the shelf, and dutifully pick up some book I might not want — that’s even if it’s in stock at all.

Of course, there’s nothing that says I have to put the book down. It’s a free country. I can start in the middle of the series if I want. So there, marketing department.

That path has its own risks, mind you. The best fantasy series are much like situation comedies, in that half the fun has nothing to do with the plot, but in the interplay and tension between characters you love.

And then there’s the issue of spoilers. If I really enjoy Iron Kin, I’m going to want to go back and read Shadow Kin and Blood Kin… but of course, any surprises will be ruined.

You have to take it case by case, I think. The book description I found online for Shadow Kin is a little slimmer than its sequel, but no less intriguing:

On one side, the Night World, rules by the Blood Lords and the Beast Kind. On the other, the elusive Fae and the humans, protected by their steadfast mages…

Born a wraith, Lily is a shadow who slips between worlds. Brought up by a Blood Lord and raised to be his assassin, she is little more than a slave. But when Lily meets her match in target Simon DuCaine, the unlikely bond that develops between them threatens to disrupt an already stretched peace in a city on the verge of being torn apart…

Hmm. Blood Lords and wraiths? A divided fantasy city? Sounds worth a little inconvenience to me. Gone is the beautiful woman of color on the cover, replaced with a generic redhead, but I know better than to believe the cover model has anything to do with the main character’s appearance.

And so, curiousity wins out over impatience. I set Iron Kin aside, and I’ve ordered a copy of Shadow Kin. I’ll let you know when it arrives if the wait was worth it.

Start a series in he middle! That sir is blasphemy!

But seriously couldn’t ever bring myself to start a series in the middle I just feel like I’d miss to much. Many of these large fantasy series books don’t even have a beginning middle and end they just keep going.

Maybe it’s just because a big part of my enjoyment comes from the build up of events.

I think you hit on something I missed. The build up of events is a crucial part of many fantasy series, and definitely the best ones. It’s not just a matter of plot spoilers – jumping into the middle of a good series robs you of the escalating tension and the unfolding reveal of the setting. I’m with you that starting in the middle is generally a poor choice.

Mind you, some of the best fantasy series can be read in virtually any order. Conan and Fafhrd and the Gray Mouser come to mind.

The last real I risk was the first new “best selling” fantasy I’d read in years: Abercrombie’s THE HEROES. I bought it, but couldn’t really tell if it was part of a series or not . . . so I went against my usual proclivities and went for it. And I’m glad I did! Hard to say if reading his other books would have really mattered or not; I certainly don’t feel I missed anything. But I’m sure as hell glad I read it, despite it sitting on my shelf unread for over a year.

There are series where it’s not serious to pick them up in the middle — but there’s no way to know that without reading them first.

> Abercrombie’s THE HEROES. I bought it, but couldn’t really tell if it was part of a series or not…

My understanding is that, while THE HEROES shares a setting with Joe’s First Law Trilogy (The Blade Itself, etc), it is in fact a standalone novel. So it sounds like you made the right call. 🙂

> There are series where it’s not serious to pick them up in the middle — but there’s no way to know that without reading them first.

Another reason why picking up a fantasy novel means doing some homework first. For me at least, I have to check various online outlets to make sure I’m not accidently backing into a trilogy or something.

Sometimes it seems the days of picking up an exciting new novel in the bookstore and reading a third of it on the bus on the way home are over.

Maybe it’s just me, but the cover of IRON KIN seems to showcase a woman who looks Middle Eastern, perhaps Lebanese or Persian? Anyway, that added another element to its exotic nature. It wasn’t just another novel about white folks in a fantasy version of Europe.

SHADOW KIN’s cover is similar in almost all respects except that the cover model is white. For whatever reason, that didn’t catch my eye nearly as much.

John,
Funny you mention that. I was just having a conversation last night with a traditional publisher concerning POC and the death sentence it puts on a book if you use one. Not sure this cover is actually a POC, it could be argued either way. Whatever the case, it is a sad world we live in since that seems to be the case.