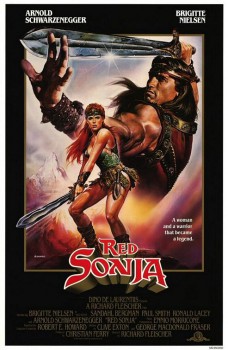 After watching the Red Sonja film, many viewers will find themselves asking why the film was made. Who was responsible? How could such a thing happen?

It began in 1982, with the release of Conan the Barbarian. That film’s success led to the release, two years later, of the far cheesier Conan the Destroyer. Red Sonja appeared the following year, bringing an embarrassing end to what could have been the sword & sorcery equivalent of James Bond.

But first, the plot. After resisting the sexual advances of Queen Gedren, the evil lesbian sorceress has Sonja’s entire family murdered before ordering her men to rape her.

No, really, save your complaints until the end of the review.

Sonja is visited by a ghost that gives her the strength to best any foe in combat. After training for an indeterminate amount of time, Sonja is approached by Lord Kalidor (played by Schwarzenegger as basically Conan with pants), who takes Sonja to visit her dying sister.

Yes yes yes, her entire family was killed ten minutes earlier, but apparently her sister Varna was out with friends or something.

Varna warns Sonja that Queen Gedren has gotten hold of the Talisman (gah, think of cooler names for your artifacts), which will give her the ability to rule the world by causing earthquakes. Or something. The Talisman can only be touched by a woman, so Varna makes Sonja swear she will destroy it. After swearing an oath and building a funeral pyre for sis, Sonja goes off on her quest. She is followed by Kalidor, as well as the boy-prince Tarn and his assistant, Falkon. They fight some bandits, the phoniest-looking sea monster you’ll ever see (seriously, even the characters realize it’s just a prop), and finally the evil witch-queen herself. Spoilers, the Talisman is destroyed, Red Sonja pretty much chucks her vow, and the Conan film franchise is forced into hibernation for decades.

So how does the film differ from the comic? First of all, most noticeably, there’s no chain mail bikini. Sonja still has a bit of skin on display, but it’s safe for family viewing (other elements of the film aren’t, but the outfits are fine). There’s surprisingly little supernatural elements in the storyline before the fight at the end with the sorceress, and even that degenerates very quickly into a standard sword-fight. Curiously, either by accident or design, Sonja’s story (watching her loved ones killed by a monarch-magician against whom she swears revenge) loosely mimics the one established for Conan in the first film. In fact, the most positive change I saw in the movie (vs. the comic) is that it’s clearly stated that Red Sonja trained in the use of the sword, so that her skill is not entirely a gift from the gods. There’s an even stronger argument to be made here that there really was no goddess and that the vision was only a hallucination that drove Sonja to train herself.

Curiously, the unnamed goddess in this story only promises Sonja her skill in combat. At no point does she mention the accompanying vow to never love a man, save one who has defeated her in combat. Sonja herself seems to have added this vow, as it’s shown early on that she feels uncomfortable around most men. And it’s Kalidor, of all people, who points out the absurdity of her vow with, “So you will only love a man after he’s tried to kill you?” I prefer the idea of both her skill and her vow being the result of Sonja’s own decisions, reinforced by a vision that was likely nothing more than a hallucination.

What about the tone? The filmmakers take a rather conservative route by depicting Sonja’s rape as a two-second flashback in the goddess’s opening monologue. This retains a key element of the character without actually turning off half the audience with a brutal rape scene before the opening credits. We know what drives Sonja without having to sit through the worst of it. From there, the movie maintains a fairly light tone (think of a sillier, much-less-intelligent version of Xena) on par with what was in Conan the Destroyer.

Of course, there are some rather massive plot failures that prevent this from being a much more enjoyable film. The biggest flaw is the issue with Queen Gedren as a frustrated lesbian who preys on beautiful young women. I can’t imagine a plot hook like this one would even make it to a big-budget film today and it provides a time capsule to how far attitudes have shifted in the intervening twenty-eight years. In addition to having Sonja’s family murdered, Gedren also orders a dozen priestesses be buried alive in a scene made horrifying by the screams of women as the pit they’ve been thrown in is slowly sealed shut. Furthermore, she is constantly accompanied by a handmaiden/apprentice (Lara Naszinsky, in an unnamed role) in a relationship that can most easily be described as abusive.

While it’s clear that Sonja is the main protagonist, Arnold Schwarzenegger gets top billing in the credits and dominates the credit sequence at the beginning. While the producers clearly wanted to highlight the post-Terminator actor’s involvement, it’s just a bit galling to see him take over the credits.

While Red Sonja (and Brigitte Nielsen) is beautiful, it does get a bit old that everyone (male and female) who meets her immediately wants to have sex with her. Honestly, even twelve year-old Prince Tarn is flirting with her. Only his assistant, Falkon, treats her as more than a sex-trophy, which is probably why I found him to be the most interesting character in the film.

Of course, if we were going by casting alone, the film would have been fantastic. Arnold Schwarzenegger, no matter what his character is named, makes a great ancient warrior. He knows the material isn’t too serious and that, script-wise, he’s not supposed to be the main character, and plays his supporting role well. Brigitte Nielsen was only twenty-one when this film was made and while she’s not the most dynamic heroine, she certainly looks appropriately Amazonian. (Depending on which source you believe, Nielsen is either as tall as or several inches taller than Schwarzenegger.) Sandahl Bergman, of course, defined the valkyrie for many viewers when she played Valeria in 1982’s Conan the Barbarian. Here she tries her best to play an evil sorceress, but is clearly more in her element at the end of the film during the sword-fight with Nielsen. As I mentioned before, Paul L. Smith (more accustomed to playing tough guys) is great as the ever-loyal, ever-humble servant Falkon. Ronald Lacey is wasted as Gedren’s second-in-command, Ikol. How good is Lacey at playing second-in-commands? He was Arnold Ernst Toht in Raiders of the Lost Ark (the Nazi whose face melted at the end). It’s just too bad none of them had a better script.

So, overall? Red Sonja isn’t by any means a good movie. But if you can overlook the anti-homosexual plot elements, this could be a nice dumb, fun, get-drunk-with-your-friends-and-watch-it movie. It’s really just a shame that those Mystery Science Theater robots aren’t still working, now when we need them most.

All right, I’ll bite. What the heck is Blue Sonja??

Sonya “Sonja Blue” Scarlett (November 13, 1913 – May 7, 1968) was an American jazz and blues singer.
Her better known recordings included “Don’t You Feel My Steel”, “Look What Erlik’s Got For You”, “Writhe, Hellspawn, Writhe”, and “Sword Slingin’ Rambler”.

She was born in New Orleans, Louisiana, and often sang and performed with her husband, Egil “The Hammer” Ivorson, a regular of the New Orleans music scene.

The recording of “Shadows Pent in Hell” by Scarlett was released by Carcosa Records as catalog number 153. It first reached the Billboard chart on December 18, 1948 and lasted 8 weeks on the chart, peaking at #14.
Scarlett was inducted into the Louisiana Blues Hall of Fame in 1997.