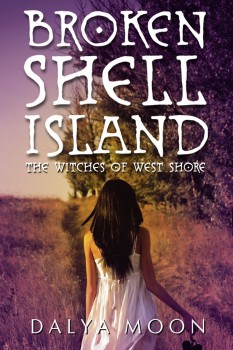 I don’t make much effort to make these reviews spoiler-free, but I think this one may have more spoilers than usual. So be warned.

All Opal Button wanted for her birthday was a bike. Instead, her grandfather gave her his old suitcase and a one-way trip to live with his sister on Broken Shell Island. Opal had always assumed that the island was imaginary, as it was the setting of a series of children’s books written by her grandfather’s friend, Flora Fritz. On what real island could goats talk and could real stairs and doorways be drawn with chalk? It sure seems real enough when she arrives by magic suitcase, though.

She’s not the only one arriving at the island that day. The local taxman’s mail-order bride is also supposed to be coming, thus setting up what promises to be an amusing tale of mistaken identity, at least until the body of the murdered fiancée is found. But Broken Shell Island doesn’t turn into a murder mystery either (although the mystery of who killed Svetlana is an important part of the story).

At heart, Broken Shell Island is a coming of age story for Opal. It even includes a heroic quest. Of course, the original quest–to fetch bluebeeswax to polish her great aunt’s floor–gets sidetracked when her guide, a boy her age named Peter, is blinded by a snakebite. Then they’re thrown even further off course by the appearance of a daemon, a creature of the underworld summoned by the use of dark magic. This leads directly to a visit to the witches of West Shore, who aren’t really happy to see them. The witches aren’t evil (mostly), and some of them were friendly to Opal near the beginning of the book, but they do have some dark secrets, one of which sends Opal back to the beginning to try it all again. No, there’s no time loop, but Opal does end up pretty much retracing her steps, this time sans Peter, but with the help of the sheriff and the taxman, Edwin, until she manages to return to the West Shore and try again. One would think this redo would be annoying, but it actually works out fairly well. First, because the author picks up the pace and gets through the sites much more quickly, and second, because things have changed since the first time Opal visited, and more is revealed with each place revisited.

The mystery of the murdered girl is quickly resolved from there, though Opal has surprisingly little role in its resolution. Instead, she faces something much more frightening: the daemon itself. And this she has to do without the help of Peter, Edwin, or the sheriff.

Throughout the book, Broken Shell Island is a mysterious place, with odd creatures and plants, and magic that works in strange ways. Goats who may or may not talk and chalk doorways and stairs are just the beginning. There are giant owls, purple plants, bees that don’t sting and taste just like blueberries, a rainforest where the trees are the source of rain and the color of the tree tells you the temperature of the water, land squids, diving birds that retrieve berries from the ocean and deliver them to goats, sadistic pixies who do hair, and much more. Every page has something new and marvelous. There’s magic, too, and not just from the witches. Residents can borrow night from the next day for an early fireworks show, or breed a plant that grows tomatoes and peppers. It’s not really clear whether there’s a difference between the magic of the island and the magic of the witches, or if the witches just know more of the island’s secrets than anyone else. Certainly no one but the witches seem to know about the chalk doorways, but Opal learned about them through the adventures of Artie in Flora Fritz’s books, and he certainly wasn’t a witch.

A lot of the little mysteries remain unanswered even at the end. We never learn how Artie, who grew up to be one of Opal’s grandfather’s friends, learned to do the chalk stairs and doorways. Nor is it ever explained why Opal’s grandfather and his friends left the island, or why they weren’t able to return, or why Opal was able to. Or why she had to arrive by magic suitcase. That suitcase is the source of more questions than answers, and I think its role in the events on Broken Shell Island never really makes sense. Opal lost it for a while, and Svetlana apparently found it before she was killed, but it’s never really explained how, or how it found its way back to Opal.

But these are the sorts of things that I worried about only after I had put down the book, and was no longer caught up in Opal’s adventures. Within the context of the story, a bit of mystery and nonsense just fits on an island where the human population claims to be descended from goats. Perhaps a tighter story with a more logical plot would have been enjoyable, but it would have been something quite different from this entertaining coming-of-age story.