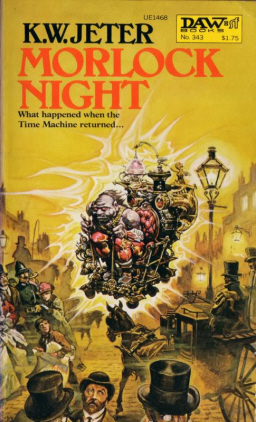 I have vivid memories of watching George Pal’s science fiction thriller The Time Machine — based on the classic novel by H.G. Wells — in a theater, even though it came out in 1960, four years before I was born. Likely I saw it in an auditorium during a Cub Scouts movie night, or something. In any event, I remember the Morlocks. Scary, scary dudes.

In the last ten years there’s been an explosion of sequels to classic fiction. You don’t have to look far to find examples; not with Oz the Great and Powerful playing in theaters, and shelves and shelves of Sherlock Holmes and Jane Austin sequels crowding bookstores.

Typically, however, K.W. Jeter — the man who created the word “Steampunk” — was there first, with the novel Morlock Night in 1979. Morlock Night explores what might have happened if the Time Traveler’s wonderful machine fell into the hands of the Morlocks and they used it to return to Victorian England and turn London into their new hunting ground.

Morlock Night is full of surprises, as the premise becomes the launching point for a fast-paced fantasy involving King Arthur and Merlin, Excalibur, an ancient Atlantean submarine, and the fabric of the Cosmos being torn to the ripping point by the paradoxes of time travel… standard steampunk fare by today’s standards, but that was pretty wild stuff in 1979.

In his now-famous letter to Locus in April 1987, Jeter was the first to use the word “steampunk” to describe this book, and the strange and exciting new sub-genre of retro-adventure fantasy also being written by Tim Powers and James Blaylock:

Personally, I think Victorian fantasies are going to be the next big thing, as long as we can come up with a fitting collective term… like “steampunks,” perhaps…

Morlock Knight was out of print for over three decades, until Angry Robot reprinted it in a handsome new edition in April, 2011. It was originally published in paperback by DAW in June 1979, with a vivid (and very yellow) cover by Josh Kirby, who later became renowned for his Discworld covers (click the image for a bigger version). It is 156 pages, originally priced at $1.75; the new edition is $7.99 ($6.99 for the digital version).

I can think of a few candidates that pre-date it:

The Space Machine by Christopher Priest
Into The Aether by Richard Lupoff
The Warlord of the Air by Michael Moorcock
A Transatlantic Tunnel, Hurrah! by Harry Harrison

The Lupoff, in particular, features literal steam-powered spaceships, and is generally indistinguishable from contemporary steampunk.

Great list! I’m glad you mentioned INTO THE AETHER. I wrote an article on it last September:

But were any of the books on your list called “Steampunk?” Was MORLOCK NIGHT the first novel to be called steampunk?

> But were any of the books on your list called “Steampunk?”

No, as far as I know, Jeter’s letter was the first use of the term. The way I read the letter, though, he’s only claiming priority among himself, Powers, and Blaylock, and he seems to be joking about the name.

Back then there were lots of people riffing on the then-fashionable “cyberpunk” term. War For The Oaks (now considered a founding urban fantasy text) was referred to as “elf punk,” for example. “Cyberprep” was a joke as well. I think the term “steampunk” became much better known when The Difference Engine came out, because here were actual card-carrying, manifesto-signing cyberpunks doing it. So if you want to pick a novel that was the first generally acknowledged recipient of the term, I’d go with that.

> The way I read the letter, though, he’s only claiming priority among himself, Powers,
> and Blaylock, and he seems to be joking about the name.

Yeah, I think you’re absolutely right. That’s all part of the appeal of the genre, though — even the name arose out of a joke made by one of the earliest writers.

Steampunk was always meant to be fun, hip, and irreverent, and the genesis of the name fits nicely with that orthodoxy.

Well I stopped reading steam-punk shortly after the genre became established (ie, the late Eighties) so my knowledge of later contributions is non-existent. For what it’s worth, I reckon Jeter deserves the most credit. Gibson, Blaylock and Powers only contributed one book to what was then an embryonic genre. Gibson’s contribution came comparatively late and there’s very little steampunk in the ‘Anubis Gates’ or ‘Homonculis’ (which is set at a much earlier, pre-steam period in English history) whereas Jeter wrote two books, both establishing the genre’s most popular tropes – ie, clockwork gadgetry.