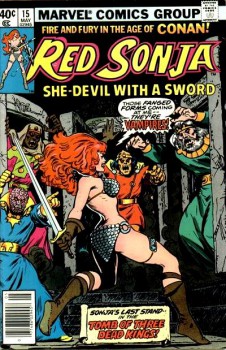 I know I’ve gone on about this before, but cover spoilers can ruin an otherwise great story. Seriously, click the cover to Red Sonja 15 and tell me if you can guess the secret of the three dead kings. Honestly, even the title (The Tomb of Three Dead Kings!) practically gives it away.

So it is a little surprising when we open to page one and find … a mummy. Just some guy wrapped in cloth strips, surrounded by a circle of swords in the snow. Sonja stops at the sight of him and is about to take a closer look when she sees three men dressed like kings (spoiler, they are) riding in the distance. So what’s an adventurer to do? Investigate the mummy or the three kings riding together in the dark?

Sonja opts for neither. Instead, she heads in the opposite direction to a sleepy little town where she finds a warm inn to relax in.

Of course, Red Sonja’s idea of relaxing includes beating everyone at dice until her satchel is full of coins and everyone at the inn is mad at her. She gets invited into the backroom by three of the losers, only to get attacked. Even though she’s expecting it, one of them gets a lucky shot and Sonja’s quickly stripped of her sword and purse, then thrown out in the snow.

Even with her cloak, that bikini isn’t helping much in the snow. And, honestly, why would she still be wearing a bikini in the dead of winter? In fact, a metal bikini would get even colder than a regular cloth one. Even her horse is wearing a blanket.

Fortunately, Red Sonja always keeps an emergency coin in her boot, so she has enough to cover a crappy inn on the other side of town. Before she goes, she manages to steal a sword by holding a passerby at knife-point. Near as I can tell, this is just one of the shlubs she beat at dice a few hours earlier. He’s not one of the guys who attacked her and he didn’t even try to hold out on what he owed. He just happened to be at the wrong place at the wrong time and now Sonja has a new sword.

So, armed with a sword and a gold coin, Red Sonja spends a crummy night in a crummy inn, dreaming of money that turns to worms. In the morning, she sneaks out the window of her rented room and heads back to the inn where she got thrown out.

So there’s a page where the cleaning woman mistakes Sonja for a prostitute before pointing to the backroom where her three assailants are holed up. Honestly, Sonja was just in that room the previous night. It seems odd that anyone would have to point it out to her.

The three men have a young lady with them and they’re trying to impress her with stories of their heroic deeds, like how they robbed a woman the previous night and left her to die in the snow. Because, I guess, bar wenches get turned on hearing about louts abusing some other woman. Anyway, she’s probably still feeling groggy from not getting enough sleep because it takes Red Sonja two whole pages to kill three louts.

After she’s done, three corpses on the floor all around her, Red Sonja wonders if she can get some breakfast. Seriously. Even Han Solo had the good sense to leave the cantina after shooting Greedo.

But breakfast is not in the She-Devil’s future, because she sees the bar wench is still cowering on the floor, terrified of the hideous thing that’s sneaking up. Right. Behind. Her.

It’s a man dressed in a green cloak and robe, bearing a sword. And wearing a mask. And I know what you’re thinking. A masked man with a sword sounds pretty intense. Maybe Sonja is going to fight the Hyborian equivalent of Zorro, mistaking her for a criminal like the ones she just dispatched.

Maybe the wimpy guy she robbed the previous night. He’s put on his mask and cloak and returned to exact justice.

That would have been awesome.

But that’s not who it is.

And it’s not that kind of mask.

This one’s covered in poppies.

Of course. It’s Red Sonja’s book, so she has to fight a swordsman who covers his face with flowers. Except that it’s not even much of a fight since the scent of the poppies quickly overpowers her, causing her to drop her sword.

Which means that poppy-face just defeated Red Sonja. Which means I guess that she has to marry him. Or sleep with him. Or kiss him. Or have a Moonlighting-style will-they/won’t-they relationship. I’ve been reviewing these things for twenty-five posts now and I’m still not authoritatively sure on what’s supposed to happen.

But Sonja’s last words before passing out make it clear: “Keep back! You’ve not defeated me in true battle!” Does this mean he only gets to first base? Who knows? Anyway, he doesn’t really seem to like her in “that way,” instead throwing her over his horse and riding off to his castle.

Of course poppy-face has a castle. Complete with a greenhouse. Because, obviously, where else is he going to grow the poppies for his mask. He leaves Sonja on the floor of his greenhouse and, when she finally wakes up, she meets poppy-face’s father, Lord Fluroelie. It turns out that Fluroelie once served the three dead kings (yeah, we circled round back to them), bringing them victims, until his son betrayed him, convincing the kings that he’d make a better servant. So the kings transformed Fluroelie into a humanoid plant, trapped in his own greenhouse.

Fluroelie’s son knocks Sonja out again and takes her on to the tomb of the three dead kings. Why did he make the pit stop at the greenhouse? Hard to say. Maybe he needed fresh poppies. Maybe he needed to feed his horse. Maybe he was hungry and wanted a snack and his castle is halfway between the inn and the tomb. We never find out.

Poppy-face lays Sonja on the floor of the tomb and calls to the kings, who surprisingly have names (it’s just that a lot of characters in these stories go unnamed and I’ve kind of gotten used to it). Nubis, Kaukasis, Mongollis. Did I mention that the kings were of three different races (groan)? Guess which is which. They even go one further and thank poppy-face, revealing that his name is Sharlo. The three dead kings also reveal the terrible secret of how they are able to continue walking the earth, even though they’re dead.

Well, Red Sonja certainly knows how to deal with this sort of thing.

She stabs Sharlo, steals his poppy-mask, and runs away from the three dead kings. She gets on Sharlo’s horse and rides away. But the vampire kings are right behind her, riding their own horses. Their own vampire horses.

But everything’s going to work out because Sonja has a plan. She’ll just ride back to the greenhouse and ask Fluroelie for help. She figures that he’ll help her defeat the kings in exchange for her helping him resume human form.

Unfortunately, she starts by handing him the poppy mask and telling him that she killed his son. Really, unless you’re absolutely one-hundred percent solidly certain how someone’s going to react to that kind of news, don’t mention murdering someone’s child.

The fight doesn’t last long, as Sonja manages to set him on fire with one of the lit torches in the greenhouse. Is it nitpicky at this stage to point out that no one would keep torches in a greenhouse? The humidity would douse them. Plants would be in danger of catching fire from a stray spark. Not mention the smoke and soot would cover the glass, blocking the sun.

With father and son both dead, the three dead kings arrive in the greenhouse … and promptly fade away. Red Sonja reasons out that they must have been mystically tied to the two mortals and, when they died, the kings passed from this world. There’s absolutely no reason for her to assume such a thing, but it’s the last page of the story and it had to get resolved somehow. We’re promised that coming up next will be The Master of Shadows, but that it won’t be in this title.

Because issue fifteen is the last issue of Red Sonja’s series. It was a bimonthly title that had lost the artist who’d defined the character’s look (Frank Thorne). The extended Suumaro love story probably didn’t help sales either. And, no matter how good the writing, Red Sonja was going to be saddled with the notion that she was just a female Conan (hopefully everyone knows how I feel about that by now). It’s a shame because, as you’ve probably surmised, I thought the series was, overall, pretty fantastic.

Of course, the character lived on in guest appearances, as well as a couple more even shorter-lived series; but this issue did mark the end of an era. Moving forward, the craziness got toned down significantly as writers began approaching the character more seriously. There was a lot of good stuff coming, but the giant clams and poppy-masks, demon charioteers and egg-blowing centaurs were on their way out.

Next Issue: Red Sonja Can’t Even Take a Nap