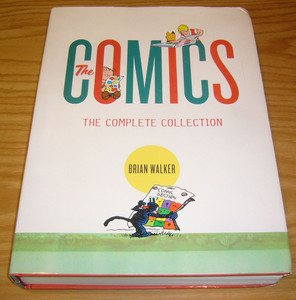 And others. Lots and lots (and lots) of others.

It’s called The Complete Collection because it was originally published in two volumes: The Comics Before 1945 and The Comics Since 1945. These survey volumes were useful in their own right, with comics organized by decade, and well-written biographical profiles, as well as thoughtful analysis of the different genres. But the omnibus collection is both an incredible value and a beautiful piece of work, the kind of gorgeous and massive tome you could place prominently in the living room, flip through for years, and never exhaust. Or use to prop up the foundation of your house, whatever.

Comics: The Complete Collection was published in April 2011 by Abrams ComicArts. It is 672 pages in hardcover, and there is unlikely to be a softcover or digital edition. It’s a bargain at $40, and you can find copies online for around $29. Highly recommended.

If it were actually “complete”, it would be larger than that–it would be a house book, large enough to function as a house if hollowed out. 😉 (And it would cost $1,000,000.)

My brain is already generating sequences of essay assignments for my students. Close reading, followed by compare/contrast, followed by assertions of influence, followed by research papers about historical context or critical reception.

Oh, and the book itself looks delicious, too.

I paid the bargain basement price of $10 for a copy at my local Border’s a few years ago when they were shutting down and I recommend it highly at any price. Even beyond the often gorgeous examples of great comic art, Brian Walker (who’s the son of Mort) does a very good job of delivering the medium’s history in fine, lucid prose. It certainly made a fine addition to my shelf of books devoted to comic art.

If we could indeed purchase a complete collection of American comics for $1,000,000, we’d start a Kickstarter today. But when the first issue of Action Comics sells for over $2 million at auction, that blows the budget right there.

Since the boks weighs about 7 pounds, just passing it around the classroom makes a terrific work-out routine, too!

And I had no idea Brian was the son of Mort Walker! I should have paid more attention.