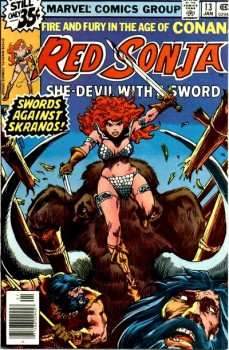 So this is the big wrap up to the storyline that began back in issue 8. Red Sonja sneaks back into Skranos in order to reinstate Suumaro as the rightful heir to the throne. Never mind that, over the last four issues, we’ve seen that Suumaro is a misogynistic momma’s boy who can’t seem to accomplish anything on his own. His half-brother Oryx (the current heir to the throne) is even worse. The first plan is to sneak past a sleeping guard.

The next step is to steal a harem girl’s outfit. More specifically, she pays the harem girl a gold coin to remove her outfit. There’s a great panel of the harem girl covering herself in shock at the thought of removing her clothes, even though, really, that must be part of the job description. So Red Sonja has to hold a dagger to the girl’s throat, urging her to forego her usual modesty and strip off the two-piece translucent outfit. Keep in mind, Sonja’s in the girl’s room, so it’s not like anyone else will even see her before she just puts on another outfit. In fact, why doesn’t Sonja just ask her for a spare outfit, since the harem girls can’t wear the same thing every day (and if they do, um, yuck).

Once again, Red Sonja takes to the streets, dressed in a harem slave outfit that leaves more to the imagination than a chainmail bikini. But she’s in disguise now. Because, apparently, no one was looking at her face the last time she was in Skranos. It’s a pretty stupid plan, but of course it works.

One page later, she walks right up to Oryx and starts flirting with him, face uncovered. Keep in mind, this is the man who ordered her to be hung just a couple weeks earlier. Red Sonja was standing at the gallows, insulting Oryx, before his half-brother swung in and rescued her. I’m just saying, she’s someone he’s going to remember. But with a worse disguise than Clark Kent, she manages to get close to him.

Of course, Sonja manages to screw up this unlikely opportunity royally by telling Oryx that, really, she’d rather see his father the king. This gets him so angry that he calls out Ramin, one of his lieutenants, and gives Sonja to him (because the putrid attitude towards women is apparently an inherited trait).

At this point, Oryx figures out that the red-haired dancing girl is Red Sonja. In a rare moment of sanity, he decides that, rather than make a whole production out of formally executing her, this time he’ll just stab her with his sword before she has a chance to arm herself. But Ramin stops him because stabbing an unarmed woman is morally wrong.

Just kidding. He stops him because Oryx gave the woman to him and he still wants her.

So the two men fight in a dark alley over Red Sonja. Oryx wants to kill her for making him look like a fool in front of his men. Ramin wants to spare her life so he can use her as a sex slave. I’m not really sure if I’m supposed to be rooting for someone in this fight. Not that it looks like it’s going to be much of a fight, since Ramin is also unarmed.

Except that Ramin is a mammoth trainer and is able to call one of the “tuskers” to his aid. And, one panel later, one of them busts through a building to help the albino. Of course, these aren’t the most graceful of beasts, so it accidentally steps on Oryx, crushing him to death instantly. Ramin then goes to help Sonja up, reassuring her that he only tried to force himself on her sexually because Oryx had dared him to do it. I’m a little disgusted to realize Ramin’s argument would actually hold up in some modern courts.

And Sonja’s so used to this crap that she pretty much lets it go with the equivalent of “don’t let it happen again” before putting on her much more revealing chainmail bikini. Ramin then calls more mammoths to the alley and both Ramin and Sonja mount the beasts.

Wait. I’m reading this story and Oryx got flattened at the start of page 7. He’s currently staining the bottom of a mammoth foot. Suumaro is now the heir to the throne. Shouldn’t the story be over?

Apparently, killing the only other heir to the throne isn’t enough. She has to get the king to acknowledge that his only surviving descendent is the rightful heir. So Sonja, Ramin, and a herd of mammoths quietly make their way through the evening streets of Skranos, not seeming to attract much of a crowd at all.

The guards put up no resistance, welcoming the outlaw Red Sonja into the king’s chambers. We find that Quillos is indeed an old man on his death bed. He lets Sonja know that, if it was up to him, he’d gladly name Suumaro as the true heir to the throne, since he was first-born. But first, he must be given the ceremonial crown which will bestow both the rank of king and general of generals. Unfortunately, the crown is cursed so that even Quillos has never been able to wear it, has never even been able to touch it.

So he hands Sonja the crown to give to his son. He hands it to her, meaning that he’s holding it with his bare hand. He’s not even wearing gloves. And absolutely nothing happens with the cursed crown.

But as soon as Sonja touches it, the crown starts whipping her around the king’s bed chamber like a rag doll. You’d think the guards would come in to investigate the sounds of a struggle in the king’s bedroom; but no one appears.

And we get one of the true nightmare moments of the series. I’m actually surprised that the 1979 Comics Code would let this one slide as Red Sonja melts away to a gray skeleton with wide, agony-filled eyes. Even the chain-mail bikini doesn’t make it silly. It’s just a gruesome little illustration as Sonja’s body ages beyond death, while her soul remains within the husk to endure further agonies.

Finally, Quillos can’t take the sight of her suffering any longer and begs Apah Alah to lift the curse and spare Red Sonja. He’ll do anything, even move in with her. It is meant to be touching, I guess, a man so selfless that he would endure the ultimate sacrifice of living with his wife.

Apah Alah appears as a half-snake (the bottom half) and Quillos mentions that she’s still as beautiful as ever. It’s revealed that the marriage didn’t work because Quillos couldn’t bring himself to believe that an immortal could love a mere mortal. Yes, that’s the reason. It has nothing to do with Apah Alah being an evil insane sorceress who occasionally turns into a snake.

So Sonja isn’t the only one in the room who makes bad relationship decisions.

Anyway, Apah Alah agrees to lift the curse from the crown and bring Suumaro back from the nether dimension where he went last issue (even though the whole point of going there was so that his mother couldn’t follow but, whatever, let’s get on with this story).

Red Sonja is restored to full life, the curse is lifted from the crown and Suumaro fades back into the world. Quillos is restored to his youthful appearance as well and leaves with Apah Alah for some other-dimensional honeymoon suite where they can get to know eachother. And that just leaves Red Sonja and King Suumaro. He tells her he loves her. And her response? “That’s … not important, Suumaro. I’d make no man a good wife; it’s not I was born for, it seems. Perhaps, one day, when the wanderlust leaves me … there’ll be time then for a husband … for children … but that time is not now, I fear.”

Suumaro gives a nice send off speech, where he sums up Red Sonja, her life, and her destiny. And it would all be a lot more moving if he wasn’t such a jerk. Sonja gets on her horse and heads off into issue 14.

Next Issue: It’s Actually More Disturbing If There Isn’t A Subtext.

I like how the artist, Frank Throne, later made “Ghita of Alizarr” for Warren publications. Got around the Comics Code garbage and made it as full of sex as of violence and a neater story also.

There were lots of published attacks on him doing it, usually calling him “Uncreative”…

See, the art was better since he did shorter stories so could take longer amounts of time to get every little jewel and cloth fold right. The story was better and did have a strong, sexual woman who wasn’t an icon or a sex puppet. Well she did start out as a prostitute, but at a time (some decadent Antediluvian kingdom) it was acceptable, then through the ‘strange turn of events’ seemingly required to create a hero then bonded with an ancient magic sword. And though yeah a lot more extreme, it more went with the “Times” so to speak that we were supposed to be more accepting of more sex stuff in mass media, comics leaving the “Kids 12-16” only range, etc.

So they attack him as uncreative…when he was in Marvel, they attacked him for being “Sketchy” and his art did suffer for the amount vs time to do it. Oh, yeah, he did a “Woman warrior” for Marvel, now he runs to Warren where he can draw the BOOBIES… Well, one man’s opinion, but I think while he was doing this for Marvel to get a paycheck and get established he was thinking “Durn Comics Code! Durn rambling formulaic plot…”

Anyways, I do like these articles. Sort of a memory trip and I love Frank Throne’s art, even the earlier less developed Marvel stuff. I’ve held back from commenting since the first one or two I made my “Anti-PC” stance well known and didn’t want to ‘troll’ it.

BTW – The recent Savage Sword #5 from Dark Horse has them adapting REH’s “Dark Agnes” which was the template for Red Sonja.