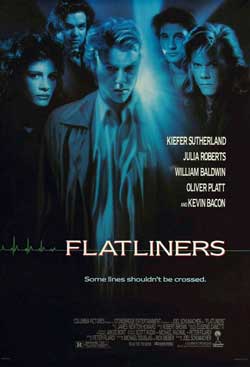 Okay, follow me on this one for a minute…

It’s 1990 and you, along with a small group of your fellow-medical-student friends (the majority of whom are smoking hot by the way) start daring each other to prove the claims made by patients who have had near-death experiences.  You figure the best way to do this is to take turns being brought medically to the brink of death in your underwear, then being shocked and mouth-to-mouthed back into existence by your friends.

If you can now imagine that two of your friends are a pre-24, post Lost Boys Keifer Sutherland and a pre-Eat, Pray, Love, post Pretty Woman Julia Roberts, then this next bit will come as no surprise.

This week reports started springing up all over that the latest film to get laid out on the cinematic operating table and given a Hollywood defibrillation is Joel Schumacher’s 1990 supernatural horror Flatliners.

The original film followed medical students played by Keifer Sutherland, Julia Roberts, William Baldwin, Oliver Platt and Kevin Bacon, all of whom were overly interested in seeing what happens during the afterlife, but whose experimentation dragged a bunch of supernatural baggage into the here-and-now.

On the positive side, this reboot has attracted the talent of Swedish filmmaker Niels Arden Oplev (of the original, sub-titled version of The Girl With the Dragon Tattoo).  Oplev will be working from a script written by Ben Ripley, who is better known for his Source Code screenplay than the latter two Species sequels.

With that talent, a Flatliner remake will likely equal — if not surpass — the 1990 version.  As much as I love the original, it’s more for the abundance of eye-candy than the campy, often painful storyline and dialog.

Up to now Oplev has been busy directing the upcoming pilot for the Stephen King’s Under the Dome adaptation for CBS, as well as his Colin Farrell/Noomi Rapace-starring crime drama Dead Man Down, which opens March 8th. 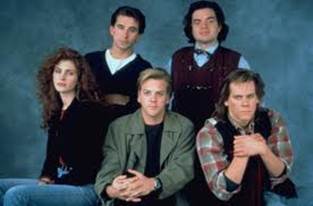 While interviewing Oplev about the upcoming release on Tuesday, Collider.com managed to weasel in a question about Flatliners. Here’s what Opley had to say:

Well, there are negotiations going on about that.  I don’t know who the hell broke that story.  It’s an interesting project and I’m intrigued.  It’s also quite a challenge because the film that’s already been done was a cult classic.  That’s too early to talk about, but it’s definitely exciting.  It’s an exciting option that’s being negotiated.

Clearly casting decisions are still in the future, and ultimately who ends up in the lineup will be a big part of whether or not this is a very good or very bad idea.

Frankly, as we learned from Star Trek, some reboots are worthy successors to their original material. Though I am loath to encourage the lack of originality in Hollywood even a little bit.

Who do you think would be the best fits for Nelson, Rachel, David, Joe and Randy?  Need a refresher?  Watch the original trailer below then post a comment or drop a line to sue@blackgate.com