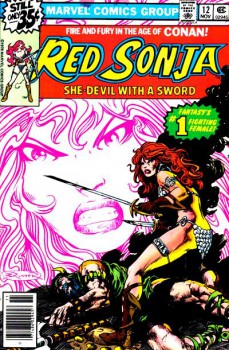 Where were we? Red Sonja and the polygamist exile prince Suumaro were trying to break free of a prison palace, which was built on top of a tree by Suumaro’s sorceress mother Apah Alah shortly after her husband left her. They’d met a horned centaur who used a glass-blowing pipe to create leather eggs that hatched into thumb-sized peacocks that grew to thousands of times their original size in a matter of minutes. The centaur died. The giant peacocks died. Sonja went blind for a while. And after she got her sight back, she was approached by a demon who wanted her to steal something called the Emblem. The demon’s name is Kthonn and he offers both Sonja and Suumaro great wealth if they retrieve this issue’s mystic doodad. That’s page one.

Sonja stabs him on page two. Basically, she knows he’s going to betray her, so why not cut out a lot of useless effort and kill him now? Her logic is sound, but her blade has no effect on the demon. So instead she agrees to find the Emblem. Apparently, among other things, the Emblem has the power to free them all from the prison palace.

Suumaro uses his magic to get a general fix on the talisman’s location. Turns out it’s in yet another tower of the increasingly large prison complex. So the two of them go off in search of the thing and, as soon as they’re out of earshot, Kthonn reveals that (spoiler) he’s planning to sacrifice them as soon as they return with the Emblem. Who’s he going to sacrifice them to? We’re never told. An even bigger demon, probably.

So, Sonja, Suumaro, and Kthonn all know this is a bad deal. But everyone’s going along with it anyway, presumably because seventeen pages aren’t going to fill themselves. And when they reach the (unguarded) chamber where the Emblem is kept, they find four items on a table: a wand, a sword, a coin, and a cup.

Yeah, not only is the story so lazy that it doesn’t bother to give the mystic doodad a proper name, but it presents nothing more original than the minor arcana of a tarot deck for possible magic items. Suumaro warns Sonja that only one of these items is the Emblem. To even touch one of the other three is to bring certain death. How does he suddenly know so much?

I honestly stopped caring a couple pages back. This really doesn’t make any sense any more and I’ll let the plot pass with Sonja just having a hunch that it’s the cup. No clues, no bit of information learned earlier in the story that would point to the cup. It’s just woman’s intuition. Fine.

So, it’s the cup. Suumaro has me in suspense for a second as he reaches for the thing. Will he be killed instantly for choosing poorly? Sadly, no.

But both of them are smart enough to know that, if they return the Emblem to Kthonn, they’ll be killed. So Suumaro uses his magic to activate the Emblem and spirit them away …

Right into a garden of carnivorous plants. This is page seven, folks. Roy Thomas and Clair Noto have taken us from trapped in a castle on a tree to a garden of carnivorous plants. Oh, and it turns out the garden belongs to Apah Alah. She’s going to unleash an army of Audrey IIs on her ex-husband’s fort. That’s her plan. And she couldn’t have grown the plants in the first place without the help of Kthonn, whom she summons to, I don’t know, look the place over.

So why did Kthonn want Sonja and Suumaro to steal the Emblem if he wasn’t really trapped in the castle?

No time to ask questions because now Kthonn is attacking Sonja. Her sword still can’t hurt the demon; but she has an idea. Apparently, not a lot of animals wander through this garden of death, so Apah Alah has set up a nursery system where she spreads buckets of blood around the garden, with little tubes running out of them and feeding each of the plants. (Where did she get the plastic tubes to feed the plants? Hardly the only plot-hole in this story.) So Sonja grabs one of the tubes and sprays human blood on the demon.

The blood doesn’t bother him, of course, but the plants are drawn to it and soon he’s engulfed in the things.

At this point, Apah Alah reveals that she too wants the Emblem (which I guess is the real reason Kthonn wanted it). Its magic is essential in allowing her to release the carnivorous plants onto the world. Suumaro responds by casting a spell that takes him (and the Emblem) to a realm untouched by evil (which is kind of a neat trick and something that would have come in handy a couple times these last few issues). Once the Emblem is gone, the blood in the buckets turns black and the plants die.

Why? I have no idea.

Apah Alah is consumed in an inkblot of power by the unnamed demon that apparently both she and Kthonn served. Leaving Sonja by herself. Before leaving, Suumaro vowed that he would not return until his rulership of Skranos (the fortress run by his father and brother) is restored. So that’s Sonja’s quest for next issue.

My advice to the She-Devil? Skip it. Suumaro is a jerk. Skranos is a mammoth-infested hellhole. She’s got a sword, a horse, and a horizon … just leave this plotline to die its obscure death and go on the quest we all want to see.

The quest to find Frank Thorne. Because John Buscema does a fine job on this issue, no mistaking it. But his version of Red Sonja is just a little too  realistic. Buscema’s Sonja doesn’t have the crazy grin of Thorne’s Sonja. Buscema’s demons and backgrounds are evocative, but they never make you suspect that there’s LSD in the four-color ink, that you’ve slowly been entering an altered state of consciousness. Basically, John Buscema may have earned his place as Conan’s definitive artist; but Red Sonja is still Frank Thorne’s She-Devil.

Come on, Sonja. The Quest for Thorne.