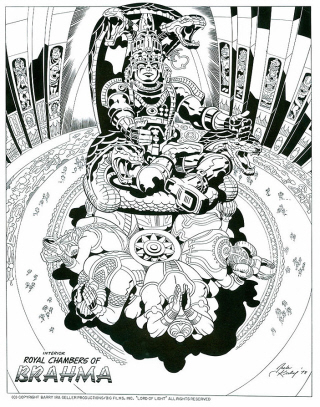 I was pleased to see Ben Affleck’s Argo win the Academy Award for Best Picture last night. It was the best film I saw last year, although I admit I didn’t see all the nominees.

But I was a little annoyed during parts — especially scenes which included dialog from the fake movie, Argo. It’s clear that Affleck (and his characters) have little respect for science fiction, as the script and its source material are portrayed as utterly terrible sci-fi at its pretentious worst.

Which was particuarly annoying because the source material in question — the script used by real-life CIA agent Tony Mendez, the man portrayed by Affleck — is based on my all-time favorite SF novel, Roger Zelazny’s brilliant Lord of Light. The man who wrote the original Wired article that inspired Argo, Joshua Bearman, explains it this way:

Argo was the name Tony gave to a script that was in turnaround and sitting in a pile at [makeup artist John] Chambers’ house. That script was called Lord of Light and had been adapted from a successful Roger Zelazny science-fantasy novel of the same name. A small-time self-starting dreamer… named Barry Geller had optioned Zelazny’s book himself and raised money to get the project started. He hired Jack Kirby to do concept art and Chambers to make the alien masks. But the whole project fell apart…

It was hard to see the script for Lord of Light merciliessly skewered for laughs in Argo. Still, something good has come out of it all. As a result of the recent spotlight on the film, Jack Kirby’s original sketches — thought lost for years — have come to light.

BuzzFeed has reproduced eleven of the sketches in an article by Richard Rushfield. If you’re a Kirby fan, or a fan of Zelazny’s SF masterpiece, they are well worth a look. Check them out here.

A clear reminder that I need to reread both Jack Kirby and Lord of Light sooner rather than later.

Too bad we can’t enjoy both masters via a single project!

I’m just imagining Zelazny doing something with Galactus and maybe the Eternals.

I went into Argo hoping that ‘Lord of Light’ or Zelazny would at least get a passing mention… No such luck!

I got a kick out of the ‘Ar, go f*ck yourselves’ bit, though.

Actually, I just read an article about it over at io9.com: http://io9.com/5951123/argo-is-a-fantastic-movie-about-a-time-when-we-all-thought-science-fiction-could-set-us-free

Anders argues that Affleck and co. made ‘Argo’ into a generic Star Wars-knockoff screenplay to more effectively explore the notion of science fiction in the 1970s as being a sort of salve for the tarnishing myth of American invincibility and exceptionalism. Interesting stuff!

‘Lords of Light’ was one of my favourite SF novels – I had no idea it was the basis for the film the characters are supposedly making in ‘Argo’, which I’m intending to see some time in the near future. Hopefully having the book lampooned won’t detract too much from my enjoyment of the film!

Kirby’s illustration reminds me a bit of the French artist, Philippe Druillet – anyone remember him?

> I’m just imagining Zelazny doing something with Galactus and maybe the Eternals.

Ah! That would have been glorious.

Zelazny did collaborate on a graphic novel adaption of his Amber books, drawn by (I believe) Gray Morrow. It was part of THE ILLUSTRATED ROGER ZELAZNY, released way back in 1978:

> I went into Argo hoping that ‘Lord of Light’ or Zelazny would at least get a passing mention… No such luck!

Truthfully, I think I forgot the connection until about a third of the way into the movie. So I experienced a weird simultaneous epiphany — “Hey! They’re talking about LORD OF LIGHT!” — and dismay — “Oh my God! They’re dissing LORD OF LIGHT!”

I’ve got a book by Druillet boxed up somewhere. Along with Möebius, Bilal and Caza, he was a primary fixture in the early issues of Heavy Metal magazine. If memory serves the man was an incredible colorist and draftsman.

It was nice to be able to peruse all of that Jack Kirby artwork. Sometimes we forget that in addition to being a great storyteller Kirby was also an incredible designer. It’s no wonder Geller wanted him for that movie and it’s too bad that the film tanked before it got any further. A well done, successful movie with eye popping design work by Kirby would have been just the thing to get Kirby out of comics and into an industry that would have provided him with a good salary, health insurance and a retirement plan. Fortunately, he was finally able to accomplish this years later when he entered the animation field to work as designer and concept artist.

> Anders argues that Affleck and co. made ‘Argo’ into a generic Star Wars-knockoff screenplay to more effectively explore the notion
> of science fiction in the 1970s as being a sort of salve for the tarnishing myth of American invincibility and exceptionalism.

That’s a great article. Thanks for the link!

But I admit I disagree with her premise. It sure seemed to me that the movie portrays Mendez and team selecting a terrible, hackneyed script that no one else in Hollywood will touch, with their only criteria that it needs an exotic locale.

Alan Arkin’s great scene where he negotiates to buy the script with an agent really drove that home for me: Arkin essentially states that the script is crap, and everyone in the room knows it. He ends up buying the script for a pittance.

> Kirby’s illustration reminds me a bit of the French artist, Philippe Druillet – anyone remember him?

They do indeed! I owned a copy of Lone Sloane: Delirius even before I read LORD OF LIGHT. Had no idea what to make of it, though!

> Fortunately, he was finally able to accomplish this years later when he entered the animation field to work as designer and concept artist.

You obviously know more about Kirby’s late history than I do. I remember his final NEW GODS work for DC just before he died, but I had no idea he worked in animation. Did any of that amount to anything?

The animation work I’m most aware of is the design work on Thundarr the Barbarian. (Speaking of which: Where’s my non-terrible non-camp live action Thundarr movie anyway, Hollywood?)

John, he started out doing design work and storyboards for what was then a new animated Fantastic Four series. It was the one that replaced the Torch with a robot named HERBIE. He was eventually hired for Thunder which also had Steve Gerber as it’s head writer. Later, Rudy-Spears Animation, which at the time was a big outfit, hired him to design sets, characters, weaponry, spaceships and all kinds of machinery which was what was one of the things he certainly excelled at. One thing is for sure. The animation industry welcomed him with open arms, paid him well and treated him with the utmost respect. Marvel on the other hand decided do the exact opposite and continued to do so for the rest of the King’s life. Sorry, didn’t mean to go on a dietribe but all of that still pisses me off. Hope I answered your question.

> John, he started out doing design work and storyboards for what was then a new animated Fantastic Four series.
> It was the one that replaced the Torch with a robot named HERBIE.

I remember that! It was terrible, as I recall. They couldn’t get the rights to The Human Torch because that character had been optioned for a film that never came to pass, or some such.

There’s a hilarious Barry Windsor Smith comic in MARVEL FANFARE 15 that mocks H.E.R.B.I.E. (and many other things). One of my favorite FF stories ever.

[…] I haven’t re-visted Amber since — although I have re-read Zelazny’s Lord of Light many times, and consider it one of the greatest fantasy novels ever written. (The writers of the movie Argo, however, clearly had a different opinion). […]