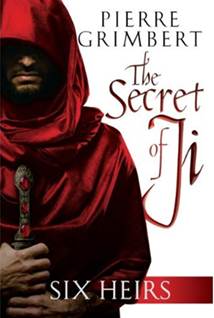 As a devotee of dark subject matters, I still make no apologies for being a Harry Potter fan.

Magic has always been an appealing subject; combined with an enchanted world that exists in parallel with our own, it almost feels like the stories could possibly… maybe… have an element of truth to them.

It’s the idea that somewhere the magic really exists…

But this is precisely why pure fantasy has been on the peripherals of my literary leanings.  Though I have often been ultimately glad to have struggled through a tale that requires a glossary of terms or at least a nearby notebook to keep straight (George R. R. Martin, I’m looking at you), I admittedly don’t care to work that hard for my entertainment.  My willing suspension of disbelief tends to go a little stale if I can’t go with you without packing a guidebook.

However, on February 19th, I and my fellow fantasy philistines may have a reason to rethink our positions.

Pierre Grimbert, a native of France who has won the Prix Ozone for best French language fantasy novel as well as the Prix Julia Verlanger for best science fiction novel, finally earns the right to launch his popular Secret of Ji series in English.

The Secret of Ji: Six Heirs represents book one of the fourteen-installments-tale and sets the stage for the characters and premise of the series.

The Known World is a sprawling region ruled by mortals, protected by gods and plied by magicians and warriors, merchants and beggars, royals and scoundrels.  Here, those with the gift of the Erjak share a psychic bond with animals; a far-reaching fraternity unites criminals of every persuasion in a vast army of villainy; and upon the mighty river Alt, the dead will one day sail seeking vengeance on the enemies of their descendants.

But for all the Known World’s wonders, splendors and terrors, what has endured most powerfully is the strange legacy of Ji.  Emissaries from every nation followed an enigmatic summons into the unknown.  Some never returned; others were never the same.  Each successive generation has guarded the profound truth and held sacred the legendary event.  But now, the very last of them – and the wisdom they possess – are threatened.  The time has come to fight for ultimate enlightenment…or fall to infinite darkness.

Keep in mind, The Secret of Ji is written for young adults. Wondering how a fantasy novel would translate, I tackled the first few chapters in preparation for telling you about it.

First, there is an “Encyclopedia of the Known World” in the back of the book which thankfully turns out to be unnecessary for finding your way around, and instead provides a bit of interesting extra info.

From where I stand in the story so far, Grimbert has competently built mystery and tension amidst the action, adolescent romance and fantasy magic; and his writing style, at least in this translation, is accessible to audiences aged 13 to adult.

So far, Six Heirs isn’t making me try too hard and I admit I’m entertained enough to keep reading.  But I will leave it to the true fantasy enthusiasts of all ages to determine if they would stick with the storyline through 13 more episodes.

Unfortunately, Grimbert’s US publisher, Amazon Crossing, hasn’t gotten around to translating the French “trailer” for Six Heirs, but even so, the music and the graphics give you an idea what you’re in for.

The Secret of Ji; Six Heirs is available in print, ebook and audio formats on Tuesday, February 19th from Amazon.com