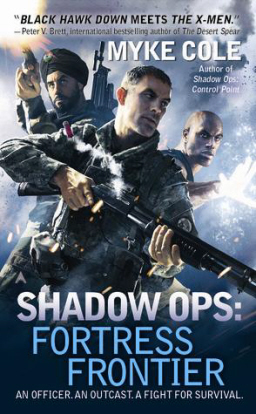 Myke Cole is a class act. Before he launched a career as an internationally celebrated novelist, he did the decent thing: he apprenticed at Black Gate first.

His story “Naktong Flow” appeared in BG 13, and Dave Truesdale at Tangent Online called it “Thoroughly professional… Think Martin Sheen in Apocalypse Now and you’re on the right track.” We attempted to lure him back to our pages with insanely generous offers — his own dressing room, and fresh flowers delivered daily — and even sent the lovely Patty Templeton to interview him, but it was all to no avail. Life as a novelist offered him the one thing Black Gate couldn’t: real money. And respect. And fame. And accolades. And a ton of other stuff, but let’s not dwell on that.

In his essay “Selling Shadow Point,” Myke talks about what it took to submit and sell his first novel, saying “You have to have guts… you have to bite the bullet and take it out to market.” In his case it certainly paid off — his first novel was Shadow Ops: Control Point, which Peter V. Brett called “Black Hawk Down meets the X-Men… military fantasy like you’ve never seen it before.” It was an immediate hit, and the reading public clamored for more. Now Cole has delivered and the second volume of Shadow Ops arrives in book stores this week.

The Great Reawakening did not come quietly. Across the country and in every nation, people began to develop terrifying powers — summoning storms, raising the dead, and setting everything they touch ablaze. Overnight the rules changed… but not for everyone.

Colonel Alan Bookbinder is an army bureaucrat whose worst war wound is a paper-cut. But after he develops magical powers, he is torn from everything he knows and thrown onto the front-lines. Drafted into the Supernatural Operations Corps in a new and dangerous world, Bookbinder finds himself in command of Forward Operating Base Frontier — cut off, surrounded by monsters, and on the brink of being overrun.

Now, he must find the will to lead the people of FOB Frontier out of hell, even if the one hope of salvation lies in teaming up with the man whose own magical powers put the base in such grave danger in the first place — Oscar Britton, public enemy number one…

Shadow Ops: Fortress Frontier was published by Ace Books on January 29, 2013. It is 368 pages and priced at $7.99 for both the paperback and digital versions.