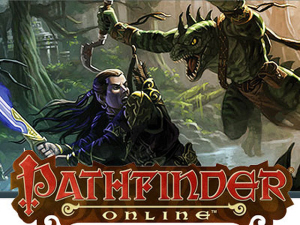 The project had until approximately 7:00 pm Central time to reach its stated goal or receive none of the pledged funding. It passed that goal with some four hours to spare, and ended its campaign with $1,091,194 in total pledges.

Pathfinder Online is a fantasy sandbox MMO developed by Goblinworks, based on the Pathfinder RPG from Paizo Publishing. One of its unique features is the developer’s promise to use democratic “Crowdforging” to prioritize feature development. Some of the other highlights include no classes, a skill system that avoids grinding, player structures, and meaningful trade.

The $1,091,194 haul makes Pathfinder Online one of the 10 largest video game projects in Kickstarter history. The campaign attained one stretch goal (adding Gnomes), but fell short of the $100,000 goal that would have added an additional WizKids Pathfinder Battles pre-painted plastic miniature.

One of the most intriguing perks for supporters was The Emerald Spire superdungeon, a book packed with additional content from a who’s who of modern RPG superstars, including Ed Greenwood, Erik Mona, Frank Mentzer, James L. Sutter, Keith Baker, Jordan Weisman, Mike Stackpole, Wolfgang Baur, Rick Baker, and many others.

they lost me at two points…

the EVE style skill advancement and the “lawful good gets an advantage” BS.

> the “lawful good gets an advantage” BS.

I can’t speak to the EVE style skill advancement, but I find the lawful good advantages kinda appealing. It attracts a certain kind of player, and sometimes you just want to play in that kind of environment.

When you don’t, there are certainly plenty of other games out there.

If you want more information about this game you can head over to feartheboot.com and listen to the interview episodes with Mark Kalmes, an employee of Goblinworks. He also worked on EVE and explains the differences between the two games.

Even more interesting, he talks about the petential of this new MMO and how it’s not trying to be the “world of Warcraft killer”.

> head over to feartheboot.com and listen to the interview episodes with Mark Kalmes, an employee of Goblinworks.
> He also worked on EVE and explains the differences between the two games.