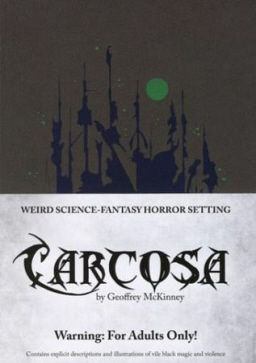 I’ve been enjoying the recent renaissance in retro-D&D gaming. For one thing, it’s brought back great memories of the adrenalin-filled dungeon crawls of my youth, without all the trouble and expense of getting a bunch of middle-aged gamers scattered across two countries back together around a table.

The first role-playing adventures, from Blackmoor to Descent Into the Depths of the Earth, were many and varied, but in large part they followed a similar theme: you crawled into a hole in the ground and killed stuff.

Sure, there were thrills and surprises aplenty — strange subterranean civilizations, weird magic and weirder creatures, and magical treasures of all kinds — but in general the concept wasn’t much different from the piñata. You hit things, and goodies fell out. To get a sense of those early dungeons, imagine wandering through an underground J.C. Penny’s where every cashmere sweater, discount steak knife, and toaster is enchanted and the floor staff have spears and a surly attitude, and you pretty much get the idea.

We thrilled to those early adventures, and at the same time we yearned for something closer to the fantasy novels we were reading. Gradually, the industry responded by producing more sophisticated products with cohesive storylines, real characters, and dungeons that made some kind of functional sense, and the old adventures — with their frog temples, endless magical fountains, and chatty vorpal blades — went the way of the dinosaur.

Of course, no sooner did that happen than we started yearning for the simple games of our youth. Go figure.

That in a nutshell is the story of the resurgence of OE (Original Edition) Dungeons and Dragons games like Astonishing Swordsmen & Sorcerers of Hyperborea, Dungeon Crawl Classics, Labyrinth Lord, and even the recent first edition AD&D reprints. And now that they have arrived — and the marketplace has embraced them — compatible adventure modules have started to pop up as well. I’ve rarely seen any as ambitious and as well thought-out as Geoffrey McKinney’s Carcosa.

What makes it so ambitious? First off, Carcosa is huge: 275 pages in hardcover. That makes it one of the largest RPG products ever published, for any era.

Second, the book details a vast area. Inside the front cover is a handsome hex map detailing 160 miles north-south, and 218 miles east-west, or over 34,000 square miles divided in 400 hexes. A good chunk of the book, 102 pages, is dedicated to hex descriptions.

As each hex is 86 square miles, obviously only the most important features are described. The entries provide two points of interest in each hex, one paragraph for each. These include ruined citadels, space aliens searching for prehuman artifacts, Spawn of Shub-Niggurath, damned isles, campsites led by powder-dealing mummies, Snake-Men catacombs hiding instructions for secret rituals, friendly hunting parties, ancient tombs with patient oozes, and much stranger things. 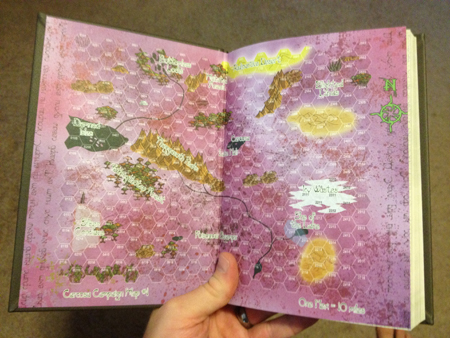 It’s probably unfair to label Carcosa as just an “adventure module.” Yes, it includes a 20-page sample adventure, “Fungoid Gardens of the Bone Sorcerer,” but really it’s much more than that. It’s not just a setting either, although that’s a lot closer.

It’s probably most accurate to view Carcosa as a modern-day version of Gary Gygax’s  Greyhawk or Dave Arneson’s Blackmoor. Like those famous early D&D supplements, it details a complete setting usable with most any of the new OE games, and also extensively expands those systems with additional races, spells, equipment, monsters, damage rules, and special items.

Carcosa is a weird science-fantasy horror setting, meaning that there’s a distinct flavor of H.P. Lovecraft and Clark Ashton Smith to the proceedings, with strange alien races, Great Old Ones, psionics, blasphemous rituals, and much more. If you’ve read a lot of pulp fantasy of the Weird Tales variety, you’ll feel right at home.

Carcosa is a planet 153 light years away from Earth, in the Hyades Cluster. There are no elves, dwarves, or halflings; instead, there are 13 distinct human races: Black Men, Blue Men, Bone Men, Brown Men, etc. I was quite disappointed with the lack of imagination exhibited in the “Races” section, however — other than a single vague sentence (“Jade Men are reputed to be the most adept at sorcery,”) the races are identical in all respects.

Speaking of sorcery, it is the only form of magic on Carcosa. There are no magic-users or clerics, and no magic items to speak of, either. Instead, sorcerers user complex and horrific rituals to summon Cthulhoid entities like the Shambler of the Endless Night and the Slime God. There are 32 pages of these rituals, and in large part they are the source of the For Adults Only! warning plastered on the front cover.

For example, here’s a typical ritual, The Sixteen Forbidden Tortures, used to torment the Squamous Worm of the Pit:

This four-hour ritual requires the Sorcerer to cast out of  copper sixteen various hand-held and assorted devices such as clappers, tongs, a rod, a bell, cymbals, a triangular chime, etc. The [copper] must come from the Thaggasoth Peaks. Additionally, sixteen Dolm female virgins must be slain with intricate and terrible tortures. After each virgin is slain, the Sorcerer sounds one of the copper instruments. This causes the Squamous Worm imprisoned in the Empty Maze to twist violently in pain. At the end of the ritual, the Squamous Worm of the Pit is reduced to 3 hit dice and to servility.

Using rituals to summon and control mega-powered entities is an intriguing (and fairly original) game mechanic. It certainly lends itself to quest-oriented adventuring, as the Game Master can send her players scurrying across the landscape in a desperate search for the right way to conduct a ritual, and indeed many of the hex descriptions detail the locations of long-secret rituals.

But I have to admit that, once again, I was disappointed with the lack of imagination. While the rituals summon or communicate with a huge variety of strange and horrifying entities, they virtually all follow the same pattern: bang on something rare, do something unspeakable to women or slaves, and some fancy winged transportation is yours for a few hours. I think the entire 32-page ritual section could’ve been replaced with two pages of tables.

Second, how attractive is a magic system based on mass sacrifice and torture? I’m sure there are plenty of players who’d have no trouble with it; I’ve just never gamed with any. Sure, it captures the flavor of pulp sword & sorcery well enough, but it doesn’t strike me as something that will fire the imagination of players eager to re-create the adventures of their favorite heroes.

Still, Carcosa has a lot going for it. The interior art is excellent, and the weird science-fantasy aesthetic is truly effective. True, it’s not much use out-of-the-box, but neither were most of those early RPG supplements. It does fire the imagination, and it’s easy to picture the kinds of adventures you and your friends could have on the strange alien landscape of the planet Carcosa, and this book will help make it happen.

I can just see a D&D game where arcane spells are driven by blood sacrifice. “I slit the virgin’s throat, hammer the Adamantine Gong of A Thousand Curses, and cast Magic Missile!”

I think the nasty ceremonial magic works fine as long as the practitioners are NPC villains that the players are trying to defeat.

> I can just see a D&D game where arcane spells are driven by blood sacrifice.

> I think the nasty ceremonial magic works fine as long as the practitioners are NPC villains that the players are trying to defeat.

Yeah, very true. But even then I think there was a certain sameness to most of them. If you’re going to launch an innovative and original magic system, don’t forget the part about being original and innovative.

> Also, the proper length for any Horrible Ritual to Summon the Powers of Outer Darkness is either
> one minute more or less than it takes the players to defeat the NPC/disrupt the ritual

Ha! Ain’t that the truth.

My favorite book of Horrible Rituals, by the way, is the Book of Ebon Bindings:

I’ve seen it around, but have not read it. What makes it so cool?

>I’ve seen it around, but have not read it. What makes it so cool?

That fact that its overflowing with imagination and originality! Its a wonderful source of diabolic summonings.

What RuneQuest said above. It’s written for Tekumel (Empire of the Petal Throne), possibly my favorite fictional world ever (www.tekumel.com) but could be used in just about any other setting with a little work. It doesn’t have any actual rules or mechanics and is written either entirely or almost entirely “in character” by a Tekumelyani scholar collating historical texts.

Thanks! I hadn’t realized it was a Tekumel book — or that it was written by M.A.R. Barker! That alone makes it interesting.

If I’d know about it 10 months ago I would have mentioned it in my Barker obit: