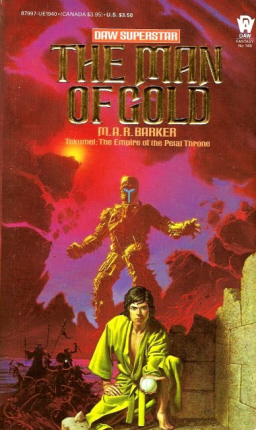 While I was at the games auction at Gary Con on Sunday, Luke Gygax solemnly paid tribute to those industry giants we lost in the last year, including Jim Roslof and Jean Wells, both early and influential TSR employees.

But I was startled when Luke added that M.A.R. Barker, the grand old man of role playing, had died last week at the age of 82.

M.A.R (Muhammad Abd-al-Rahman) Barker is not particularly well remembered today. He wasn’t especially prolific as an author, with five novels to his credit — the last three published by obscure small press publishers. But everyone who paid attention to TSR in the heady early days of role playing knew M.A.R. Barker, the creator of Empire of the Petal Throne and the fantasy world of Tékumel.

Barker created Tékumel in the decades from 1940 to 1970. Wholly unique, Tékumel was a science fantasy setting inspired by Indian, Middle Eastern, Egyptian and Meso-American mythology, a world colonized by humans and alien species some 60,000 years in the future. Perhaps most intriguing, Tékumel was largely free of Tolkien’s influence as it was well established long before the publication of The Lords of the Rings — the only major RPG setting of the 20th Century that could make that claim.

In the early 1970s Barker met one of the original Dungeons & Dragons playtesters, Mike Mornard, and was introduced to the game. It didn’t take long to realize the potential of the D&D ruleset, and he quickly adapted it for his own use and self-published Empire of the Petal Throne in 1974. One of his occasional players was D&D co-creator Dave Arneson, who called Barker his favorite Game Master — and EPT his favorite RPG.

TSR published a revised version of Empire of the Petal Throne in 1975, bringing it to the attention of tens of thousands of young role players eager for anything new. Barker was a professor of Urdu studies, which instantly made him cool (even if we weren’t exactly sure where Urdu was).

But with its baroque and dense setting and unfamiliar trappings, EPT largely mystified its early audience, and the game went nowhere. Far more copies were purchased than played, and just about every copy I’ve ever seen of this rare game is in mint, unplayed condition. 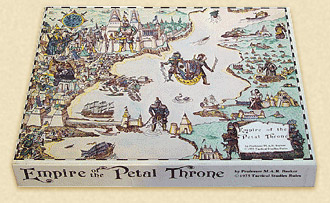 The game — and especially its setting — struck a chord with older, more sophisticated gamers however, and over the decades no less than four major role playing releases used Tékumel as a setting, including a later reprint of Empire of the Petal Throne (Different Worlds Publications, 1987), Swords & Glory (Gamescience, 1983/84), Gardasiyal: Adventures in Tekumel (Theater of the Mind Enterprises, 1994), and Tekumel: Empire of the Petal Throne (Guardians of Order, 2005). All of them are interesting, but Gardasiyal and its supplements — including a lavish collection of sophisticated solitaire adventures — are excellent, and highly prized collectibles today.

Barker’s first two novels, Man of Gold (1984) and Flamesong (1985), were published in paperback by DAW, and are still read and collected today. By the mere act of disassociating RPGs from the worlds of Tolkien and the sword-and-sorcery legacy of Robert E. Howard, Barker demonstrated the rich potential of role playing to an entire generation of gamers. He was an enormously creative man, and he will be missed.

There was also a healthy admixture of pulp & classic adventure fiction — Barsoom leaps to mind — in the mix.

I’d urge everyone to at least track down copies of Man of Gold and Flamesong — they’re both fine novels with a setting unlike anything you’ve ever seen before.

Thanks Joe. It would make me very happy if this generation of fantasy readers rediscovered M.A.R. Barker.

I’m really hoping the Tekumel Foundation can make the novels available electronically (after they finish cataloging his voluminous papers, I expect), at which point I’ll be promoting the living hell out of them.

I have Man of Gold, but I still need to track down a copy of Flamesong. I have always found Barker’s world intriguing. Like the Glorantha setting for Runequest, it’s a rich world that has a feel very different from that of your average D&D campaign.

As for “non-Tolkien influenced” settings…I’d add Dark Sun to the mix. It is very Barsoomian in feel, but with some nice twists of its own.

Wasn’t aware of EPT tie-in novels – will have to track them down.

It was a quite wonderful, strange, creation, and yes, so unlike the other influences on early RPGs (as well as Tolkein and Howard, I remember there being a fair amount of Moorcock in the mix, since Elric, Corum and Hawkmoon were all in print around the mid-70s – and preciouos little other fnantasy existed). When I first encountered D&D (1975) there were a few people playing EPT. Sadly I never actually got into their group, I just read the game but never played.

Oh, and Urdu isn’t a where; it’s a what. One of the main languages of the Pakistan/north-west India area.

I admit I don’t know much about the Tekumel Foundation, but I did find this reference on Wikipedia when I was fact-checking for this article:

– “In 2008, Barker founded the Tékumel Foundation along with many of his long-time
– players, to preserve and manage rights relating to his creations in future.”

Sounds reassuring to me. As to his novels, his last three are still in print and available via Amazon. They were all published by Zottola Publishing, the last one in 2003.

Yes, Dark Sun is a highly original setting and relatively free of Tolkien influence, at least on the surface. There are other fine settings that can claim the same.

But I’m unaware of ANY other RPG settings (except perhaps Leiber’s Lankhmar) that were truly created before Lord of the Rings was published.

Lankhmar (and the world of Nehwon) was created in 1937 by Leiber and his friend Harry Otto Fischer for a wargame, so it may be the only comparable example. Possibly Glorantha, but I doubt it.

> Oh, and Urdu isn’t a where; it’s a what. One of the main languages of the Pakistan/north-west India area.

When I first heard the name I assumed it was Mesopotamian. For years I thought there was an ancient city named Urdu, all thanks to M.A.R. Barker.

If I ever found a city, I will call it Urdu.

I lurk on the Tekumel mailing list so I’ve been following the Foundation news with interest — apparently there’s an incomplete sixth novel in there amongst other things. I also have the three ZotPub novels and while I did enjoy them, I think the first two were the strongest and also work as standalone works of fiction; the later novels were more tied together and were also assuming a pretty high baseline of knowledge about the world.

“But I’m unaware of ANY other RPG settings (except perhaps Leiber’s Lankhmar) that were truly created before Lord of the Rings was published.”

Ah…I see where you are going here. Just a perfectly true statement. I have zero counter examples. Except for the campaign that gets published in 1968 after I travel back in time…

I’m a huge fan of Tekumel – it’s had an enormous influence on me as a gamer and writer – and have played a fair bit of it, too, although like many Tekumel fans, I’ve certainly *read* more about it than played it as a setting. It’s a very different feel from “conventional” RPG fantasy – much more pulpy, and sometimes very alien, without the standard fantasy tropes (inns, taverns, knights, horses, dragons, etc) which RPGers love to hang on to. In some ways it’s sci-fi – I think the Barsoom comparison is apt.

The fiction is pulpy, but good, especially the first two novels, which I’d recommend. But the source material – the thousands of words of history, culture, religions, geography, and the wonderful languages Prof Barker invented, are all worth a look to anyone passionate about world-building.

Thanks, Sarah. That’s a wonderful description of Barker’s strengths as a writer, and why I found him so fascination (even though I wouldn’t recommend him to everyone.)

And I still love that cover for Man of Gold despite the fact that Harsan appears to be wearing a yellow silk bathrobe.

[…] you’re interested in M.A.R. Barker and his fantasy world of Tékumel, that […]

[…] last covered the world of Tékumel with M.A.R. Barker’s obituary in […]

[…] to rival Middle-earth in terms of depth and creativity: Greg Stafford’s Glorantha and M.A.R. Barker‘s Tékumel. Of the two, I suspect Glorantha is the better known, at least in the roleplaying […]