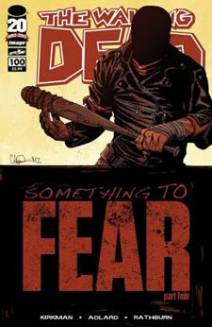 Let’s hear it for the home team…

In their continuing bid to rule all media, zombies in the form of The Walking Dead #100 had the best selling comic in North America for 2012.

The biggest success story of the past decade, TWD revitalized the horror genre in comics and spawned a television series that has broken basic-cable records. Back in 2003, creator Robert Kirkman set out to write a book that would show what happens after a zombie movie ends, following a group of survivors as they navigate a treacherous new world and discover that evil doesn’t exist in the dead, but the living.

TWD #100, issued on July 11, 2012 by Image Comics, led the annual list of top-selling comics compiled by Diamond Comic Distributors.  In this installment, Kirkman shocked longtime readers by graphically killing off a key character, ultimately causing the book to sell out and go through three printings due to demand.

Here is the entire top 10 list, outnumbered but not ultimately ruled by Avengers vs. X-Men.

[Spoiler alert after the jump].

And in perhaps what is the ultimate show of good-sportsmanship, gracious winner Robert Kirkman named his son Peter Parker Kirkman after Spider-Man’s civilian identity who died in Spider-Man #700.

Are you a fan of The Walking Dead comic or TV show?  What was your favorite comic of 2012?  Post a comment or drop a line to sue@blackgate.com.

I shouldn’t be surprised given all of the variants The Walking Dead #100 had. Personally, not a fan of the comic book series. And I’m starting to lose patience with the television series.
The best comic book series from 2012? Hands down has to Earth 2 by James Robinson. Strong runners up are Wonder Woman and Batman.

Whenever anyone publishes a “top whatever” list, they’re just asking for it…

Frankly I’m actually more surprised that the list was so homogenous considering excellent material out there. And who died and left Diamond Comics in charge anyway?

I don’t think there’s much subjectivity in a “most units sold” list, which is what this is. And since Diamond is just about the only distributor left in North America, it reflects all sales. Artistic quality doesn’t really come into it.

My favorite comic book of the year was Kelly Sue DeConnick’s Captain Marvel.

Sadly, a list based on subjectivity will ultimately cause people to overlook works that didn’t make the list. A tragic situation usually punctuated this time of year with the Oscar nominations.