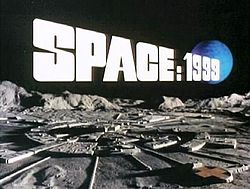 Most of Anderson’s TV shows were co-produced with his wife, Sylvia Anderson. They were married from 1960 to 1981. Sylvia frequently directed the overdub sessions for the supermarionation programs, and even provided the voices of many characters, including Lady Penelope of the Thunderbirds.

Thunderbirds may have been his biggest success — and the defining kid’s show for an entire generation of science fiction fans — but there was nothing that could get my young heart rate up like the opening credits for Joe 90.

Gerry’s television career culminated in Space: 1999, the groundbreaking science-fiction television series that was the last Gerry and Sylvia Anderson co-production, and the most expensive series produced for British television up to that time. It ran for two seasons, from 1975 to 1977, and starred Martin Landau, the painfully wooden Barbara Bain, Barry Morse, and (in season two) Catherine Schell as Maya, the shape-changing alien hottie.

While it had an original premise and showcased enough intriguing plotlines to captivate its teenage fans, Space: 1999 is primarily remembered today for the superb results of effects artist Brian Johnson, whose detailed model work was hugely influential on Alien and other films that decade. His work was so impressive that George Lucas visited Johnson during production and offered him the role of effects supervisor for Star Wars. He later received an Academy Award for his work on The Empire Strikes Back.

Gerry Anderson continued to work well into the last decade; his New Captain Scarlet premiered in the UK in February 2005, and was said to be the most expensive children’s programme ever made in the UK. He died peacefully in his sleep on December 26, 2012 at the age of 83.

While I liked it when it was on, and I was 10-12 years old, I remember reading a scathing review of Space: 1999 in one of the SF magazines, probably The Magazine of Fantasy and Science Fiction.

Even though I don’t think he was doing reviews back then, in my memory the review seems to have been written by Lucius Shepard, probably because he writes so many scathing reviews these days (often well deserved). 😉

Ha! I read at least one of the same reviews — by long-time F&SF critic Algis Budrys, if I remember correctly. He had a notorious dislike of Space 1999 that I never understood as a young fan.

Of course, now that I’ve tried to watch the show as an adult, I can relate. I haven’t seen more than a few episodes, but it doesn’t seem to have survived the test of time nearly as well as the show it’s most open compared to, STAR TREK.

I still love the Eagles and the other design, but man, worst abuse of physics EVER in an ostensibly SF show.

I do remember one episode from my childhood that scared the bejeebers out of me — some “Graveyard of Lost Ships” thing with a door full of scary tentacles. I tracked that episode down a couple years ago and rewatched it and it held up better than I was expecting; can’t say the same for the rest of the show, unfortunately.

Hey Joe, that one really stood out for me as well, and creeped me out when I was a kid.

But, yeah, the science behind the show, and the moon traveling system to system… when I tried rewatching a few of them I found it really hard going. Worse even than third season original Star Trek, which is probably more painful after seeing the best of the 2nd and 1st season.

I remember digging the Eagles, and, really, the whole design look of the show, but never being able to get into the characters, except for Alan, the Eagle pilot.

> I still love the Eagles and the other design, but man, worst abuse of physics EVER in an ostensibly SF show.

I also loved the music. Just watching the opening credits still gets my inner 12-year-old excited.

But yeah… the physics sucked. The show wasn’t great at chemistry or biology either.

> I do remember one episode from my childhood that scared the bejeebers out of me —
> some “Graveyard of Lost Ships” thing with a door full of scary tentacles.

Excuse me? That doesn’t ring a bell, but it sounds worth looking for. Time to break out those SPACE 1999 DVDs my wife bought me…

The episode was called “Dragon’s Domain”, I believe.