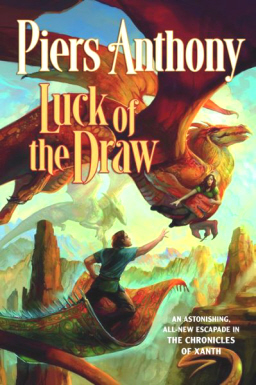 I admit that I was surprised to find a new Xanth novel among this week’s new arrivals — but I suppose I shouldn’t have been. This is the 36th in the series, following 2011’s Well-Tempered Clavicle, and Anthony shows no sign of slowing down; the next two, Esrever Doom and Board Stiff, have already been announced.

The Xanth series, for those of you completely unfamiliar with American fantasy, began with A Spell for Chameleon, published in paperback by Del Rey in 1977. I was in high school in 1977, and I remember the immediate impact it had. It was fast-paced and genuinely funny, and that made it virtually unique on book store shelves groaning under the weight of numerous Tolkien rip-offs

The first nine Xanth books were published in paperback by Del Rey; starting with Vale of the Vole in 1987, the series switched to Avon Books. Anthony switched publishers again in 1993 for Demons Don’t Dream, the sixteenth installment. It’s pretty unusual for a successful author to hop publishers like that; I found this cryptic explanation on Anthony’s Wikipedia page (with no citation):

On multiple occasions Anthony has moved from one publisher to another (taking a profitable hit series with him), when he says he felt the editors were unduly tampering with his work. He has sued publishers for accounting malfeasance and won judgments in his favor.

Yikes. That doesn’t sound good. Not sure what the true story is, but have no fear. Team Black Gate will investigate.

But not until we finish reading Luck of the Draw, of course. And maybe get a snack.

I’ve never read a Xanth book, largely, because of the titles. “Centaur Aisle” makes me groan every time I see it.

I did read the Incarnations of Immortality series though. I also made the mistake of reading the first three Mode books, and waiting for the last book before reading anything else by him.

36? Yeesh! I remember the first seven fondly but have no inclination to go further or revisit them. But I did always look at the DK Sweet cover fondly.

> I’ve never read a Xanth book, largely, because of the titles. “Centaur Aisle” makes me groan every time I see it.

Yeah, I never understood his fascination with groaner puns. They seemed to advertise that the books were crafted with C-grade humor.

Still, it’s one of the most successful fantasy series in history, so the titles must have worked for some. 🙂

> But I did always look at the DK Sweet cover fondly.

Honestly, the DK Sweet covers became so tied to the series for me that I came to automatically associate light, Xanth-style fantasy with every cover Sweet did. Sweet was a tremendously popular artist, but his covers stopped drawing my eye after a while.