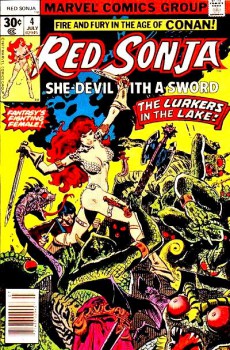 Last issue, Red Sonja competed in the Games of Gita, won, then killed the Queen of Athos. This issue, she’s still hanging around the city. Apparently, the queen wasn’t that popular. So her new friend, Mikal, is showing her the sights, which include a dark lake infested with shambling actors. “(T)hese strange beings, whose limbs are an eldritch mixture of beast and fowl and lowly reptile.” They slowly make their way to the aptly named “Theatre of Monsters.”

Walking into the Theatre, Sonja finds that the performances consist of monsters, who are clearly monsters wearing human masks, performing surreal renditions of standard plays. Of course, the actors behave with more dignity than the howling human audience around them. At one point, they invite Red Sonja to join their performance in exchange for a purse of gold.

Since Sonja is perpetually broke, she accepts the offer and takes the stage. But since it’s pretty much her fate to be perpetually broke, the offer of gold was a ruse and the monster performers try to kill her immediately. Several monster-corpses later, their leader is begging for mercy and offering to explain what just happened.

At this point, Mikal joins Sonja, having apparently been using the bathroom while she was fighting for her life on stage. The two of them are escorted to the lake, where the waters are parted Moses-style so that they can follow the monsters down to their underwater crystal city. There, she is told the story of how the monsters are descended from aliens whose ship crashed in the lake. After adopting water-breathing forms, they began to interbreed with various Earth animals (um, yuck) until the succeeding generations were the monsters that now occupy the city. Apparently, their leader was captured by the people of Athos and they are forced to perform as circus entertainers in order to ensure that he stays alive.

The people of Athos seem to have a real problem with enslaving other people. Of course, in this case, the cross-bred monster-aliens sometimes let their animal natures overwhelm them, which is why a few of them attacked Red Sonja earlier. And, in fact, no sooner has Cyphax (kind of a deputy leader) told the story, then a new batch of monsters go crazy and try to kill Sonja and Mikal. She’s given a magic ring that can open the bridge that leads back to the surface, right before the only decent monster in monster city dies. She leaves them all behind, vowing to no one in particular that she’ll find the tower where their leader is being kept. It’s implied that, once the original (unnamed) leader is restored to power, he can help the monsters regain their senses, although it’s never explained how he’ll accomplish such a thing. Mikal agrees to tag along, even though after two issues, he’s done exactly nothing to help her.

It’s not like I dip into these stories expecting anything terribly complex, but occasionally there are issues (like issue two and, to a lesser extent, this one) where a bunch of things just happen and the plot is so much hand-waving meant to distract readers from the fact that there’s not a lot of reason for the main character to go from point A to point B. It’s something I see in fantasy fiction (and specifically, the sword and sorcery subgenre) from time to time. The hero fights a whatever (giant snake, giant spider, giant bat) and that’s the point. The reason for the fight is often obscure, to the point where the hero can seem like a monster-chopping machine, a thing that merely needs to be pointed in the right direction.

It seems as if whenever Sonja isn’t working to make money or help her friends, she kind of just meanders from one fight to another. There’s really no reason given for her to care about the monsters who live in the lake. In fact, there are some very good reasons for her to avoid them (they keep trying to kill her). And I think part of the problem is that, for all the great things Roy Thomas did writing Conan the Barbarian (and he absolutely deserves his reputation as one of the great adaptationists of Robert E. Howard’s creation), he is still heavily influenced by all of the superhero titles he’s written over the years. Red Sonja is increasingly portrayed as a sort of sword-and-sorcery superheroine, which only works when something about a situation evokes her sympathy. For instance, it would be easy to imagine her relating to an abused woman or an orphaned child and thus helping them. But just feeling sorry for a city full of hybrid alien monsters after they tried to kill her… hey, things are tough all over in Hyboria.

I’ve never been a fan of writers who repeat the character’s origin in every story; but I think it can be a good idea for the writer to do so once in a while, if only to remind himself of what motivates the character.

Next Week: Whoa, Red Sonja hasn’t fought a dragon yet?