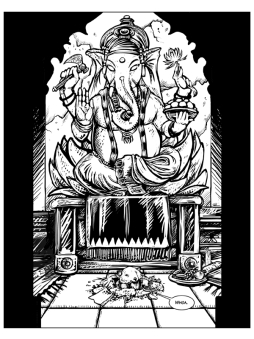 The Hugo Award for Best Graphic Story was first given out in 2009. The category was a nice idea, especially given the increased prominence of comics in the media landscape, but I have to admit that up to this year, I’ve been underwhelmed by the choice of winners. Or, more precisely, winner, singular: Phil and Kaja Foglio’s webcomic Girl Genius took the award three times straight. I don’t dislike the comic, but from what I’ve read, I’d be hard-pressed to identify anything in it that makes it worth a major award ahead of any number of series — Hellboy or Mouse Guard or Wednesday Comics or RASL or All-Star Superman or you name it. After their third win, though, the Foglios announced they would decline to accept a nomination for the next year, in the interest of helping to establish the validity of the award. So the 2012 Hugo went to another title: Digger, a webcomic by Ursula Vernon. I find it’s much more interesting.

Digger is a 759-page fantasy story (free online, or available in six printed volumes) about a talking tough-as-nails wombat named Digger-of-Unnecessarily-Convoluted-Tunnels, who gets lost and finds herself in a strange land filled with gods, humanoid hyenas, magic, oracular snails, and mysteries. Digger wants to get home, but it looks like some unknown force has manipulated events to bring her to the temple of Ganesh where she surfaces. Who and why? That’s the central mystery that unfolds through the tale. Digger makes friends, makes enemies, and takes several harrowing journeys before all is settled.

It’s a comedy, and an effective one, but with a number of serious themes running through it. Vernon seems to have something to say, and the talent to say it well. Her storytelling’s strong, and she handles mythology deftly — both the mythology of various cultures of our world and the mythology of the story she’s creating. 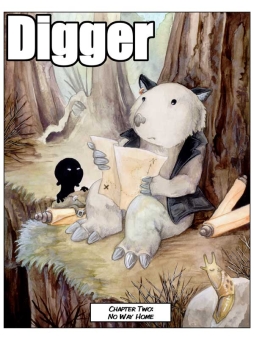 As a number of people have noted, it’s reminiscent of Jeff Smith’s Bone (cartoon character stumbles into mysterious valley with human inhabitants, has adventures mixing comedy and epic fantasy) and to an extent Dave Sim’s Cerebus. Digger’s visually reminiscent of Cerebus, and is referred to as “Earth-rat” much as Cerebus was an “earth-pig born.” The storytelling — specifically the sense of comedic timing — and tone is very similar to the early issues of Cerebus as well; a grumpy and surprisingly tough little anthropomorphic vest-wearing animal has to put up with crazy humans and their schemes while trying to make their way in the world. You could say it all goes back to Steve Gerber’s Howard the Duck, the original anthropomorphic animal struggling with humans in a crazy, implausible world.

But Terry Pratchett’s also been cited as an influence on Digger, and you can see that in the dialogue. It’s constantly sharp, and isn’t afraid to occasionally gleefully go for a gag over plausibility. Like Pratchett, there’s an underlying belief in common sense and rationality; and it’s not surprising when a critical and tense situation is solved by an older character talking sense into a younger. I will say that, as I found to be the case with Pratchett, there were points where one thinks “yes, but … isn’t that a bit convenient?” and wonders what would have happened if characters had been a bit more intractable, and whether the drama would have been more interesting and more convincing. Still, what’s there works, and Digger in particular comes across as a convincing character, strong enough to carry a webcomic epic. 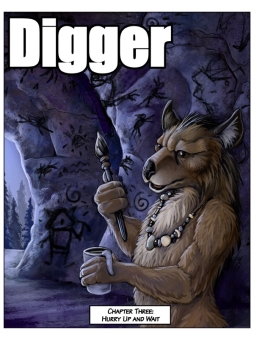 Visually, it’s striking, if occasionally rough around the edges. Vernon uses a style filled with thick lines and powerful blacks given more definition by sketch-like scribbles; it’s reminiscent of woodcut illustration, made even more organic by the thinner scratchy lines. Her designs, both of people and places, are strong and engaging, full of character and atmosphere. Personality, and when appropriate humour, comes through strongly. It has to be said that sometimes, particularly in the early days of the strip, the rendering is sometimes off — in a couple of panels, for example, the woodcut lines don’t vary in weight enough to make clear what you’re looking at without some thought. But then at other times the abstraction of Vernon’s approach and power of her design sense carries the story through.

Her storytelling’s strong, leading the eye nicely through page after page, with highly imaginative angles. I found her approach to page composition much more reminiscent of traditional North American comics than of manga, and overall this choice worked — Vernon can get several panels onto a page almost effortlessly, showing the flexibility of her chosen graphic approach. Add to that a strong sense of atmosphere and a strong sense of negative space; there’s plenty of understated craft in the comic, something that keeps it seeming visually fresh and inventive over the course of its hundreds of pages. 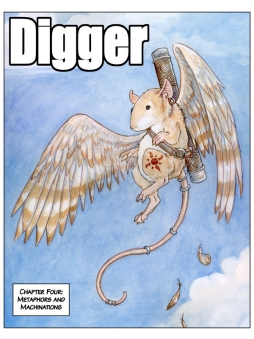 The actual narrative is an engaging mix of tones. Like Bone, there’s humour and the epic, but also like Bone, there’s a smaller-scale and more personal story, or set of stories, as well. Digger, her friend Ed (an exiled hyena-person), a mysterious ‘shadowchild’ that looks like a drop of ink, an occasionally-insane monk named Murai, all have their own backgrounds and tales and enigmas, and all develop in their own ways. The overall arc unites them, but doesn’t bind them.

At times, though, there’s an inconsequential feel to the story. It seems to undermine itself as it goes on. Sure, it’s a story of gods and magical threats, but it makes clear the world is full of gods — there are always more threats, and this is just one in a series. More to the point, the tension of the story’s diminished by a lack of real fearsomeness. Whenever something that looks like a threat comes along, it turns out to be easily defeated, as when what appear to be frightening monsters are taken out by a pack of vampire squash. It’s a funny sequence, but it makes it impossible to take the villains in question seriously afterward. The threats in the story never really remain threats. 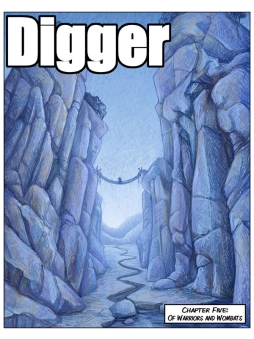 Still, the story does maintain a convincingly creepy atmosphere. Scary things in the darkness under the earth muttering about the left-hand names of gods may turn out to be cute and slightly pathetic, but their fixation on removing Digger’s skin remains unsettling. One of Digger’s friends turns out to have a background involving domestic abuse and murder; that ends up reflecting the core myth underlying the story in a disturbing way. Vernon knows how to underplay things to pull off some strong effects.

Notably, there’s a considerable amount of anthropological and biological erudition implied in the story. Myths from various sources — Hindu, Norse, the indigenous people of Brazil — turn up either on-panel or in an offhand reference. It creates a strong sense of a world where divine manifestations are common; a world caught between the mythic and the rational. Similarly, the creatures that fill it, the talking wombats and hyena-people and magical snails and flying rats and on and on, feel like animals and not human beings in animal skins. They have their own biology, their own ways of seeing the world. These things work together to create the sense of a world that’s both alien, because inhuman, and yet also familiar, because it’s still based in a reality that we know (the animals) or intuit (the gods). It’s a world ripe for exploration, and for the creative improvisation of a storyteller. 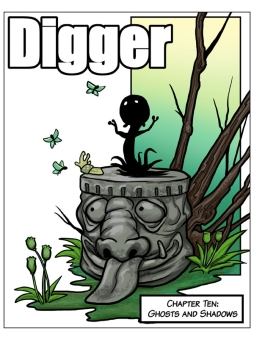 In fact, if the story works despite a surprising lack of tension, that’s probably why. The sense of drama is replaced by the sense of exploration, of increasing understanding. The ostensible mystery becomes almost beside the point; the individual moment-to-moment jams that arise as Digger wanders around are more interesting. The story can be slow, in terms of the movement of what conventionally ought to be the main plot, but the truth is the focus is elsewhere. And by the end, it all comes together. In an absolute sense the ending feels off, as Digger sets out with a character who ought to strongly resent her, but in fact it implies more of the same exploration that led Digger through the strange saga of gods and mammals. Maybe we’ll get a sequel out of it, maybe not. Digger’s a nice story on its own, calm, assured, and enjoyable.