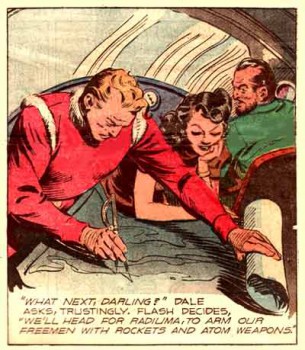 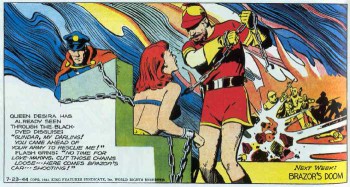 “Queen Tigra of Forestia” was the seventh installment of Austin Briggs’s daily Flash Gordon comic strip serial for King Features Syndicate. Originally published between July 13 and November 26, 1942, “Queen Tigra of Forestia” gets underway with Flash and Dale leaving Zarkov behind in the radium mines of Electra to pay a visit to Mongo’s capitol, where President Barin welcomes his old friends. Barin is troubled that the last three diplomatic missions to the kingdom of Forestia have failed, with the party disappearing each time, never to be heard from again. Flash and Dale immediately volunteer to investigate.

Flash and Dale’s rocketship speeds along the Great River of Forestia until it encounters a hydra. Dispatching the dragon with ease, they discover the abandoned rocketships of Barin’s three missing ambassadors. After searching the ships for clues, Flash and Dale are cornered by a giant millipede. They are rescued in the nick of time by a mysterious feline girl who has been watching them from the trees. Flash sends Dale back to their ship for safety and then sets out in pursuit of their rescuer. The feral girl leads Flash on a chase through the forest until he falls prey to an arborial version of a Venus fly-trap. The feral girl reveals herself as Queen Tigra and offers to free Flash if he agrees to be her slave. Flash refuses and fights his way free, but is left dazed from his efforts.

Impressed with his stamina, the Queen bends over his recumbent form and kisses him. Flash responds passionately and the enraged Queen vows to have him executed for his audacity. Just then she is attacked by the Venus fly-trap, giving Flash the opportunity to rescue her. The Queen invites him to her kingdom, but first orders him to kill prey for her to eat. Flash kills a wild boar and orders the Queen to cook them both dinner. A series of tiresome escapades follow with two brushes with quicksand, a fall into the river for the non-swimming queen, and encounters with a sauropod and a giant spider. Flash comes to Tigra’s rescue repeatedly with the two continuing to clash and make out with Flash reminding Tigra that a queen is still a woman with all the arrogance he can muster. There is no thought to how Dale would respond if she were to see Flash forcing another woman to kiss him against her will. 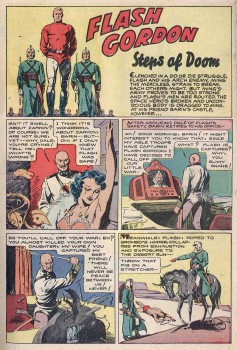 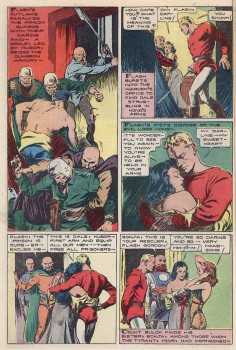 While Tigra is both attracted and repelled by his personality, Flash continually threatens to spank her to break her of being spoiled. The rampant sexism is troubling enough from a contemporary viewpoint, but there is also the fact that Austin Briggs seems unaware that Barin heralds from Arboria and does nothing to explain to the reader how the two seemingly identical forest kingdoms of Forestia and Arboria differ from one another. Tigra quickly grows jealous of Flash’s relationship with Dale. First, she conspires to destroy Flash’s radio transmitter and, once Dale flies their rocketship over Forestia to locate Flash, the Queen shoots her down, claiming Forestia is a no-fly zone.

Finally arriving at the capitol, Flash and Dale meet Tigra’s consort, Prince Cugar. The catty remarks between the two women are nothing compared to the jealous rage shown by Tigra’s royal consort. Over dinner, tempers flare when Tigra admits to having killed all three of Barin’s ambassadors. Flash is condemned to take part in the tournaments against Prince Cugar for the Queen’s royal sport. The first match is a swordfight, but Flash’s sword has been padded. Cugar wounds him just above the heart. Flash still manages to win, despite his weakening blood loss.

The second tournament sees Cugar armed with a laser pistol while Flash has only a shield to defend himself. Still the earthman manages to overcome his opponent. The third tournament is a fight between the two men with the Prince armed with a dagger, while Flash has one hand bound behind his back. Still, Flash disarms Cugar. The fourth tournament sees Flash chained to a pillar while the Prince attacks him with a sword. Flash manages to uproot the pillar using his chains as leverage and batters Cugar with it, defeating him.

Tigra is overcome with lust and tells Flash she intends to make him her new consort. Dale is heartbroken as Flash takes the Queen in his arms and kisses her passionately. While Flash begins romancing the Queen to try to win freedom for himself and Dale, the spurned prince plots his rival’s assassination. A surprising example of bedroom farce ensues when Flash pays a visit to Dale’s quarters after dark to try to convince her that he isn’t in love with the Queen.

Cugar follows Flash to Dale’s home, intending to kill him; but when he spies the lovers together he quickly rouses the Queen, hoping to expose Flash’s infidelity. Fidor, one of the Queen’s guards who is sympathetic to Flash, comes to warn them. Flash hurries back to his quarters and the Queen and the Prince burst in and catch Dale with Fidor. The Queen is furious, but Cugar is certain they can still catch Flash red-handed. They hurry back to his quarters to find Flash is in his room. An indignant Flash decks the Prince at the suggestion he was unfaithful to the Queen. The storyline ends abruptly with Flash deceiving Tigra into believing he desires to be her consort, Dale convinced of Flash’s love for her, Fidor determined to aid Flash and Dale, and Cugar left to plot revenge so that he can reclaim his place at Tigra’s side.