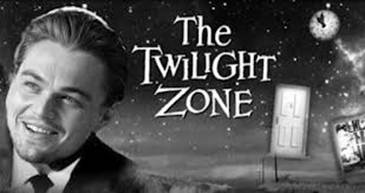 The epic of this film’s development is definitely beginning to look like a journey not of sight or sound, but only of mind.

Leonardo DiCaprio and his company, Appian Way Productions, have been developing a Twilight Zone movie since 2007. The script has been through a series of rewrites, with Joby Harold (All You Need is Kill, Tom Cruise’s latest film) being the latest scribe. There have also been numerous directors attached, with things looking up recently when Matt Reeves (Let Me In and Cloverfield) got onboard… until he dropped out shortly after, reportedly to head 20th Century Fox’s upcoming sequel, Dawn of the Planet of the Apes.

We were never actually told what the new Twilight Zone film was about, except that it would combine several episodes from the original Twilight Zone show. But today, we have a one-sentence plot summary that states:

The film follows a test pilot who winds up breaking the speed of light; when he puts down his craft, he discovers that he’s landed a bit late for supper – 96 years late.

Not a huge amount to go on then, although it’s nice to see a nod to The Twilight Zone’s favorite themes, namely space and time travel. It’s also not clear which of the episodes the movie will draw from.

But one thing is certain, there will be a twist at the end.

Warner Brothers does point out that, unlike the 1983 Twilight Zone movie, which was broken up into four segments – each with its own director (John Landis, Steven Spielberg, Joe Dante and George Miller) – this film will focus on one central story. 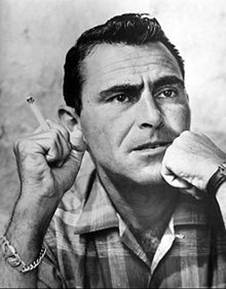 And what about the idea of bringing The Twilight Zone back to television? Perhaps if the film does well, that’ll be the next step. Word is, Damon Lindelof (Lost, Prometheus, and the upcoming Star Trek sequel) is in the process of signing a deal with Warner Bros. TV. Maybe he’ll consider tackling a Twilight Zone small screen reboot or some other Twilight-Zone-inspired project.

Warner is currently looking for a new director to helm the DiCaprio project, so hopefully it will see the light of day in the not too distant future.

Leo, there’s a signpost up ahead – your next stop, Hollywood, we hope.

PS: Did I mention Rod Serling is the creator of the television series The Twilight Zone? But you knew that, of course. Serling died in 1975, having sold the rights for Twilight Zone to CBS ten years earlier. Which I’m also sure you knew. So for the record, Mr. Serling currently has no opinion about Leonardo DiCaprio’s movie.