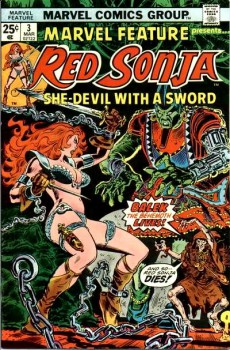 This issue begins with Sonja being chased by a militia. Apparently, robbing men on the highways is illegal even if the men you rob are other highway robbers. I’m curious who reported her, but that’s neither here nor there. By the second page, she has to make a Dukes of Hazzard-style jump over a ravine and on the third page, doesn’t make it. As Sonja and her horse fall into the chasm, her last words are, “Conan … I never … let you …” before she breaks her neck on the rocks below. The militia mutter something about it all being a terrible waste before riding off.

At this point, we learn that the fall into a chasm was simply an illusion cast by the sorceress Neja, an illusion so powerful that even Sonja thought for a moment that she’d died (which means that her horse must be freaking out). Once they’re safe in Neja’s cave (or as safe as one can be in a witch’s lair), she explains the history of the key (stolen from a brigand last issue) and what it opens. Apparently, Neja’s great-grandfather created a giant metal idol in the shape of a dead king and animated by the demon Belak. The key fits into a slot in the giant’s back and is the only way to turn it on or off.

One drugged drink later, Sonja is chained to a cave wall as Neja winds up the big green robot and orders it to slay her. Tricking it into smashing the chains that bind her, Sonja spends several pages dodging the construct, killing the witch in the process, before finally turning the key again and removing it from Belak’s back.

It’s a nice wrap-up to last issue, although it’s hard to imagine Belak giving anyone the power to take over the world if it has such an obvious and easily exploited weakness as a key in its back. Frank Thorne’s artwork continues to shine. And we get another hint this time around that Red Sonja might think of Conan as “more than a friend.”

I believe this is the first time Red Sonja faces a genuinely overwhelming supernatural threat on her own. Until now, she’s faced either human foes or received help from Conan. She not only defeats the giant robot (twice), but also kills Neja, all without her weapons (which for some reason are included on the cover, even though chaining someone up without disarming them first doesn’t make a lot of sense).

Next Week: Red Sonja and the Scooby Doo Mystery

I read these posts. I may not always comment but I’m glad someone is giving Red Sonja her due. These were great stories but they didn’t have the traction back then. I think she would be more accepted today with more women readers. Although the target audience for Red Sonja was teen males back then it still had a following.

Thanks, Wild Ape. An argument could be made that Xena is an updated version of Red Sonja. That was also a character clearly aimed at a young male audience that quickly developed a strong female following.

I have no idea how the reader demographics on the current Red Sonja comic (by Dynamite Entertainment) break down in terms of gender. But comics in general do have a stronger female readership now than thirty years ago.

I remember when this issue came out, but not because I bought it. The only comic I bought was Conan and the only Red Sonjas I ever picked up were the ones that featured a cross-over between the magazines.

But I remember my buddy, maybe 15 years old, pulling that comic off a spinner rack in a Little Professor bookstore in Dearborn, Michigan, turning to the page where Sonja is falling into a chasm and lamenting her relationship with Conan.

“Aw!” cried my friend, heedless of the bookstore’s other customers, struck with sorrow, looking up at me with wide, sad eyes. “Aw, man!”

Yeah, it was written primarily for boys, and sometimes it really hit the mark.