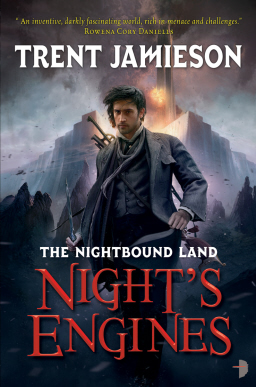 You’d think the rooftop headquarters of Black Gate would be a great place to stay up-to-date on the best new talent in fantasy. It probably would be, too, if I didn’t waste half my time watching H.R. Pufnstuf DVDs and trying to fix the coffee machine.

Still, I occasionally manage to overhear good tips around the water cooler. When I hear a new name enough times, I go back to my office, move around piles of pulp magazines until I can find a piece of paper, and make a note of it.

Australian writer Trent Jamieson generated a lot of chatter with his Death Works Trilogy. But it was last year’s Roil, the first novel in The Nightbound Land duology, that caused me to jot his name down on the back of a Jimmy John’s receipt.

Now Night’s Engines, the concluding volume of The Nightbound Land, has arrived, and suddenly it seems I can’t change the toner in the office copier without hearing the name Trent Jamieson.

Shale is dying. The vast, boiling maelstrom known only as the Roil has pushed humanity to the edge of extinction. The last cities teeter on the verge of collapse.

There is one hope, but it is enshrined in a decadent wastrel who does not want his destiny, and a young woman who seeks only an end to everything. And yet they go on, in search of the ancient weapons that worked against the Roil once, and must work again.

Even in fantasy, duologies aren’t that common (my spellchecker keeps wanting to change the word to Audiology, in fact). But for someone with precious little leisure time who still wants to join in on water cooler conversations, especially the ones involving that cute new intern, duologies seem like the way to go. Wish me luck.