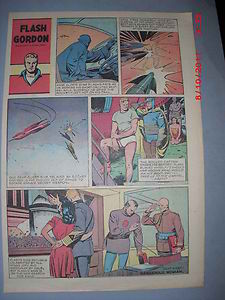 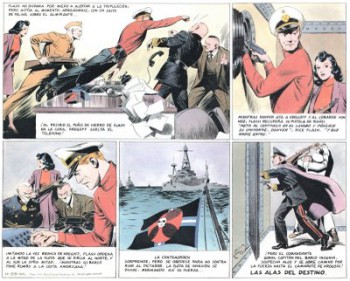 “Disaster in Space” was the fourth installment of Austin Briggs’s daily Flash Gordon comic strip serial for King Features Syndicate. Originally published between December 15, 1941 and January 17, 1942, “Disaster in Space” follows on directly from “War on Earth” and is a very brief storyline depicting the danger-fraught attempt by Flash, Dale, and Zarkov to return to Mongo to acquire more weapons to combat the Red Sword, which has plunged Earth into a Second World War.

Several rockets fail on re-entry into Mongo’s atmosphere, trapping their ship in perpetual orbit around the planet. Flash bravely ventures outside the ship to attempt to repair the damaged rockets, only to discover that no power remains. Despite the glaring omission that this should have been detected by the monitors on the console, there is more real science at work in this strip than has been demonstrated in the series up to this point. The use of the airlock and Flash’s dangerous repair work in space are particularly well done.

Dale suggests sending an S.O.S. to Mongo with what power remains, as it is only a matter of time before their oxygen is depleted. The message is received by their old ally, Prince Barin, now President of Mongo. His chief scientist, Dr. Zolov, uses a magnetic ray to pull the rocketship out of orbit, but loses control and sends the ship plummeting towards Mongo. Major Rodan pilots a Mongo warship on a seeming suicide mission to intercept the out of control rocketship and alter its trajectory. He succeeds, but at the risk of his own safety as both ships plunge into the sea. 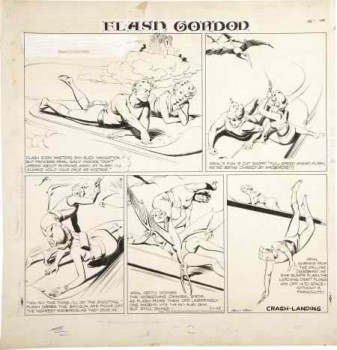 “Shipwrecked” was the fifth installment of Austin Briggs’ daily Flash Gordon comic strip serial for King Features Syndicate. Originally published between January 19 and April 25, 1942, “Shipwrecked” continues the storyline with Captain Pigor, filled with fear for his life, abandoning Major Rodan when he swims over to Flash’s rocketship to check on the travelers. The retreating warship piloted by Captain Pigor drags Flash’s rocketship behind it thanks to Dr. Zolov’s still active magnetic ray. Unfortunately, the damaged rocketship rapidly begins to sink, thanks to cracks in its hull.

Realizing he is guilty of mutiny, Pigor severs the magnetic tie between the ships and abandons them to their fate. While their rocketship is torn apart on the rocks, the four of them manage to swim ashore only to be shipwrecked on an unknown island. Flash is injured on the rocks after returning to the wreckage of their ship to retrieve tools. Suffering from a serious concussion, Flash pushes himself to build a makeshift wagon to allow them to explore their new home.

The injury has affected Flash’s mind, leaving him cold and detached. Following an attack from a giant boar that damages their wagon, Flash turns abusive and strikes Zarkov for questioning his well-being. Soon after, the party is attacked by a patrol of soldiers. Flash’s quick thinking leads them to capture the patrol and they learn they are on the island of Electra, under the command of King Radiol. Pigor had come ashore first and warned the King that Flash and the others are part of an invasion force. 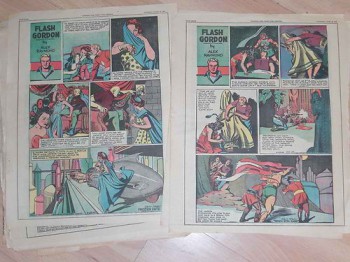 Flash has the soldiers tied up, except for a guide to lead them to Pigor’s rocketship. Their guide leads them into an ambush. Flash is captured and knocked unconscious after trying to save the others . Shortly after he recovers, he unexpectedly revert to his normal self in a ham-fisted development by script-writer Don Moore, who apparently lost interest in depicting Flash as brutal and uncaring midway through the narrative (or possibly was forced to do so by his editor at King Features as children were likely alarmed by this cruel and violent Flash). Moore had already begun to develop Rodan as a rival for Dale’s affections, but once Flash recovers, Rodan is quickly presented in a negative light as either cowardly or frankly villainous. A pity as the original plot strand seemed like a fresh wrinkle on one of Alex Raymond’s favorite ideas from the Sunday strip.

King Radiol is taken hostage by a quick-thinking Flash. The King is taken captive along with Pigor and all depart for the mainland in the traitor’s rocketship when, as luck would have it, the power fails on Pigor’s ship as well, plunging them into the ocean once again. Dale suggests building a sail and transforming the rocketship into a makeshift sailing vessel. The repetition of power failures and ocean crashes grows tiresome quickly until Briggs hits on a nice bit of invention by having them attacked by flying sharks. The image of great white sharks with fins that glide through the air is worthy of Alex Raymond and one of the few times thus far that Briggs has matched his mentor for inventiveness.

The other s flee below deck while Flash holds the sharks off with a ray gun. 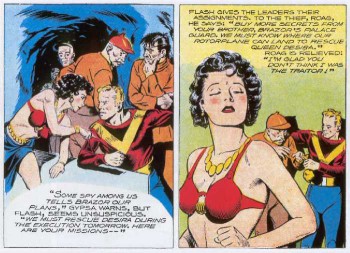 An unseen hand locks the hold trapping Flash topside with the flying sharks. Dale suspects the jealous Rodan. Zarkov dives overboard to try to rescue Flash, who has fallen into the shark-infested waters. King Radiol and Rodan succeed in holding off the sharks with gunfire until Flash and Zarkov can be pulled to safety. Only then do they discover that the saboteur was Pigor, who has broken free of his bonds. He locks the five of them out of the hold and plunges the ship beneath the waves in an attempt to drown them when a sudden hurricane strikes.

Our heroes survive the remarkably brief storm and Flash hits on the idea of smoking Pigor out once the ship surfaces for oxygen. The scheme works but taking back the ship does not solve the problem of their being cast adrift in a ship with failing power. Yet again, a distress signal is sent – this time to Electra, and King Radiol’s scouts come to the rescue as “Shipwrecked” comes to a hasty conclusion. The moments of genuine invention relieve a pervading sense that too much of the storyline has been a tired retread. While it is good to have our heroes back on Mongo once more, Austin Briggs has yet to take full advantage of the promise that Alex Raymond’s fantastic world holds.