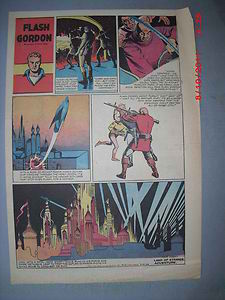 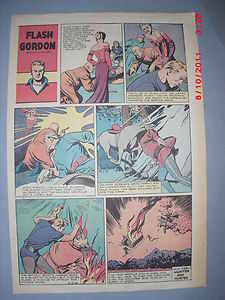 “War on Earth” was the third installment of Austin Briggs’s daily Flash Gordon comic strip serial for King Features Syndicate. Originally published between August 22 and December 13, 1941, “War on Earth” was the third story in the daily companion to Alex Raymond’s celebrated Sunday strip. The strip is due to be reprinted in 2013 as part of Titan Books’ ambitious Flash Gordon reprint series.

“War on Earth” runs on a parallel path to Raymond’s contemporaneous Sunday strip with the story opening with Flash, Dale, and Zarkov traveling from Mongo via rocketship back to Earth to deal with the unnamed dictator who has plunged their home into a Second World War. While Alex Raymond dealt with the Red Sword in the Sunday strip, “War on Earth” sees their rocketship touch down in Scandinavia, where our heroes quickly befriend refugees from the ruthless dictator who has invaded their homeland.

The refugees are attacked by enemy bombers. Flash perches on the edge of a cliff and easily picks the planes off with a disintegrator rifle they have brought from Ming’s armory. This act of bravery earns Flash the military leadership of the villagers. The Prussian-looking Colonel Ruvich of the Red Sword orders further bombardment by plane and tanks until the mountain pass is cleared. The siege drags out for several days with Flash successfully holding off the bombers with Mongo’s superior military technology.

Flash (and the reader) soon learn that there is more at stake than the survival of one village. A convoy carrying the King and Queen of Scandinavia is attempting to pass through the mountain pass. They are the target of General Keilich’s relentless campaign. Flash rescues the Scandinavian monarch and his queen after the Red Sword bomb the road in front of his car. Flash answers a question of his identity by stating he is “a friend of anyone who believes in freedom.” 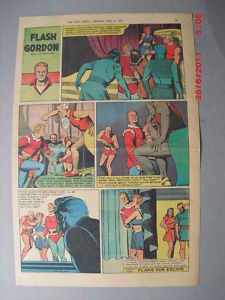 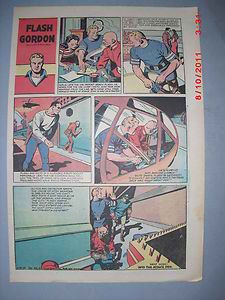 The patriotic nature of the strip in these weeks leading up to the United States’ entry into the Second World War make for interesting reading as there was not yet public support to join the Allied cause. Alex Raymond’s deeply held patriotism made the story direction a natural one, but it is still jarring to remove Flash and company from their fantastic otherworldly adventures and place them in a thinly-disguised version of then-current events.

The King and Queen evade capture and death only by escaping in the rocketship that brought our heroes from Mongo. After a quick dogfight, the royal family successfully flees their conquered homeland. Flash, Dale, and Zarkov pilot the rocketship to the dictator’s unnamed homeland to try to end the war themselves.

They land behind enemy lines and camouflage the rocketship with tree branches when they are discovered by a pair of young lovers, Peter and Trina. They discover the couple are also anti-war and happily accept shelter from them only to have the secret police arrive. In the ensuing melee, Dale is captured by the secret police and Flash is forced to surrender. Zarkov comes to the rescue and the tables are turned on the secret police.

Flash retrieves the hypnoscope from the rocketship and subjects the secret police to questioning. Disguised in secret police uniforms, our heroes make for the Red Sword’s secret mountain fortress, armed with the password to gain entry, in an attempt to abduct the dictator and force an end to the hostilities. The plot to capture the dictator (whose face is never depicted) is protracted, but contains some of Briggs’s best artwork. 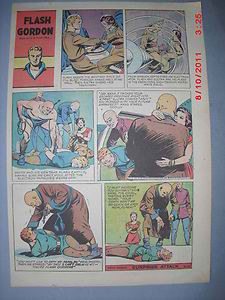 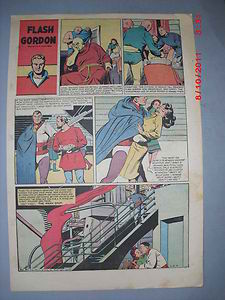 General Keilich foils the plot at the last moment only to be taken hostage himself. Flash, Dale, and Zarkov are cornered by enemy soldiers when Flash hits on the brilliant scheme of flooding the base to create a diversion to allow them to escape with their hostage. Commandeering a bomber, they take to the skies. A dramatic dogfight ensues. Shot from the sky, the plane crashlands in the forest. Keilich makes good his escape in the confusion.

The trio return to their hidden rocketship. Flash hunts down Keilich and recaptures him, but the delay brings the Red Sword’s bombers upon them. Keilich attempts suicide to prevent being turned over to the Allies. Flash’s failed attempt to stop him results in both men plunging from the rocketship without parachutes. Zarkov executes a daring mid-air rescue at the last moment.

Reaching Allied headquarters, Flash aids the military in interrogating General Keilich. The General overpowers his guard and manages to fatally shoot himself in the head before Flash can stop him. Armed with knowledge gleaned from Keilich of the enemy invasion plans, Flash leads a suicide squadron in a counterattack on the Red Sword’s bombers. Surprise gives the Allies the advantage and the enemy fleet, their munitions, and their factories are devastated in the attack. While the early victory belongs to the Allies, our heroes pilot their rocketship back to Mongo to retrieve more weapons to help defeat the Red Sword as “War on Earth” reaches its dramatic conclusion.

Interestingly, the storyline never identifies the Nazi-like Red Sword by name. While the story displays the same patriotic fervor as Alex Raymond’s contemporaneous Red Sword storyline in the Sunday strip, Briggs’s take on the material actually seems the stronger of the two. Alex Raymond’s longtime assistant was growing more confident and he was now doing as well as anyone could to honor Alex Raymond’s work. By the time the serial concluded, the attack on Pearl Harbor had finally brought the United States into the Second World War. Meantime, readers in desperarte need of escapism were eager to see how Flash, Dale, and Zarkov would fare on their return to Mongo, as we shall see in next week’s article.