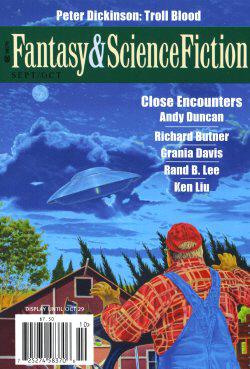 Andy Duncan gets the cover this issue for “Close Encounters,” a rural tale of alien abduction. Here’s what Lois Tilton says about it in her review at Locus Online:

Old Buck Nelson claims he doesn’t want to be bothered by reporters, even pretty girl reporters, sniffing around after the stories he used to tell about the alien who took him up to Mars and Venus and the dog he brought back with him. No one cares anymore, no one believes him. But now they’re making a movie and people are interested…

A really strong character, a narrative voice with strong authenticity, a strongly-realized setting. And a perfect ending to it all – RECOMMENDED.

The cover price is $7.50, for a generous 258 pages. Additional free content at the F&SF website includes book and film reviews by Charles de Lint, Chris Moriarty, and Kathi Maio; Paul Di Filippo’s Plumage From Pegasus column, “Call Me Ishmael”; and the “Curiosities” column by Chris De Vito. Cover artist this issue is Kent Bash. We last covered F&SF here with the July/August issue.

Dave — indeed! I checked there as well, and Barbara Melville did a great job.

In fact, she answers James’ question for us nicely. 🙂

Barbara Melville, in her Tangent Online review, writes the following:

Richard Lupoff’s “12:03 PM” follows on from the infamous “12:01 PM” and its sequel “12:02 PM.” Myron Castleman lives his life trapped in a time loop. The story begins with him visiting a psychiatrist, and like many of his actions, it isn’t the first time. The story explores the possibility of his time loops existing outside of him, as part of an unsettling bigger picture. This is light and entertaining and offers interesting food for thought surrounding free will and control. But while I enjoyed the plot, I found it difficult to care for Myron or his predicament.

Does it help to have read the earlier stories? “12:03 PM” didn’t make a lick of sense to me. It hints at cool stuff, but then doesn’t seem to feel obligated to craft those ideas into something whole.

I’ll leave that for someone who’s read both of the previous two stories to answer. 🙂

[…] the F&SF website includes book and film reviews, and other articles. We last covered F&SF here with the Sept/Oct […]