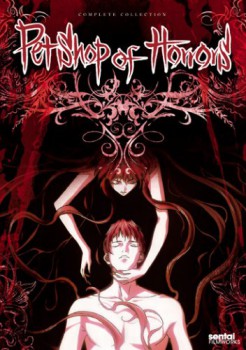 Originally a series of short stories appearing in manga (Japanese comic book) anthologies, Pet Shop of Horrors premiered on the Tokyo Broadcasting System as a series of short animated clips in 1999. Viewers would see a two-minute piece (usually between music videos or short films) every few days until an entire episode was completed. Four whole episodes were broadcast before the animated series was discontinued. The collected episodes were released in North America in 2000 by Urban Vision.

The set up of each episode begins in Chinatown (we’re never told what city, but an educated guess would be Los Angeles). A secluded pet shop, run by the mysterious Count D, purports to sell “love, hope, and dreams” to its varied clientele in the form of exotic pets. Each customer must sign a contract promising, among other things, to not show the pet to anyone else. The consequences of breaking any of the terms of the contract are dire. Among the pets sold in these four episodes are an evil rabbit (don’t laugh … it’s Watership Down-style evil), a gorgon, a mermaid, and a kirin (an ancient creature that grants wishes at a terrible cost). It’s clear that the Count also sells plain old dogs and cats; but he seems to reserve the exotic beasts for those clients in need of a blood-soaked moral lesson.

The series is like a cross between The Twilight Zone and Tales from the Crypt, with Count D acting as both narrator and instigator of these bizarre little tales. A subplot running through all four episodes concerns police detective Leon Orcot, who knows that something unseemly is happening at the pet shop, but of course doesn’t guess at the supernatural. He provides the perfect foil/audience for these stories and, as the series moves on, begins to go to the count more as an informant than a suspect. It’s easy to imagine an awkward friendship emerging between the two characters, had the series been allowed to continue.

While I’m normally a bit of a purist (maybe snob) about dubbing, the English voice cast for this series was simply amazing. John DeMita plays Count D as an androgynous male without ever slipping into any sort of effeminate parody.  He’s a thin ghost in a kimono whispering hideous secrets. Alex Fernandez plays Leon Orcot as a tough cop who is neither stubborn nor dull-witted, an intelligent detective who can adapt to the fantastic dramas of the series. The commentary track has a wonderful and funny conversation between DeMita, Fernandez and Jack Fletcher (voice director for the English adaptation of the series) and is one of the best I’ve ever heard.

The series only ran four episodes and came out more than a decade ago, so it was never terribly popular in the United States; but if you can find a copy, pick it up. Just creepy fun.