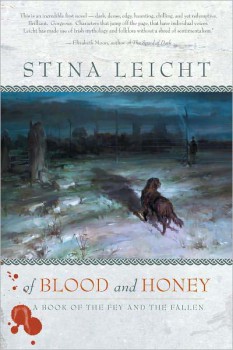 Perhaps I’ll be accused of going below the belt by saying this, but the most damning criticism I can offer of Stina Leicht’s Of Blood and Honey is that it took me several weeks of intermittent reading to finish.  It’s not an awful book by any means, but I never felt as though it generated enough momentum or sympathy to pull me from one reading session to another.

But let me discuss what I did like, which is quite a bit.  Although Leicht is ultimately writing a tale of faeries, demons, and inquisitors, she opts for a clean, modern style that’s well in keeping with the setting in 1970s Ireland.  The sentences flow smoothly from paragraph to paragraph and page to page.  There are some nice snatches of dialogue which, to me at least, rang as distinctly Irish: “It’s married I am, and it’s married I’ll stay.”  Leicht never resorts to spelling out accents, instead relying on vocabulary and syntax to convey dialect, which is a far higher and finer art.

The picture the book paints is rather grim, but ultimately I thought the book came through strongest on atmosphere and milieu.  I know very nearly jack-squat about the Troubles (my ancestors left Ireland much earlier, more around the time of the Potato Famine), but the sense of constant fear and persecution Leicht evokes is powerful.

She tells the story of Liam, a young man who has never known any father besides his step-father Patrick.  His mother tells him that he’s the product of her forbidden union with a Protestant, but Liam has always suspected that there’s something more alien about his origins.

At the book’s opening, Liam is arrested during an IRA riot and thrown into a concentration camp. where he is ruthlessly bullied by his fellow prisoners, raped by the warden, and beaten repeatedly by men from both sides of the chain-link fence.  His misery awakens a monstrous transformation in him, as he turns into a huge black wolf to avenge himself on the warden, and Liam begins to learn that his father was something much stranger than a Protestant: one of the fae, Ireland’s ancient guardians, masters of wild magic and war.

Liam’s life over the next several years is woven from the two threads of his monstrous fae nature and his broken life that takes him in and out of prison and deeper into the guerrilla war against British occupation.  He goes from prison to a job as a taxi driver provided by an IRA affiliate, which in turn drafts Liam’s services as a get-away driver for bank robberies.  As the novel progresses, Liam begins to suspect that his misfortunes aren’t random, but are the work of a malignant creature who is neither Fae nor human, but a Fallen, a demon bearing an ancient grudge against Liam’s fae father.

As that brief plot summary probably made clear, Liam’s life isn’t a happy one, although enumerating all his misfortunes would include some major spoilers.  Suffice to say that what he goes through is so relentless that I eventually found it off-putting.  The early scene of prison-rape, in particular, struck me as unnecessarily wretched.

There are beacons of hope in Liam’s life, notably his mother, Katherine, and Father Murray, a priest involved with the Church’s demon-slaying arm (which I truly wish existed in Real Life).  Father Murray is the star of one of the book’s main subplots, as he learns that the Church has made a terrible mistake in lumping the often-benevolent fae into the same category as Fallen demons.  He serves as a mentor to Liam, while also trying to convince his superiors of their error.  He’s probably by favorite character in the book, but that’s partially because I’m always happy when priests are portrayed sympathetically.

Ultimately, I felt that the supernatural element in the book was weakened by a dearth of information.  It wasn’t until the last twenty or thirty pages that I got any information on the nature of the Fallen, and the distinction between the Fallen demons and their malevolent fae allies wasn’t clear at all.  Perhaps the sequel (And Blue Skies From Pain) reveals more, but I felt that Of Blood and Honey could have benefited from a deeper exploration of its world.

In the end, I can only give it a tepid recommendation.  If you’re craving something with Irish flavor galore, you might find Of Blood and Honey worthwhile, and the prose is more than good enough to make it a pleasant experience.

A fine review, Sean. I’m still highly intrigued by this book, and I’ve heard a lot of great things about Stina Leicht. I missed her party at Worldcon, although I really wanted to go.

This book is very high on my to-read list. I’ll let you know what I think.

After listening to an interview with Leicht last year, I’d been tempted to pick this book up and add it to Mt Toberead.

But then a month or so back, I read a review that basically said she uses the American “Plastic Paddy” idea of what went on in NI during the “Troubles” as the backdrop…

Since that would cause me to throw the book across the room, I have just about decided to pass on it.