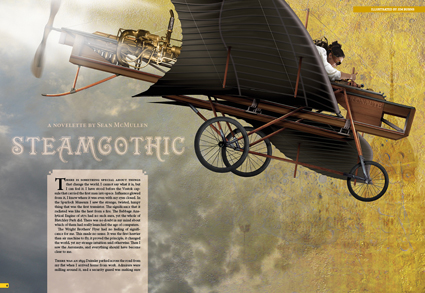 Steampunk is a literary subgenre that has also sprouted a lifestyle that encompasses fashion, music, and art based loosely on a philosophy of hands-on, do-it-yourselfness in an age of touchscreen virtual experience. To my knowledge, Sean McMullen’s “Steamgothic” is the first steampunk story that is also about the sensibility of the steampunk community. The narrator is an expert restorer of steam engines whose day job is to customize ultralight aircraft motors. He’s approached by a couple who have possession of an 1852 Aeronaute, a steam-powered aircraft which, had it actually flown, would predate the Wright Brothers by a half-century. He’s invited to participate in a restoration with the intent of proving this possibility. The initiative becomes the subject of a reality TV show called The Aeronauteers, and plenty of drama ensues, much of it more human than mechanically-related, with hidden motivations gradually revealed beyond postulating how if the Aeronaute had actually flown, would history have changed?

Recommended reading, even if you have only a slight interest in how the cogs actually turn. You can find it in the current Interzone.