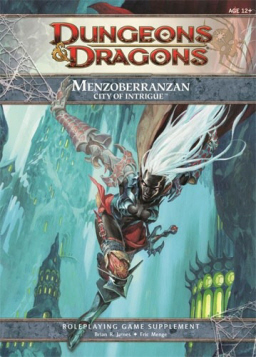 One of my favorite RPG settings of all time is Menzoberranzan, the 1992 boxed set from TSR that drew liberally from R.A. Salvatore’s best-selling Drizzt Do’Urden novels. Written by Ed Greenwood, Salvatore, and Douglas Niles, the box detailed the famous City of Spiders, the subterranean birthplace of the drow ranger, in three thick books and a set of gorgeous maps. Packed with 20,000 drow inhabitants, hundreds of thousands of humanoid slaves, and countless secrets and simmering rivalries, the home of the drow was an ideal adventure site for intrepid (and suitably high level) players.

Released nearly 20 years ago for second edition AD&D, Menzoberranzan has not seen an update since and has been out of print for over 15 years. It was featured in the popular Menzoberranzan PC game from SSI/DreamForge, part of their Forgotten Realms product line, in 1994, and very prominently in the six volume War of the Spider Queen novels, but it’s been far too long since my favorite underdark city-state appeared in a new edition.

The wait is finally over. Wizards of the Coast has released an updated version in Menzoberranzan: City of Intrigue, now available in hardcover:

The profane beauty of Menzoberranzan reflects the true nature of the drow and Lolth, their vile spider queen. Within sculpted palaces, factions vie for dominion, spin webs of conspiracy, wage war on the surface realms, and spread poisonous rumors. Meanwhile, predator stalk the twisted streets, plotting murder and mayhem. The city has no pity for fools and weaklings.

Menzoberranzan: City of Intrigue breathes new life into the fabled home of Drizzt Do’Urden and leaves no stone unturned. This book explores the city, tells the stories behind important drow houses and factions, and peeks at the mysteries waiting to unfold in the deadliest city of the Forgotten Realms world. This product is compatible with all editions of the Dungeons & Dragons Roleplaying Game and features a poster map of the city.

Menzoberranzan: City of Intrigue is 128 pages in hardcover, heavily illustrated in full color. The poster map is rather colorless, but large and extremely detailed. It was released on August 21 for $29.95.

You can see all of our recent New Treasures here.

Would I be dating myself if I said for me Erelhei-Cinlu was the ultimate Drow city?

Ha! Yes you would, but in a good way.

Erelhei-Cinlu, the drow city at the end of Vault of the Drow (Gygax’s 1978 module which completed the Descent into the Depths trilogy), was a masterpiece of imagination. My only beef with it was that it was virtually undetailed! Somewhere in my ancient D&D campaign notes from high school is a failed attempt to fill out that vast city before my players reached it… Sadly, they died before ever reaching the walls.

The good old days when a module was 8 pages long with maps on the inside of the cardstock cover. By the standards of the time, D3 was fairly epic.