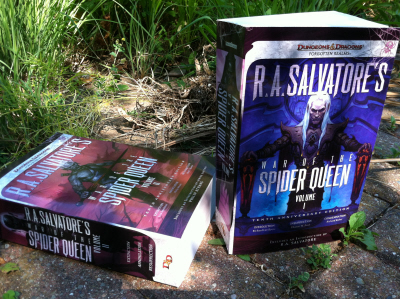 Ah, the lure of the fat fantasy novel. There’s really nothing quite like it.

Yes, I love short fiction and, by extension, I love short novels. But when you really fall in love with a book or series, nothing satisfies like a volume that weighs as much as a phone book.

Which is why I was delighted when two fat fantasy compendiums landed on my doorstep this week: R.A. Salvatore’s War of the Spider Queen, Volume I and Volume II.

These aren’t written by R.A. Salvatore.  You can tell because his name is in the title. R.A. Salvatore created the popular character Drizzt Do’Urden and has written nearly two dozen novels featuring the drow ranger, several of them best-sellers. War of the Spider Queen returns to Drizzt Do’Urden’s homeland, the Underdark, to spin a tale of a ragged band of four dark elves on a desperate quest to find Lloth, drow goddess and the demon Queen of Spiders, and save their subterranean city of Menzoberranzan and the entire dark elf race.

The two-volume War of the Spider Queen collects all six novels: Dissolution by Richard Lee Byers, Insurrection by Thomas M. Reid, Condemnation by Richard Baker, Extinction by Lisa Smedman, Annihilation by Philip Athans, and Resurrection by Paul S. Kemp. All were published between 2002 and 2005, with R.A. Salvatore overseeing the development of the entire series.

These are handsome and satisfactorily hefty volumes. I took them out and photographed them on the bricks of my front patio, so you can get a sense of their size. (Click on the image above to get a bigger version).

Volume I contains the first three novels; it is 1,074 pages for $15.95 in trade paperback. Volume II gathers the last three; it is 1,076 pages for $15.95. Both have cover art by Brom. They are published by Wizards of the Coast and are now available.

How do those compare to Salvatore?

I read the first 6? (whatever is in the first two omnibuses) Drizzt books but couldnt get over “seeing the dice” nature of them, so I never bothered to read further.

Opinions vary on how well each of the various authors did, obviously.

But I like the fact that Salvatore was the overall architect for the series. It’s worth reading just to see so many talented authors play in his backyard.

These books are great. I really enjoyed them. But they are nothing like Salvatore. Each book has a different writing style and, while every book is closely related, it seems as if each author kind of took hold of a particular character or two and really fleshed them out.

I was at an interview where Bob talked about his involvement and he said that it should have been titled Phil Athen’s “War of the Spider Queen,” because of all the work he did.

[…] part of their Forgotten Realms product line, in 1994, and very prominently in the six volume War of the Spider Queen novels, but it’s been far too long since my favorite underdark city-state appeared in a new […]