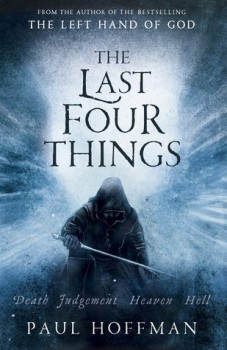 The most striking quality of this series, and a key element of its charm, is a style of narrative that borders on Absurdism. Bad luck and weird coincidence drive much of the story, sometimes handing Cale his victories, sometimes causing master-manipulator Bosco’s plans to fall almost entirely apart. Hoffman’s narrator has a sly humor that seems to look on history as a messy combination of ridiculous motivations and lucky happenstance, which makes the notion of Cale’s “destiny” – as the savior or destroyer of the world – so interesting.

Cale is driven by factors beyond his control, certainly: a wicked temper, the product of years of abuse; his own reputation, the product of skills he acquired as a result of some lucky brain damage; and the machinery put in place to guide him as a hero of the Redeemer genocide, all built by a man who absolutely believes in Cale’s destiny. But that same destiny is a product of Bosco’s vision; it’s not written in any sacred prophecy, Cale wasn’t born with a purple pimpernel on his buttock. There’s no indication that this is a world at all in which Bosco’s vision is indicative of a real prophecy. There’s only happenstance – the same happenstance that a card player will call divine intervention when he draws four kings at once, but just bad luck when he’s looking at a busted flush.

It leaves a refreshing and interestingly messy world, a comment about the nature of destiny-as-a-product-of-hindsight that’s far more compelling – or, at least, far more human – than any number of fantasy novels that rest on hidden scrolls or divinely ordered universes.

Even Hoffman’s remixing – sometimes painfully distracting, as he cribs idiosyncratic lines and phrases whole cloth from Hamlet and Macbeth, takes entire battles out of context and puts them into the story with little change – is given new merit by this Beckett-lite approach to the universe. Those similarities to our own world – the same names on different people, the same battles in different places, the same lines for different reasons – only drive home the essential similarity to our world: one in which destiny and interconnection is as much a product of our own need for it (and thus our own backgrounds, and whatever our own faults are that drive those needs) as it is human action or intent.

The Last Four Things is a strong sequel to The Left Hand of God: suspenseful, interesting, and with a clever eye that flits dexterously between the human tragedy of the world close-up and the absurd comedy of the world from a distance.