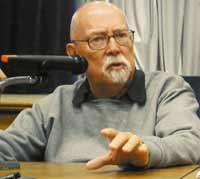 Harry Harrison, the prolific author of nearly 60 novels (including Deathworld; Bill, the Galactic Hero; The Hammer and the Cross; and eleven titles in The Stainless Steel Rat series) has died.

Harrison’s first publication was the short story, “Rock Diver,” in the February 1951 issue of Worlds Beyond. But he entered the field as an illustrator, working on some of the most fondly-remembered comics of the 50’s, including EC Comics’ science fiction titles Weird Fantasy and Weird Science. He also wrote a number of syndicated comic strips, creating Rick Random and becoming the main writer of the Flash Gordon newspaper strip in the 50s and 60s.

But it was as an author that Harrison really made his mark. His first novel was Deathworld (1960), a book that was still in print and much discussed two decades later, when I was in high school. He wrote two more in what was eventually to become The Deathworld Trilogy. His 1966 novel Make Room! Make Room! became the basis for the famous science fiction film Soylent Green (1973), starring Charlton Heston.

Harrison had an affinity for series work, and most of his 58 novels are part of a series including the Brion Brandd novels (2 titles), Tony Hawkin (2), To the Stars (3), The Hammer and the Cross (3), Stars and Stripes (3), Eden (3), Bill, the Galactic Hero (7), and The Stainless Steel Rat (11). Much of his short fiction also followed this pattern, including the nine “Matter Transmitter” stories.

According to The Official Harry Harrison Website, Harry Harrison died today at the age of 87. He was a vastly influential writer and editor during the formative years of the genre, and he will be much missed.

A real loss to the field.

I write the way I do because of him. So sad. He lived here in Ireland and several times I thought I was about to get to meet him at a con, but he was always too ill to attend. RIP — Deathworld, Wheelworld, Stainless Steel Rat, as well as brilliant, punchy short stories. RIP.

I loved the Stainless Steel Rat when I was a young, grade school age, sci-fi reader. Loved the humor and clever escapes from tight situations.

Very sad. I discovered him in 1989 when I encountered West Of Eden in a bookshop. Groundbreaking work and I am glad to have enjoyed a number of his other works. Oddly enough the only Rat I read was the introductory short in a sci-fi anthology. On a slightly darker side wonder how long before someone publishes a complete harrison series…

One of my favourite authors, I loved the “To the Stars” trilogy. One of the concepts from it that blew my mind was the concept of a portable computer with a holographic keyboard.

I had no idea he was such a big influence on you. I wouldn’t have guessed it from your writing, probably because I never read you and Harrison back-to-back. You must have encountered him fairly early.

> I loved the Stainless Steel Rat when I was a young, grade school age, sci-fi reader. Loved the humor and clever escapes from tight situations.

Ditto. I think I first encountered him in high school, in the pages of ISAAC ASIMOV’S SCIENCE FICTION ADVENTURE MAGAZINE, a short-lived companion to Asimov’s. I was a little too old at that point, and never really caught on to the series.

I’d love to see a complete Harrison collection, similar to what NESFA Press is doing with Poul Anderson. That would be delightful.

>One of my favourite authors, I loved the “To the Stars” trilogy.

I’ve never read that one, but always wanted to. It was popular enough to stay in print for years.