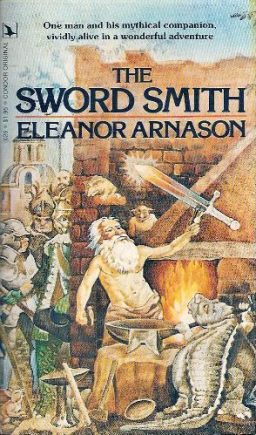 I first became acquainted with Eleanor Arnason through her powerful science fiction novels, including To the Resurrection Station (1986), Ring of Swords (1993), and especially A Woman of the Iron People (1991), the novel which won both the first Tiptree Award and the Mythopoeic Award in 1992.

But Arnason has a fine rep as a fantasy author as well. Her Daughter of the Bear King (1987) — the tale of a Minneapolis housewife who finds herself in a strange world where she’s hailed as a long-awaited hero, a true bear and shape-changer called to fight a creeping evil — was her second fantasy novel. Her first, and her first published novel, was The Sword Smith (1978).

The Sword Smith is an odd book in many ways. In begins in media res, with our heroes Limper, a lame smith, and his companion, the young dragon Nargri, in full flight from the King of Eshgorin, who has put a price on their heads. The reasons for all this are gradually revealed in a book that’s more travelogue than tightly-plotted heroic fantasy, with the two companions having a variety of adventures, meeting new companions, getting captured (more than once), and getting in and out of sticky situations. That’s our two heroes on the cover, making a sword (click for bigger version).

The Sword Smith is sometimes described as “low fantasy” (as opposed to high fantasy), chiefly because of the lack of plot. But it’s also praised for its originality; world building; and themes of individual freedom in the face of tyranny, the value of artistic aspirations, and prejudice.

It took me a while to track down a copy, but I finally found one last week. I think this has more to do with the publisher — a tiny outfit called Condor Publishing, who as far as I know published virtually no other fantasy novels — than any lack of quality. For whatever reason, copies are scare, and the book has never been reprinted.

The Sword Smith is 208 pages in paperback. It was published in 1978 by Condor Publishing, with a wraparound cover by A. Echevarria, and had an original cover price of $1.95.

There’s a ton of used copies at Amazon, a signed copy at a reasonable price (under the collectible link), and one new copy at a ludicrous price (I did once pay nearly $70 for a used copy of one of Sheri S. Tepper’s amazing Marianne trilogy, but that was well worth it–it’s now available in a Kindle version, but not in the U.S.!).

Yeah, that’s where I got mine. Had to order it from Amazon after years of being unable to find a copy!