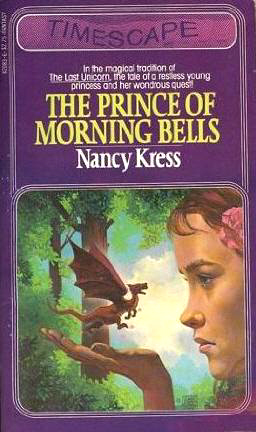 I first discovered Nancy Kress through her brilliant SF short stories, like the Hugo- and Nebula-Award winning  “Beggars in Spain.” But she has an impressive fantasy resume as well, including her early novels, The Golden Grove (1984) and The White Pipes (1985) — which we cover here.

The Prince of Morning Bells (1981) was her first novel, and I’m embarrassed to say I’d never heard of it. Until I found a copy in Martin Harry Greenberg’s vast paperback collection.

Only yesterday, when marvels and mystery blessed the Universe…

Lovely Princess Kirila rejected royal traditions to seek wisdom and truth at the Tents of Omnium at the Heart of the World. With her protector and savior, the enchanted purple dog, Chessie, she reaches the kingdom of the Quirks — but their rational society cannot help in her hazardous quest. Nor can the people of Ruor, whose mystic religion threatens to enslave her. It is only at the Castle of Reyndak that a handsome young prince succeeds in interrupting her journey…

But years later, Kirila will again take up her quest with faithful Chessie, to reach the fabled tents, and discover the amazing secret at the heart of every woman’s world.

You’ve got to hand it to any book summary that includes the words “enchanted purple dog.” That’s some serious book blurbing chutzpah right there.

The original Timescape paperback is pretty hard to find (and no, you can’t have mine.) But we live in the era of digital books, and if you’ve got an e-reader, then The Prince of Morning Bells can be all yours for just $5.99 in a revised edition with a new afterword by the author.

The Prince of Morning Bells is 236 pages. It was originally published by Pocket Books, as part of their Timescape line, and released in a revised edition in trade paperback by FoxAcre Press in 2000 (still in print). It is currently available in digital format for the Nook and Kindle.

One of my favorite authors. Like you, I discovered her through her short stories, which are perennials in year’s best collections.

I did already have The Prince of Morning Bells, although I’m guessing in the FoxAcre Press version. The cover on the Timescape paperback is prettier though.

The Timescape titles had a strong focus, a good visual style, and some stellar material.
They were the last publisher with the courage to offer Clark Ashton Smith in mass market pocket book editions. The City of the Singing Flame is still one of my favorite CAS collections.

Also, Timescape offered an anthology of George R.R. Martin’s short fiction entitled Sandkings. This is a superb collection, and not just because of the famous title story.
The book also has the tale called In the House of the Worm, an amazing piece of gothic science fiction influenced by C.A Smith and Jack Vance (and maybe a little of Heinlein’s Orphans of the Sky).
I don’t believe In the House of the Worm has been reprinted anywhere since, and I was disappointed to find it was not included in either of the two more recent ‘Dreamsongs’ volumes that supposedly collect Martin’s best short fiction.

More than half of the vintage treasures you blog about make me wish I could ask.

> The cover on the Timescape paperback is prettier though.

Yes, it certainly is. The artist is not credited, but I’m pretty sure it’s Carl Lundgren.

> Sandkings… also has the tale called “In the House of the Worm,” an amazing piece of gothic science fiction
> influenced by C.A Smith and Jack Vance (and maybe a little of Heinlein’s Orphans of the Sky).

Your last suggestion (Damon Knight’s “Stranger Station”) turned out so well I had to write a separate blog post about it. So I’ll be digging up my copy of Sandkings to read this one new post haste!

> More than half of the vintage treasures you blog about make me wish I could ask.