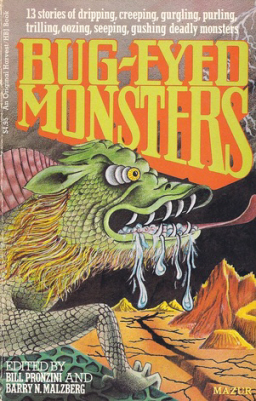 Last week I posted a brief article on Damon Knight’s landmark SF anthology, A Science Fiction Argosy (and I mean that in the literal sense — it’s so large that for years I used it as a visual landmark when scanning my bookshelves.) The first response in the Comments Section was from the esteemed John C. Hocking, who wrote:

Some years back I read the anthology Bug-Eyed Monsters, edited by Bill Pronzini and Barry Malzberg, which leads off with Knight’s story “Stranger Station.”

This story knocked me out of my chair.

It is not a clever punch-line kind of tale, it’s a bravura piece of serious space operatic sf with strong characters, a vivid setting, genuinely alien horror, and a plot that manages to make the outcome of a single character’s dire situation a crux of cosmic importance without pushing the whole tale into wide-eyed melodrama.

The other stories in the collection were worth reading, but Knight’s tale put them deep in the shade.

So naturally I had to dig up my copy of Bug-Eyed Monsters, a 1980 Harcourt Brace Jovanovich trade paperback, to see what all the fuss was about. First thing I noticed was the Ruby Mazur cover. Mazur, who created over 3,000 album covers, was one of the most famous rock ‘n’ roll cover artists of the 70s and 80s. His work here is serviceable but not particularly attractive, with a rather drooly BEM lording it all over a pulpy alien landscape.

But we’re here to talk about “Stranger Station,” not 70s cover art, and Mr. Hocking is right that Damon Knight’s story, which first appeared in 1956 in F&SF, is a fine piece. The editors give it pride of place as first in the anthology, calling it “a virtuoso performance — arguably, one of the two finest BEM stories ever written (the other being, of course, H.G. Wells’s The War of the Worlds.)”

I can’t quite bring myself to those heights of praise, though — or even Hocking’s level, to be honest. “Stranger Station,” which features a lonely human stranded on a vast space station for a 6-month contact mission with a supposedly-benevolent but extremely mysterious alien race, has plenty of scares and twists. But the ending is awful, and the story overflows with 1950s-era zest for space conquest — “conquest” being the operative word. When your protagonist is willing to go to any lengths — including suicide, murder, and condemning billions to an early death — to make sure humanity’s path to galactic conquest is unimpeded in any way, you know you’re witnessing the worst paranoia of the US-Soviet Space Race writ large on the page.

Much better, in my opinion, is Donald A. Wollheim’s contribution, “Mimic” (originally from Astonishing Stories, 1942). Or if we want to go even farther afield, Eric Frank Russell’s “Dear Devil,” which isn’t in Bug-Eyed Monsters at all, but still contains one of the most memorable BEMs in SF history.

Still, Bug-Eyed Monsters has lots to recommend it, including classic SF monster tales by Robert Bloch, Fredric Brown, Poul Anderson, A.E. van Vogt, C.M. Kornbluth, Isaac Asimov, and many others. The 273-page trade paperback is the only version (there was no mass market paperback edition), but as of this writing new copies are still available on Amazon.com for as little as $2.01.