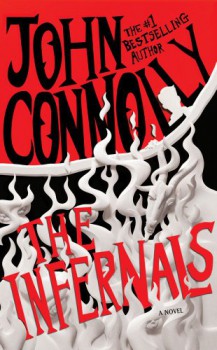 Almost-Armageddon books are a marvelous niche in the fantasy market, ranging from serious examinations and thrillers to horror and gore. One of this reviewer’s favorites is the lighter side of Armageddon, as seen in Neil Gamain and Terry Pratchett’s Good Omens or Richard Kadrey’s Sandman Slim series.

John Connolly’s approach fits right into this niche, with a marvelous blend of suburban London quirk and the Large Hadron Supercollider in Cerne, Switzerland.

Sound a bit on the these-two-things-don’t-go-together side? Relax, set aside your concerns, and go for ride with Samuel Johnson and his faithful dog Boswell through the looking glass and straight to Hell.

The second book in a young adult series, The Infernals finds Samuel Johnson and his faithful dog Boswell as outcasts in the prosaic town of Biddlecombe, a result of literally Hellish misadventures (detailed in The Gates). No one in Biddlecombe is interested in the fact that Johnson and Boswell are blameless in the events that that book chronicled, instead blaming scientists in far-away Cerne, Switzerland. Those scientists are the ones to blame for the trouble in the first book, and return in The Infernals to wreak havoc once more. In the name of science, of course.

Young Samuel simply wants life to return to the way it was before the gates of Hell were opened and perhaps one day attract the attention of a particular young girl. This would be easier if Mrs. Abernathy, spirited away to Hell in the first book, wasn’t dead set on destroying our young hero.

Thus it is that Samuel and Boswell find themselves sucked into Hell, with the unknowing help of certain Large Hadron Collider scientists, and where Samuel finds himself on the run from demons on every side.

John Connolly has a marvelous sense of humor and boisterous writing style that perfectly suits this tale, and includes in the cast of characters a group of performing dwarves, an ice cream truck, two policemen so marvelously British that they simply go on being policemen no matter the locale, and the return of The Scourge of Seven Deities, the demon Nurd.

Although this book is marketed as “young adult,” the only noticeable difference from a “regular” (note that I don’t say “adult”) novel is the lack of swearing and sex scenes written with gynecological accuracy. It’s liberally sprinkled with footnotes that explain certain words and concepts in hilarious ways. In fact, certain Monty Python references that were a delight for this reader would likely sail over the head of a “young adult” reader.

That’s a long way of saying that this book (and The Gates) are great fun for any reader, young or old. Like the classic Bugs Bunny cartoons, adults will appreciate The Infernals in a different and more sophisticated way than a younger reader might, to the detriment of neither.

Most of the book is set in Hell, and we are taken on the usual Dante-an tour of different sections. Unfortunately this is a drawback, which is shared in near every book set wholly or partially in Hell since, well, Dante, which is the actual imagining of Hell. Everyone has their own idea and Mr. Connolly’s is very much his own. That said, Hell is such a thoroughly ingrained concept for most of us, referred to in seriousness or jest in so many works for literally centuries, that a visit to Hell can seem. . . familiar. This can be disconcerting if one is of a Christian bent, but even a Hell with an ice cream truck also has to have actual torments, rules, hierarchies, etc., that all Hells have. And a Hell that didn’t have these things wouldn’t be Hell, so it’s a rather circular complaint.

I wished that more of the book took place in Biddlecombe, and taken a quicker “tour” of Hell, even if it may have been necessary in order to set up the next book (which is obviously coming). That said, the characters of Samuel and beloved dog Boswell anchor the story, and we root for them both to survive and return home.

Also a great treat are the scientists in Cerne, Switzerland. The actual scientists there may protest when I say I found their representations in The Infernals to be likely quite realistic. Although they do not feature as largely in this tale as they did in The Gates, I find it hilarious that the Hadron Supercollider may actually bring about Armageddon, something that has been suggested in far more serious journals and articles than this novel. But those characters demonstrate as well as any Connolly’s real strength: character. No matter how outrageous the situation, the characters are ones we can see in our heads while reading, including a dog. That’s no mean feat, and something to laud, and I do so now. Even the dwarves (no slight to dwarves, no protest letters please unless you’ve read the book), who at first seem like they got lost on their way to The Time Bandits audition, bring something to the table. The various demons and schemers in Hell also emerge with distinct personalities, as putrid as they may be.

The Infernals is a romp and sometimes made me laugh out loud, so not matter your age, check it out for yourself. Do it. Go to Hell. But if you do for real, bring a dog.