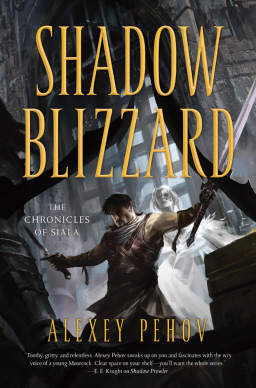 I tend to avoid fantasy trilogies until the third book is published, for the same reason that I don’t date musicians under 30. Because I’m married. Duh.

Man, that didn’t make any sense. I blame these stupid cold medications. My head feels four feet in diameter, and my thoughts seem to take… longer… to travel from one side to the other. I wish Alice were here to make me soup and send me to bed, but on Friday she left to take our son Tim to music camp in… um… I forget. Some state that has music camps.

You know what I need? A really good fantasy I can curl up with until I feel better. And now that Shadow Prowler, the third book in Alexey Pehov’s epic The Chronicles of Siala, has arrived I can do just that. Shadow Prowler is the sequel to Shadow Prowler and Shadow Chaser. Here’s what Matthew David Surridge said about the first volume in Black Gate 15:

Pehov has written a fantasy trilogy, with elves and orcs and dwarves and wizards and a quest… this first book, at least, feels fundamentally like a game of Dungeons and Dragons. The story is even structured around the exploration of an ancient burial ground, Hrad Spein, the Palaces of Bone, filled with traps, magic, and the undead… there is an enjoyable buzz of plot going on in the book. In fact, once you get over the echoes of Tolkien, in the form of the ancient artifact, the quest story, the elves and dwarves and the setting, you notice that the actual structure of the book is closer to Harry Harrison’s The Stainless Steel Rat: a thief tells the story of how he is captured by the good guys, and made to work for them.

Ancient burial grounds, traps, magic, the undead, and a reluctant thief. Yup, that could get me through this cold. Here’s the plot summary for the third volume, just for comparison:

Shadow Harold’s quest is almost at an end: he and his companions have fought long and hard to make their way to the tomb Hrad Spein, in search of the magic horn that is their only hope to defeating The Nameless One. The journey was perilous, and many in their company did not survive. Together, however, they have come further than anyone else ever has — but their struggle isn’t over just yet…

Wow. Three books, and they’re still in the same dungeon? Holy cats, that does sound like an epic game of D&D. If that’s not enough to sell you, here’s the cool book trailer.

Shadow Blizzard is 462 pages in hardcover. It was published on April 24th by Tor, and has a $26.99 cover price. It was translated from the Russian by Andrew Bromfield.

Um, is this a humorous trilogy? If not, that trailer does a lot to keep me from buying.

Really? Why is that?

I don’t think the book is intended to be humorous, although the narrator does have a snarky tone at times.

For starters, the voice over doesn’t seem to take it seriously. But my first laugh came at the running through the forest clip. Really, all of the clips used seem to carry Python overtones. If it’s setting up a dungeon crawl on par with Jim Hines’, that may be appropriate. If it’s for a serious work, I gotta wonder what Tor’s thinking.