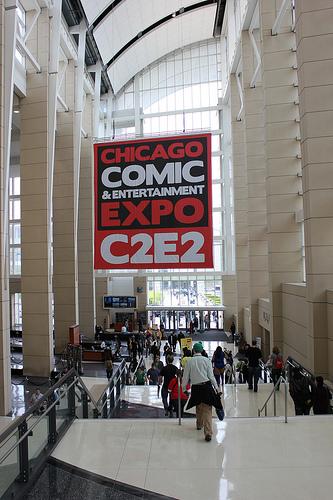 Last weekend, Chicago’s McCormick Center played host to the annual Chicago Comic and Entertainment Expo (C2E2 for you cool kids), and once again I am reminded that not all the “interesting” people have pulled up stakes for California.

Amidst the oodles of Avengers merchandise, aisles of comic illustrators (many of whom appeared to have a near cult-like following) and celebrity autograph queues, mingled individuals who seemed to have ample expendable income for use on high-end costumes.

Yes, there was indeed a costume contest much later in the afternoon, but that didn’t explain why a very thin dude in a wig and fishnets was walking around posing as Lady Gaga.

It is sights like this which remind me that should I ever venture into the San Diego ComiCon; my head would likely explode.

Still, the popularity of C2E2 continues to grow year over year; so much so that in 2012 it was relocated to a larger venue in the building across the street from 2011’s location.

And though I could have easily grabbed a spot on the floor opposite the entrance and spent the day people-watching, Black Gate photog Chris Z and I waded in with the rest of the press just before the opening bell on Saturday.

Our first stop was the aisle of tables where the celebrity line up was signing autographs and taking pictures and incidentally, where I only scored one for three of my intended targets.  It turns out local boy John Cusack wouldn’t be out promoting his new flick The Raven until Sunday.

That’s okay, I know what Starbucks he frequents here in town and I can assault him for an interview there.

The next miss was a bit of a surprise.  Somehow I thought getting some face time with Val Kilmer wouldn’t be that difficult.

Yes, it was announced recently that he’d be starring in a Mark Twain bio-pic but really, is anyone in Chicago looking for Val Kilmer?

It turns out they apparently are and my Black Gate creds did nothing to help me past the line that snaked down the hall and around the corner; and this line was only to buy a ticket to get back in another line to meet Mr. Kilmer.

As Chris and I stood there contemplating this conundrum, we overheard a girl and her friend pondering the same issue.  One said to the other, “It’s not like he’s The Doors Val Kilmer…”

Amen sister.  We moved on.

My next attempt struck gold in the form of a very cordial albeit brief chat with Sean Astin; yes Samwise Gamgee (The Lord of the Rings trilogy) for most people, but forever little Mikey Walsh (Goonies) for me.

Sean was…well, nice.  There’s no other way to describe him.

He talked enthusiastically about his three young daughters and seemed genuinely thrilled to be there.

Amusingly, he was wearing several layers of clothing though the rest of us “locals” were in t-shirts that day.  Apparently, 50-degree temps are still chilly for someone who makes their home in California.

The really cool part is that he handed over his personal email address and agreed to do an interview for Black Gate.

And then it was time to wade into the 500-plus booths laid out in rows across the show floor.  There we met artists, indy film producers and vendors from every merchandise category.

It’s clear why people fly in from everywhere to attend and most people we saw were wearing “all show” passes around their necks; it could easily take four days to cover everything in detail.

However, Goth Chick News is dedicated to a particular segment of participants and C2E2 is nearly as rich in material as the HAA.

Therefore, in upcoming posts I’ll be bringing you in-depth interviews with the creators of several cutting edge multimedia and even multi-platform projects.

But for now, I’ll list what I consider the “best of show” by Goth Chick News standards.

Bleeding Heart Bakery: In a world of extreme cake reality shows it’s hard to imagine that a cake, no matter how impressive, would belong at a show like C2E2 not to mention make this list.

Yes, this is a hometown business that most of you probably won’t be able to take advantage of, but even that didn’t diminish my giddy joy the extreme nature of Michelle Garcia’s creations.

I mean, anyone can make a pool table cake or a Coach purse cake, but how many can make a fully edible demon of Hell perched on a throne of screaming souls of the damned?  Take that Ace of Cakes…

Bleeding Heart’s web site is still under construction, but you can contact Michelle directly to see if she’d be willing to ship her smaller, cupcake-sized works of art (BHBSideshow@gmail.com).

Tiki Zombie Comics: I couldn’t go to a comic show and return without at least one really cool comic making the list, and I feel rather privileged to bring you a zombie comic (they had me a “zombie”) promising to be unlike any that have come before – move over Walking Dead, hang up your boots I, Zombie… here comes Tiki Zombie!

The creative and comical gents over at New Legend Productions are behind the book, written by Michael A. Gordon with art by Peter Cutler.

Tiki Zombie is set on the exotic island of Mooga Bali and legend has it that is where the entrance to the underworld lies.

The place is home to a lot of strangeness, and perhaps the strangest of all is the protector of the island, a cursed zombie lounge owner named Tiki Z.

Unlike his undead brethren, Z doesn’t crave brains; he craves beach parties and umbrella drinks.  Tiki Z is joined in his adventures by Hula Lu, the finest dancer in the world and a waitress in Tiki Z’s lounge.

The artwork is as colorful as a Hawaiian shirt and the whole concept is fun.  I mean, who hasn’t felt like the undead after a night of imbibing umbrella rum drinks and limbo-ing.

The site is currently displaying promotional videos for close to thirty comic books and comic-related projects.

Any artist, writer, or company may submit a trailer to be displayed on the site free of charge.

As you know, Goth Chick News bestows the coveted “Five Bat Award” on the one person, concept or product from each show which is the most outstanding example of creativity, innovation or which just plain makes us go WTF (which is no easy task by the way).  In an unprecedented move, this year’s C2E2 will have two awardees; mainly because they were both just too good to choose one.

So here they are, in no particular order:

Box O Zombies: Shawn Recinto and Immersive Realms, Inc have created a product that no game room, cubical or office should be without.

Shawn’s sons provided the inspirations when they cut up their little green army men to make them into zombies to attack their sister’s dollhouse (maybe the kids should get a Five Bat Award too).

Unfortunately, when Shawn looked online for some zombie figures similar to the little green army men he discovered that there were not many options.

He pitched the idea to a local artist and thus Box O Zombies were born.

Box set number one is available now from the Box O Zombies web site or on Amazon, each with six zombies in either “sickly slime green” or “puke purple.”

They’re made out of PVC (just like the army men) and are completely paintable.

Gorilla Tango Burlesque: Okay, I’m not even sure where to start with this one other than to say it is for all the boys in the Black Gate newsroom.

Billed as “the thinking geek’s burlesque” the girls of Gorilla Tango produce semi-naughty stage shows with names like “Fellowship of the Boobs: A Lord of the Rings, World of Warcraft, Dungeons & Dragons, Role Playing Game Burlesque” and “Temple of Boobs: An Indiana Jones Burlesque.”

Based on the number of guys wearing “Fantasy is the New Realty” t-shirts that I had to wade through to get close enough to talk to the performers, this was very nearly the most popular spot in the entire hall (Val Kilmer aside).

What I learned was that creator Dan Abbate and the talented crew of Gorilla Tango puts on some of the funniest, goofiest burlesque around.

Is it tasteful? I don’t know, I’m the last person you should ask, and besides, it’s not supposed to be tasteful.

The shows are meant to entertain, focusing on satire/parody and comedy (Dan Abbate is a Second City alum).

Despite their pun-filled titles, I’m guessing it’s not the boobs in these shows that make them enjoyable, it’s clearly the talent.

Though at photog Chris was quick to point out, the boobs are probably nice too.

So with sore feet and ringing ears Chris Z and I bid farewell to the bacchanalia that was C2E2 2012.  And as we pulled onto Lake Shore Drive he turned to me and said, “Did you grab a business card from that Gorilla Tango place…?”

[…] and New Orleans, LA); I met the talented ladies of Gorilla Tango Burlesque at this year’s Chicago Comic and Entertainment Expo (C2E2 for us cool kids) and I had to admit – this was something I’d never witnessed […]

[…] Last year at C2E2, Shawn Recinto and Immersive Realms, Inc made the “Best of Show” write up for creating a product that no game room, cubical or office should be without – namely a Box O Zombies. […]