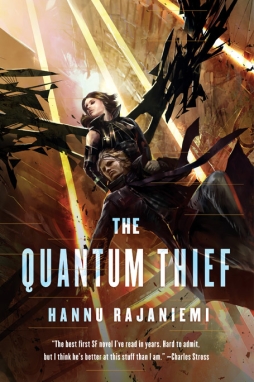 Centuries in the future, Jean le Flambeur is a master thief, imprisoned in a virtual-reality jail: every day he makes choices, and dies, and is reborn. Until he’s freed by a violent woman named Mieli from the edge of the solar system, and taken to Mars. There, he must regain old memories he locked away from all possible recovery when he was literally a far different person than he is now. A youthful detective, hi-tech superheroes, and posthuman intelligences are waiting to complicate his task, which seems to have ramifications on an interplanetary scale.

That’s a basic description of Hannu Rajaniemi’s novel The Quantum Thief, the first in a series following le Flambeur’s adventures (the second, The Fractal Prince, will be coming later this year). Uncertainty and possibility and identity are key themes in this book; appropriate, then, that its own identity is somewhat paradoxical. On the one hand it’s aggressively bleeding-edge, incorporating quantum theory and game theory and any number of up-to-the-nanosecond science-fictional ideas. But on the other it’s highly traditional, drawing from different lineages within the genre and outside it. 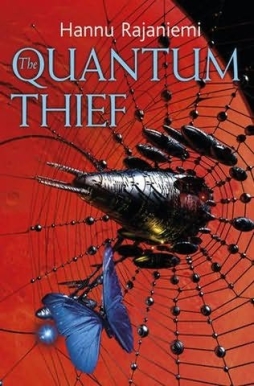 It’s primarily, I think, within a lineage that goes back at least to Arthur C. Clarke, fusing precise language and dramatic plots with a sense of the sublime clothed in scientific theory; a lineage that passes through writers like Bester, Brunner, and Gibson (the hard-as-nails female warrior guarding the male mission specialist is very Neuromancer), up through Iain M. Banks and Warren Ellis and Charles Stross. But then it also plays with another lineage, older than sf, one at least as old as Robin Hood: the righteous outlaw thief. You can see this character in Raffles or perhaps the French pulp character Fantomas, and in science fiction in Harry Harrison’s Stainless Steel Rat and Walter Jon Williams’ tales of Drake Majistral. And then beyond that the book throws in references to an idiosyncratic blend of classic and pop literature: Gogol, Proust, the Justice League.

Similarly, the outline of the plot’s easy to see. But Rajaniemi fills the book with setting-specific neologisms and technology based on scientific theory that hasn’t yet percolated through the mainstream. Rajaniemi almost entirely forsakes infodumps, allowing backstory to emerge relatively naturally through dialogue; a concept or term may be used for a considerable time before it’s actually explained. It’s certainly possible to follow what happens, precisely because the bones of the plot are familiar, but, as with much of the best sf, the wildness of the ideas gives the text a specific flavour. Language becomes de-familiarised: the reader ends up trying to puzzle out what the new words mean, and usually the answer comes from the way in which the given term is used in the narrative. We know the drift of the story. We’re seeing it from the inside-out, viewing the bones of the thing before we can fully perceive the skin of it.

Stylistically, this facade of neologisms works. The book’s a parade of science-fictional ideas, which helps to give muscle to its language. There’s a precision to Rajaniemi’s new words; it’s as though he’s found some verbal essence of sf, the poetic rhythm of the genre, which animates the diction of the book. That’s as well, since otherwise there’s a spark missing — the dialogue’s crisp, but not witty in the typical manner of a hard-boiled caper novel. (An apparent reluctance to use contractions doesn’t help.) 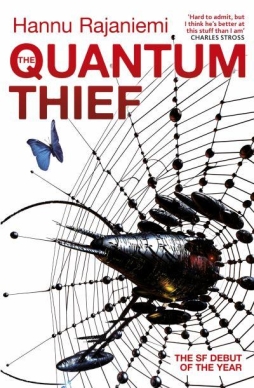 Rajaniemi does juggle the points of view of his different characters quite well, nicely drawing the set-pieces toward a climax. Given how much he plays with memory and identity, his choice to make the structure of the novel relatively linear is notable, though perhaps wise — there’s much to absorb here, if only in terms of ideas. I’m not convinced, though, that those ideas serve the characters. Which may be deliberate; Rajaniemi’s playing with archetypes, and playing as well with ideas that undermine the idea of human character as it’s conventionally understood.

Rather bravely, Rajaniemi makes his thief far less sympathetic than his detective, and indeed overall less competent. Among all the wonders of the future — not quite the post-scarcity setting of Iain Banks’ Culture novels, but not far off — Jean le Flambeur seems somewhat dull. He’s not as colourful as the typical gentleman criminal, not as memorable as Raffles or Harrison’s Slippery Jim di Griz. Mieli, his minder, is far more interesting; she seems to feel things more strongly, seems to be more intriguingly pulled in different directions. By comparison, Jean feels like a burn-out.

As we find out, though, Jean has a long history behind him. It happens to be one that he doesn’t fully know. Memory, in this book, is malleable. Identity therefore takes on new meaning. The traditional idea of character is subverted; if we don’t remember who we are, if our experiences don’t shape us, what are we? Can one have character without memory? Does character have meaning in a world where human identity can be uploaded, and bodies remade at whim? 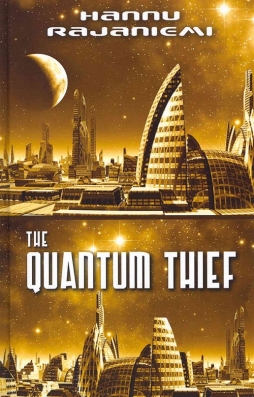 These are powerful questions, but I found myself unsure that the book succeeded in really answering them. Rajaniemi’s grasp of character didn’t seem profound enough to really grapple with the issues his imagined setting creates. That may not be significant; the plot’s effective, the adventure’s fast-paced and tight, and Rajaniemi weaves science into his prose and plot and setting exceptionally well. Quantum entanglement, game theory, mind uploads — it’s not that these ideas are startling on their own, it’s the way in which he mixes them together, has one influence the other, builds new technologies out of multiple principles. It creates an odd firework-like feel to the book, especially as one struggles to navigate the early part of the novel.

I can’t help but feel, though, that the sf conceits remain on the surface. There’s no prolonged investigation of what they mean in terms of character, and the characters themselves stubbornly resist more than a token sense of depth. The language, so strong in terms of its presentation of theory and technology, doesn’t serve the individuality of the characters especially well. Again, one can argue that this is not strictly speaking necessary, given the pace at which the story moves, but it seems to me to contribute to the sense of the story as a facade; a flat narrative driven by big ideas. For what it is, though, that works. 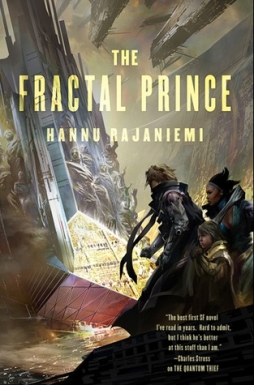 By the end of the book, questions of who is right and wrong, who really understands the nature of reality, seem to become unimportant; it’s all a game, we learn, when you look at it from a higher perspective. Or if not a game, then a prison; the opening prison is only the first of many prisons le Flambeur finds, one nestled inside another, so that what seems to be an escape into freedom turns out to be only escape into more complex bondage. Rajamiemi manages to make this point while still keeping his story feeling relevant, but it does mean that the resolution of the basic theme of the law versus a promethean rebel becomes simply a question of which way the author wants to twist the plot.

Near the end, we find the past of Mars has been rewritten, that everything we thought we knew was wrong. This felt improbable to me; as with most grand conspiracies, you can’t help but think that someone would have noticed something, that someone would have spilled the beans. But I’m not sure that this sort of quibbling matters. For all its sheen of newness, this is the ultimate sf stereotype: using science to tell a story in which the idea of character is superficial, or negotiable, or unimportant. The idea is all. The person, the inner life, is relevant insofar as it serves the tale being told. Rajaniemi does this quite well. The Quantum Thief is a very well-told tale. I wonder, though, how it’ll be read in a few years, or in a generation or two, when all the apparent newness is worn away and only the genre conventions remain. It’s a solid yarn; maybe that’ll be enough.