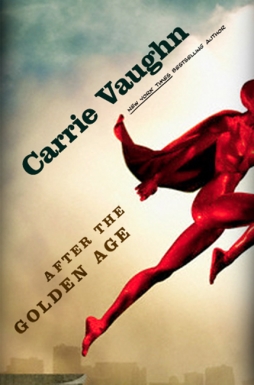 Celia West is an accountant in her mid-twenties. She seems normal enough, but appearances are deceiving. Celia lives in Commerce City, home to a number of super-powered heroes and their archenemies. She’s not one of them, though, being in fact the non-powered daughter of two of Commerce City’s greatest champions, Captain Olympus and Spark, leaders of the group called the Olympiad. Now the Olympiad’s worst enemy, the Destructor, has been arrested, and Celia’s skills as an accountant can help to find the fiscal evidence to put him behind bars — only, once, years ago, Celia joined the Destructor as an ally. Can she overcome that act of youthful rebellion to build her own life, and see that justice is done?

That’s the question driving the plot of Carrie Vaughn’s novel After the Golden Age. Super-heroes arguably started in prose, with the exploits of Zorro, the Spider, the Shadow, and Doc Savage, to name some of the best known, but the full-blown super-hero — with exceptional powers, a distinctive costume, and an alter-ego — was really a development of comics. A costumed hero is inherently visual, and many of the best super-hero powers lend themselves to illustration. Can prose present a super-hero story as well as comics can? It’s notable that a lot of the better prose super-hero tales have been shorter works: the best of the Wild Cards shared-world books, for example (a series for which Vaughn writes), or the 2008 anthology Who Can Save Us Now?, or Daryl Gregory’s excellent story from the same year “The Illustrated Biography of Lord Grimm.” Perhaps the strangeness of powers and costumes works better at that length. 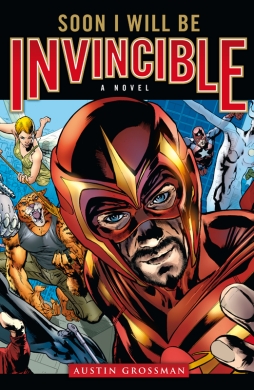 One of the higher-profile original super-hero novels of recent years (that is, a novel not set in a pre-existing super-hero universe) is Austin Grossman’s Soon I Will Be Invincible. That book was concerned in large part with the physicality of super-heroes, with the warping of the body by power; Vaughn’s more interested in what power, or the lack of same, does to the mind. Celia’s story is mainly about family, and relating to family as an adult. How, as children, many of us view the adults in our lives as heroes; and how one grows out of that.

It’s a strong idea, based in character. Unfortunately, Vaughn’s sense of character didn’t always seem to be deep enough to sustain the theme. The super-hero genre is notoriously tricky on that score; how relatable, how human, can your characters be when they’re not only gifted with super-powers but, more incredibly, choose to dress up in costume and fight crime? How many people, upon finding that they could fly or control fire or were invulnerable, would put on a mask and go looking for trouble?

Vaughn never directly addresses this question that I can see. We find out a bit about the first hero in her world, but not what drove him; or why some people chose to emulate him. We never really find out why the other heroes look up to the Olympiad, who seem unremarkable if not unheroic. Crucially, we don’t find out what specifically drove Celia to the stage of wanting to join the Destructor of her own free will. 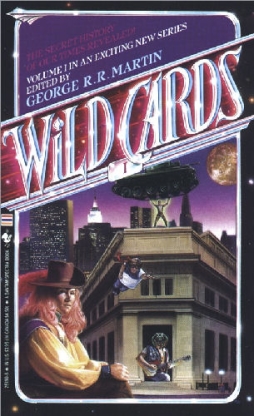 And the characterisation in general is flat enough that these omissions are particularly noticeable. The characters remain one-note throughout. They’re never surprising, and they register their emotions in simple, obvious ways. This is a book in which the female lead responds to the stress of being laid off from her job by watching TV in her pajamas while eating ice cream out of the carton.

Conversely, the plot’s nicely-machined. Vaughn’s put together her world with care. It’s necessarily smaller-scale than a traditional super-hero universe, as it has to fit into a single novel, but it’s pleasingly logical, and Celia’s investigation of the secrets behind the powers develops nicely. The climax develops naturally out of preceding events, and very effectively brings together and resolves all the book’s various strands.

Vaughn’s prose is also effective. It’s tight and clear, commendably fast-paced, unobtrusively moving the story onward at a quick march. There are few memorable passages, yet still enough rhythmic variation to keep a reader interested. Action scenes are surprisingly rare, but well-handled when they arise. 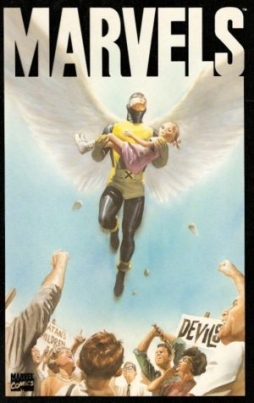 The relative rarity of those action scenes is worth discussing. Despite the presence of super-heroes, After the Golden Age isn’t reallty a super-hero story. Like the Kurt Busiek/Alex Ross Marvels, one of the best-remembered super-hero comics of the past two decades, After the Golden Age tries to tell a story using super-heroes as a narrative element, but without all the conventions of the genre — without fights being central to the plot, for example. The super-heroes give a specific resonance to the story, they embody the themes in a way that a mimetic story couldn’t, but they don’t shape the structure of events.

Where Marvels tried to present a slice-of-life story, though, Vaughn seems to play about with another genre: romance. Celia’s relationships are a major sub-plot in the book, and very elegantly reflect and dovetail with the main plot of the Destructor and the super-heroes. And mixing the genres occasionally plays against expectations amusingly. In some ways, though, the romance element tends to undercut the main theme of the book, which I take to be Celia’s growth as a person. By the end of the book, she’s happy with a man she loves, but it feels (due to the specific man in question, who he is and his powers and his pre-existing relationship with her) as though she’s merely found a surrogate parent rather than established her individuality — as though, having broken free from her domineering father, she’s ended up in a necessarily junior position to another powerful older man.

The Golden Age of comics was during World War Two, when individual issues sold in the millions. The continuity of the heroes in Vaughn’s book only stretches back a few decades. Why her title, then? I think it’s a reference to the story’s themes. The movement from childhood to adulthood, immaturity to maturity. The golden age of science fiction is 12, it has been said, and the same is largely true for comics. Celia’s struggling to find her own way in the world, no longer a resident of her parents’ rich office tower. For her, the whole book takes place after the golden age of youth. Given the (often accurate) perception of super-hero stories as kids’ lit, the genre trappings seem to resonate with the theme. The book’s conceptually sound. I have quibbles with some of the choices made, and I wish it had probed deeper at certain points, but this is a decent story told with wit and a solid point.