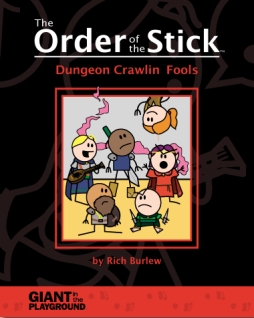 Dying is easy, the old saw has it, but comedy … that’s hard. Only — what happens if we’re talking about a world in which miracles happen to order, and people come back to life whenever a priest wants? Dying suddenly isn’t quite so easy. But comedy, real comedy … that’s still pretty hard.

Fantasy’s no more or less risible than almost anything else in life, and you can find comedic fantasy good, bad, and indifferent. I want to talk about one particular example. Lately, I’ve been rereading a lot of Rich Burlew’s webcomic, The Order of the Stick. It’s a successful, funny fantasy; impressive, since it looks like it should have no business succeeding as well as it does. It’s not just a fantasy comedy, it’s a gaming fantasy comedy. Clearly, the strip’s appeal is going to be somewhat limited.

The main characters are adventurers in a fantasy world that operates according to the rules of Dungeons & Dragons (version 3.5); inevitably a good part of the comedy comes from the characters consciously manipulating the rules of the game, and commenting on its conventions and mechanics. But there’s more to it. The strip isn’t just about the game, nor is it just a showcase for Burlew’s killer sense of humour. The comic’s run for over eight hundred installments up to this point, plus extra stories in various print collections; it’s developed a coherent story, and surprisingly sympathetic characters. It’s gone from a gag strip to a fantasy epic — a nice trick, given that the story’s told with stick figures. 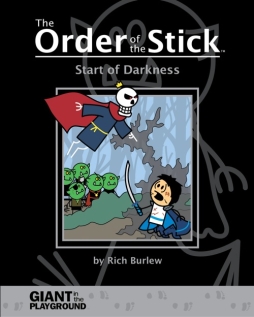 The graphic style of the comic gives it its name. The characters aren’t exactly stick figures — their torsos have a bit more definition, their faces and heads have individual details — but they have that level of simplicity to them. Burlew’s palette is deliberately limited, but effective; flat colours outlined by thick black lines make simple shapes that build a world. It’s an example of how effective pure cartooning can be, how sometimes a strip can come to life by turning away from detail and realism.

Most comics artists will tell you that it’s at least as difficult to draw cartoony figures than realistic ones. When you’re using fewer lines, each of the lines that you do put down has to do more work; has to be more precise. You can see this in Burlew’s work, which takes cartooniness to an extreme level of abstraction. For his strip to succeed, he not only has to be able to constantly find new character designs within his style, but more crucially, he has to get every gesture and facial expression just right. He has, in a sense, no margin for error. And the longer the story’s gone, the more complex the characters, and the more the humour’s come to be based in those characters. 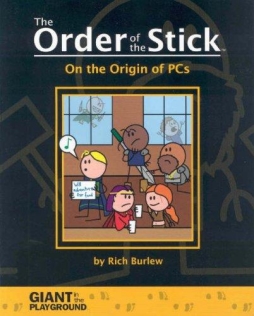 This means that Burlew’s strip is an exercise in pure craft. Leave aside the gaming focus, and you find that it lives through the effectiveness of the comics storytelling; through Burlew’s ability to move the eye from word balloon to word balloon, panel to panel, in the right direction and at the right pace. It is true that for the most part he’s fairly conservative in his page layouts — he relies on a grid-like structure of square and rectangular panels separated by thick black gutters. There’s nothing wrong with that, though, and Burlew does vary his approach often enough to give the strip some real visual dynamism. His storytelling’s developed over the course of the story; he’s consistently found creative graphic solutions to his narrative challenges — how to handle flashbacks, for example, or how to depict large-scale battles.

This is not to say that Burlew’s a virtuoso along the lines of a Dave Sim. But he’s a solid craftsman with a deep understanding of the rhythms of comedy and of narrative, and a strong sense of how those rhythms play out on a comics page. The story he tells isn’t over-complex, but builds nicely, and works in some strong character developments. Which is remarkable, as Burlew himself points out some of the absurdities of how people would act in a world defined by game rules. 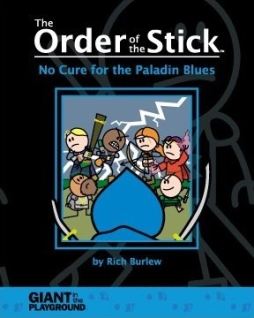 I think enough of his punchlines, and even some story points, are specific enough to D&D that a non-gamer would have difficulty getting into the strip. That said, if you know the subject, the humour works. It ain’t always sophisticated. But the strip’s an example of how difficulties sometimes become opportunities; Burlew can sometimes work the rule system to bring together a gag, character moment, and payoff to a strip all at once.

Burlew builds a strong enough story, around heroes and villans with distinct enough motives, that the absurdities of the world don’t really matter. The craziness of “the rules” doesn’t take away from the fact that we know how to relate to the characters we’re reading about. And the rules don’t seem to hinder the development of the overall plot. 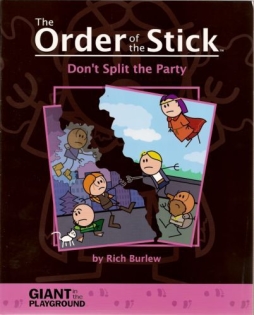 The story develops out of the rules of the game. Which is appropriate, since the game Burlew’s using is at heart a storytelling game. Burlew’s strip shows, oddly, how Dungeons & Dragons both succeeds and fails at being a venue for storytelling; it fails because the rules don’t always allow for the creation of a coherent setting, but then also succeeds — because, for all the craziness of the world, Burlew’s strip works. It’s funny, and it makes you care about the story and the characters. It’s an odd kind of epic fantasy; but epic fantasy’s what it is, and I find it more involving than a lot of by-the-numbers serious prose tales.

Narrative isn’t a game. You can’t make up a story by following rules, much as some people seem to want to suggest the contrary. But if you’ve got somebody who understands narrative, they can build a story out of unpromising materials. Burlew’s pulled it off with The Order of the Stick.

What a nice surprise to find one of my kids reading an article about their favorite comic strip today… especially when I discovered they were at the BLACK GATE blog. (I’m pretty sure none of them have read it of their own accord before!)

ORDER OF THE STICK is a complete success as a comic strip, I think. For one thing, it’s just about the only one that all three of my children love without reservation (and they never agree on ANYTHING). So do most of my adult friends.

I especially enjoy the way the strip makes me nostalgic for D&D (the way I used to play it as a teenager), while simultaneously engaging me with a gripping and funny story. It entertains on so many levels it’s hard to keep up.

Ah, Order of the Stick — one of those comics I read every day, just in case a new one came up.

Though it has its rivals. Indeed, even in the gaming comics, I also like Rusty & Co:
http://rustyandco.com/

January’s blogosphere round up | On a Pale Star

[…] David Surridge has A Few Words About Order of the Stick over at Black Gate. Since it’s a favorite webcomic of mine, I wanted to share. “The strip […]

[…] comics, Jack Vance’s Dying Earth — I’ve even written about Fighting Fantasy gamebooks and a D&D webcomic drawn in stick-figures. But personally I generally prefer complex fiction, ‘literary’ fiction if you must, that also […]