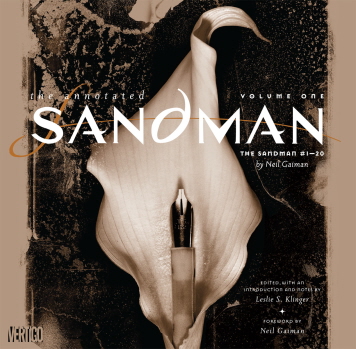 First time I met Neil Gaiman was at the 16th World Fantasy Convention in Schaumburg, Illinois. It was 1990, and Gaiman was busy taking the comics world by storm with his new Vertigo title The Sandman, which first appeared in January 1989.

The next year he won the World Fantasy Award for Best Short Story with the Sandman story “A Midsummer’s Night Dream,” but in 1990 he was a relative unknown (for those who didn’t read comics, anyway). I remember thinking how cool it was that I could run into L. Sprague de Camp, Julius Schwartz, Bob Weinberg and Neil Gaiman, all at the same convention.

In 1999 my friend Andy Heidel, publicist at Avon EOS, sent me an advance proof of Gaiman’s second novel Stardust, the edition illustrated by Charles Vess, for review at the SF Site. I couldn’t find a reviewer, and begged Alice Dechene to do it. Vertigo liked her review so much they blurbed it on the collected edition. Which is why my wife has her name on the back of one of the best-selling graphic novels of the century — something I’ve never accomplished, and I’ve written about a hundred more reviews than she has.

Gaiman’s career has been meteoric ever since, but I still consider the 75 issues of The Sandman to be some of the best work he’s done. I’m not alone — The Los Angles Times Magazine calls The Sandman “The greatest epic in the history of comic books,” and it’s been in print in graphic novel format for over two decades. And our Managing Editor, Howard Andrew Jones, author of The Desert of Souls, says Sandman #50 was a crucial influence on his own writing, “and the one that fired my interest in the tales of the Arabian Nights.” 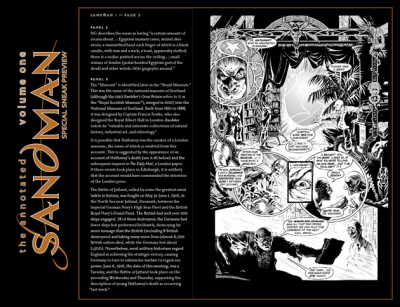 The Sandman follows the adventures of Dream (and occasionally his sister, Death) who, as the comic begins, has been imprisoned for 70 years. He engineers his escape and returns to his realm, the Dreaming, to set right all that’s gone wrong in his absence — including rounding up those nightmares who’ve escaped into the real world.

Now Vertigo has released a deluxe hardcover volume of The Annotated Sandman, collecting the first 20 issues with a page-by-page, panel-by-panel examination of the series, featuring commentary and explication of hidden references right alongside the original black & white art — and a brand new forward by Neil Gaiman.

It’s a beautiful volume, in an oversized coffee table format, and the definitive edition of one of the most important comic series of the past quarter century. Klinger’s notes make fascinating reading, and the original comic benefits greatly from the high production values.